The St. Eustace District Itinerary 30 starts from where you stopped before, the square in front of the Church of St. Louis, to enter a maze of streets and squares full of art and tradition, marked by the presence of various “animals“, from crows to elephants.

From crows to swallows

Take the nearby Via del Pozzo delle Cornacchie, whose name derives from a fountain in the shape of a well built here by Cardinal Thomas Wolsey, who had his coat of arms consisting of two crows on the sides of a rose sculpted there.

The street comes out in the Rondanini Square, once called Aquilini Square because here lived Antonio Aquilini, an excellent painter of 15th Century better known with his nickname of Antoniazzo Romano. The Cardinal Wolsey had a beautiful palace built in the square, but he never lived in it, so he gave it to the Cardinal Rondanini, who affixed his coat of arms with three swallows and from which the square took its present name. The Rondanini family became famous for having given their name to Michelangelo’s famous “Rondanini Pietà“, which was exhibited by the family in the other Rondanini Palace on Via del Corso and is now in the Sforza Castle Museum in Milan.

At number 48 in the square there is a plaque commemorating Felice Cavallotti, great orator, politician and playwright who “here prepared his battles for democracy, freedom, justice“. 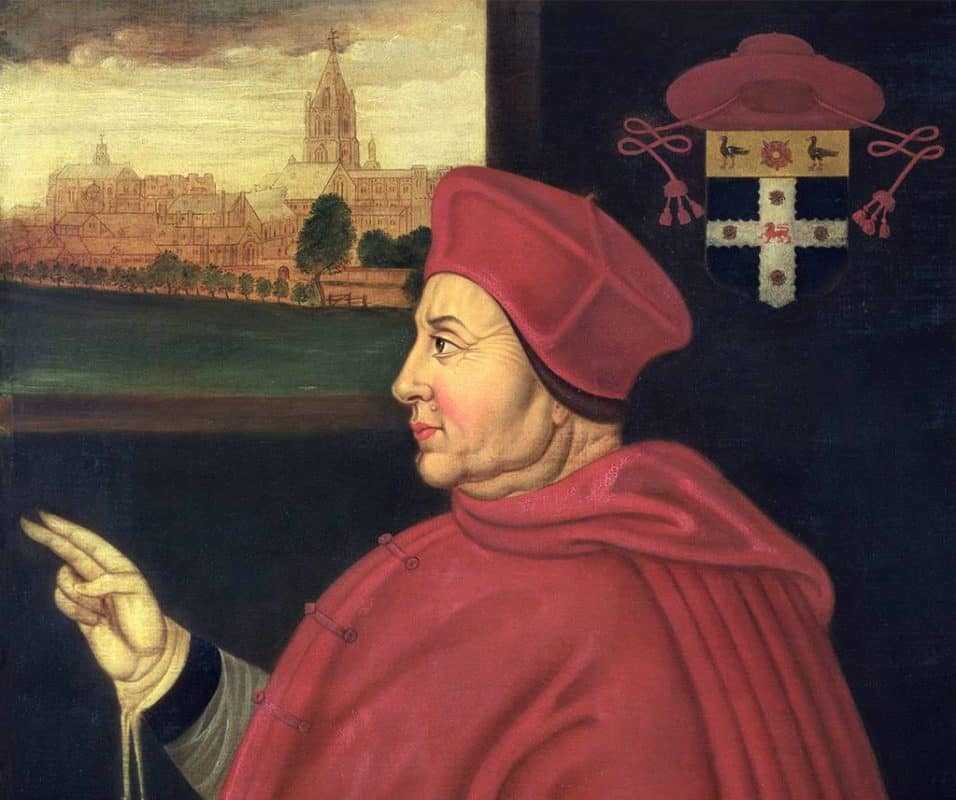 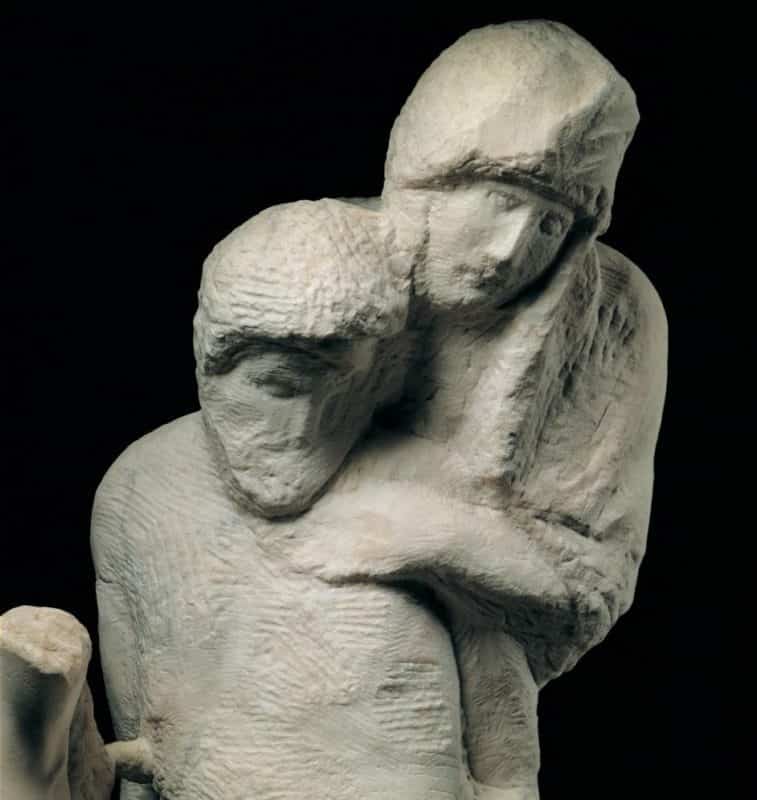 THE ROAD OF THE SOW

From crows and swallows we move on to a less noble but tastier animal: the sow (“scrofa“), to whom the long road of the same name is dedicated.

According to someone, the name derives from a marble bas-relief, now walled up on the side of the former Convent of St. Augustine, which was part of a fountain created by the will of Pope Gregory XIII: from the mouth of the animal came out a gush of water that fell into a basin, now fixed at the corner of Via dei Portoghesi.

According to someone else, the name of the street came from the sign of a inn existing here since the 15th Century, which had just the design of the sow. In fact, several documents prior to the construction of the papal fountain name this street by adding the word “sow”, which would suggest that it was not the fountain that gave the name to the street, but rather the opposite.

On Via della Scrofa, which belongs to the St. Eustace District only from number 34 to number 84 (the rest is part of the Campo Marzio District), there are the Palace of the Germanic Hungarian College, the Angelica Library and the aforementioned Augustinian Convent.

The first of these buildings, very large and with three different façades, opens at number 70 of Via della Scrofa with a beautiful door with Doric semi-columns, through which you can enter a small courtyard decorated with a pretty fountain attributed to Gian Lorenzo Bernini formed by a cup held by two playing tritons, surmounted by a dragon and with a painted landscape as background.

Also the Convent of the Augustinians overlooks the square, the Via di Sant’Agostino and Via della Scrofa. Unfortunately, the continuous renovations have damaged the 15th Century architecture of the building and the cloister: it became the seat of the Ministry of the Navy after 1870 and is now the seat of the Attorney General’s Office.

The façade on Via della Scrofa is very wide, with two main doors at number 80 (it leads into a small courtyard where there are ancient remains of sarcophagi and tombstones) and at number 82 (it opens into an atrium of great scenic effect, embellished with columns and large niches). 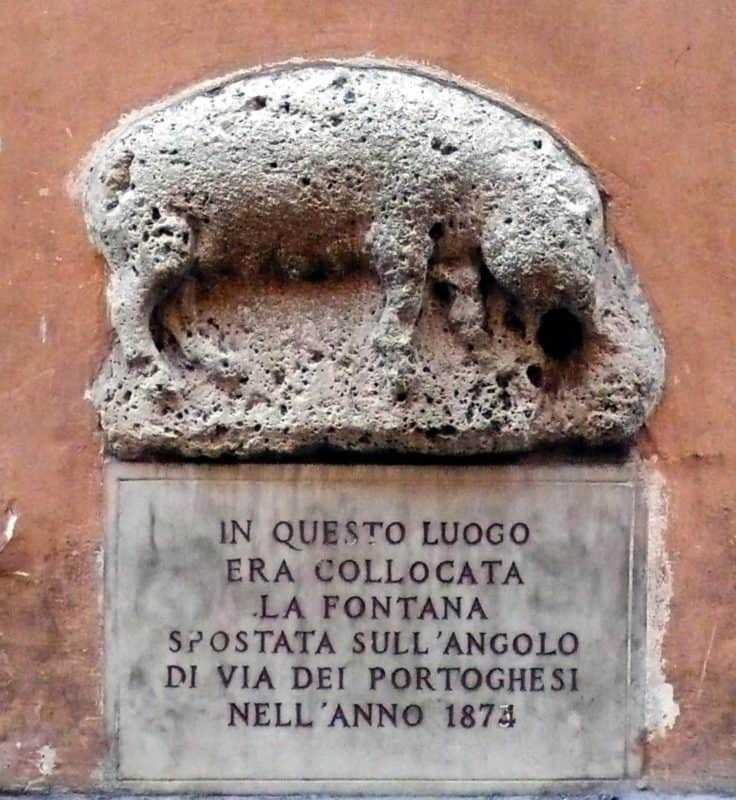 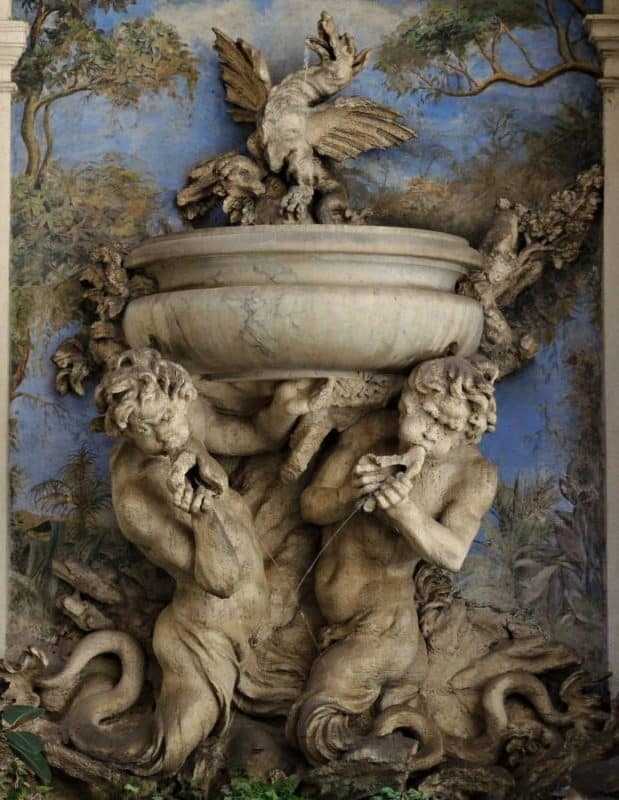 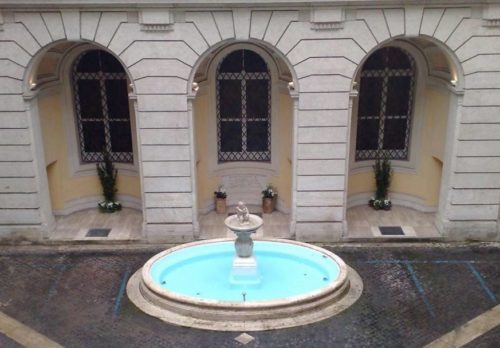 The Church of St. Augustine

THE CHURCH OF ST. AUGUSTINE

The name of Saint Aurelius Augustine, bishop of Hippo, brightens up the square all gathered around the church dedicated to him: placed on a high staircase, it recalls the protorinascimental characters of St. Mary of the People.

Around 1479, Cardinal William of Estouteville had this building built on a previous chapel, too small and too close to the street level, so much so that it was continually subject to the flooding of the Tiber River. The new church was designed by the Florentine architect Leon Battista Alberti and built in 1483 by Jacopo da Pietrasanta, who used without hesitation the travertine stolen from the Colosseum. The two large lateral volutes, which partially hide the buttresses, were added by the architect Luigi Vanvitelli, who also built the new convent and cloister between 1746 and 1750.

In the past the Basilica was famous to admit the courtesans, to whom the first pews were reserved, in order to protect them from the sight of the people and to avoid distractions among the faithful: in the church there were the tombs of some of them, like Fiammetta Michaelis, Cesare Borgia’s lover.

The sober façade is split into two orders: the lower one has four pilasters on a high plinth and the central door is finely decorated, and in the tympanum there are two geniuses holding a garland with the coat of arms of the Cardinal of Estouteville.

Cross one of the main doors and admire the interior with three naves, situated halfway between the Gothic and the Renaissance style, which preserves three absolute masterpieces in addition to many other important works of art.

As soon as you enter, lying on the counter-façade, you can admire the famous “Virgin of childbirth“, by Jacopo Sansovino in 1521, surrounded by votive offerings and pink and blue bows in spite of the traditional legend, which states that this statue was created by recycling an ancient sculpture representing Agrippina who held the little Nero in her arms.

Go now to admire one of the pillars of the nave, on which the great painter Raphael Sanzio painted in 1512 a fresco depicting “the prophet Isaiah“, cause of serious controversy for the very exorbitant price requested, which led the client to request to Raphael’s rival, Michelangelo Buonarroti, a technical expertise on the evaluation to be given to the work (expertise that was largely in favor of the price requested by Raphael).

Although many other great artists collaborated in the decoration of this church, with works such as the “St. Augustine” by Guercino, the monument to “St. Monique lying” by Isaia from Pisa and the high altar designed by Gian Lorenzo Bernini, you should go immediately to the first chapel of the left aisle, where it is possible to admire the superb “Virgin of the Pilgrims” painted by Caravaggio.

THE VIRGIN OF THE PILGRIMS BY CARAVAGGIO

Caravaggio chose to use as his model a famous prostitute of Rome, Maddalena Antonietti, also taking advantage of the fact that as said the church was also frequented by courtesans, and therefore this detail could not create excessive scandal. The velvet dress worn by the Virgin highlights the typical cloth of the prostitutes of Rome, and the house looks like a hovel instead of the famous luxurious Loreto house.

However, are the pilgrims to attract the attention of the viewer, with their ragged clothes and their swollen and dirty feet: they do not disrespect the Virgin, but rather symbolize the obedience and fatigue of the Christian faith.

You can discover more about this marvellous painting booking the Rome Guides Caravaggio Tour, that will let you enter in the soul of this “cursed painter”.

Next to the Church of St. Augustine is the Angelica Library, founded in 1614 by the Augustinian Father Angelo Rocca and acquired by the Italian State after 1870. Here are preserved many manuscripts (by Cola di Rienzo, Torquato Tasso, Sixtus V and so on), incunabula and precious volumes; the library, whose main hall can be visited, still houses the Arcadia Academy and preserves portraits of some poets belonging to the association. 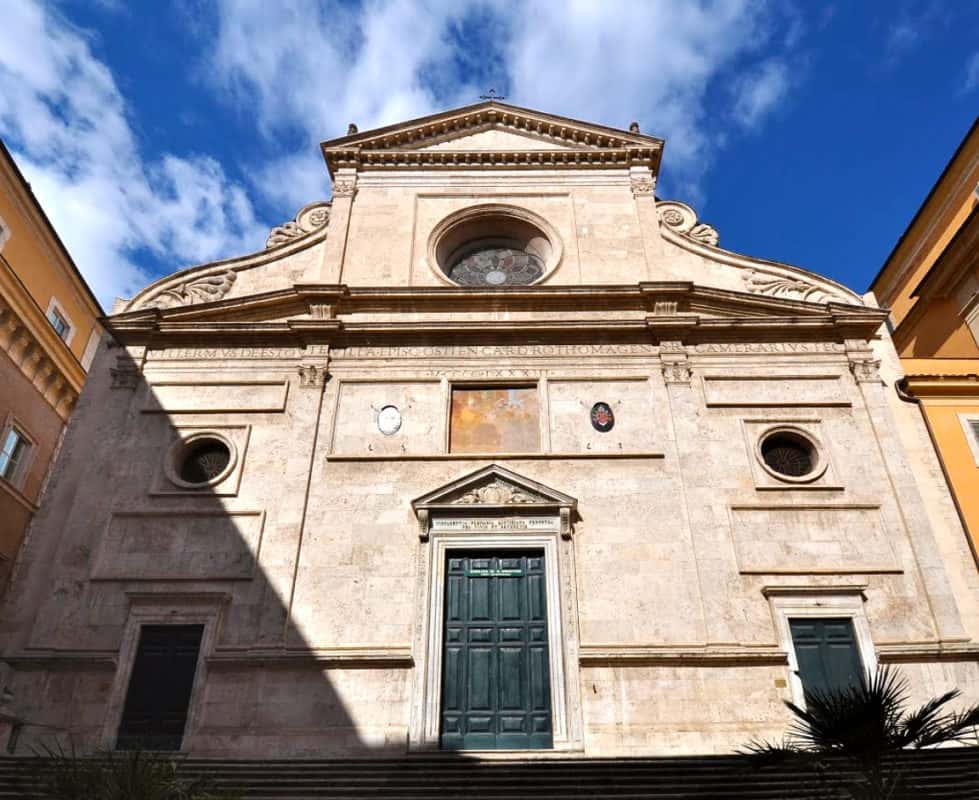 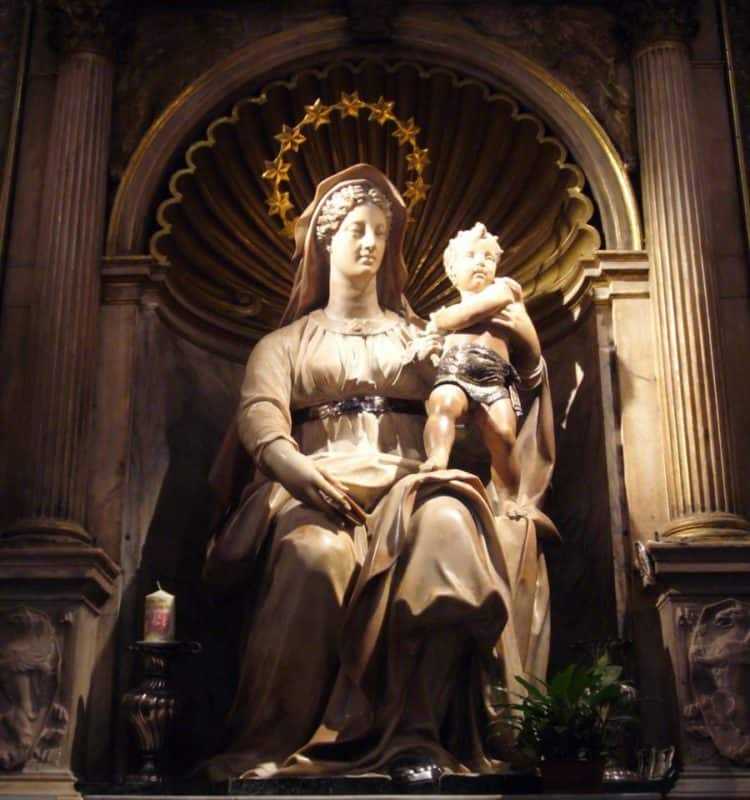 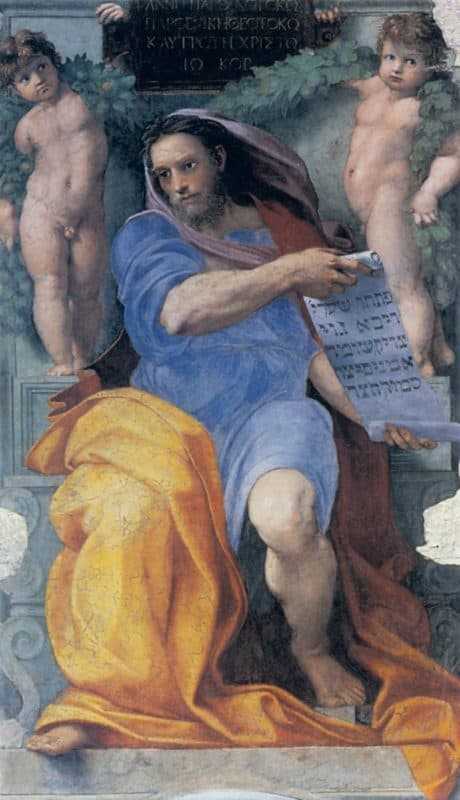 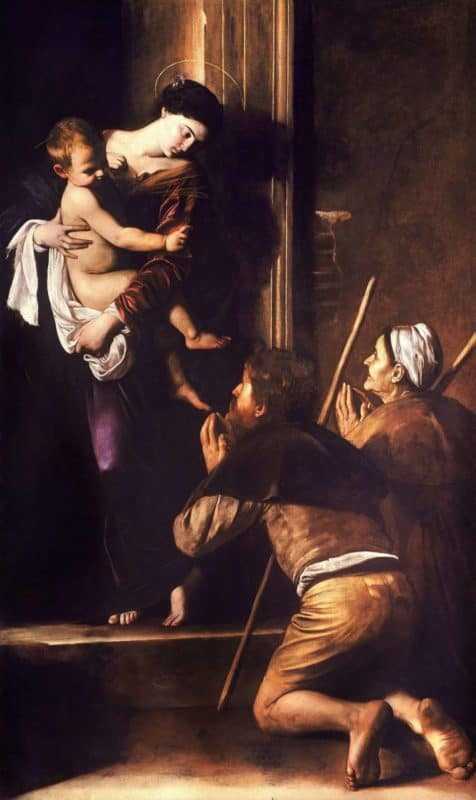 Immediately at number 35 you will see an austere and massive building: it is the Baldassini Palace, built around 1520 by Antonio Sangallo the Younger and decorated by Perin del Vaga for the Consistory lawyer Marchionne Baldassini, who died in 1525 and is buried in the Church of St. Augustine.

The palace was very prestigious: Monsignor Giovanni Della Casa, Secretary of State of Pope Paul IV, and Cardinal Pietro Bembo, among others, lived there. In the 19th Century, a printing press was installed in the palace and in 1875 Giuseppe Garibaldi lived there: tradition says that when he arrived in Rome, the hero was welcomed by great enthusiasm and was taken in a carriage drawn by admirers (who replaced horses) to the Dragoni Hotel. As the crowd continued to applaud him, perhaps expecting a speech, Garibaldi, eager to rest, said only three words (“Romans, be serious!“) and from a back door he left the hotel to take refuge in this house, at the time owned by some of his friends. His residence in the Baldassini Palace is remembered by a plaque on the façade.

If the courtyard of the Baldassini Palace, with three arches and Doric pillars, is a beautiful masterpiece of architecture, the most iconic decoration of the building is on the cornice above the first order of arches: it is the lovely figure of Annone, a small elephant transported to Rome as a gift for Pope Leo X, who was very affectionate to it, to the point of hosting it at the papal court in a noble stable and of suffering and crying for a long time when the animal died.

Leave the courtyard and now reach the Coppelle Square. 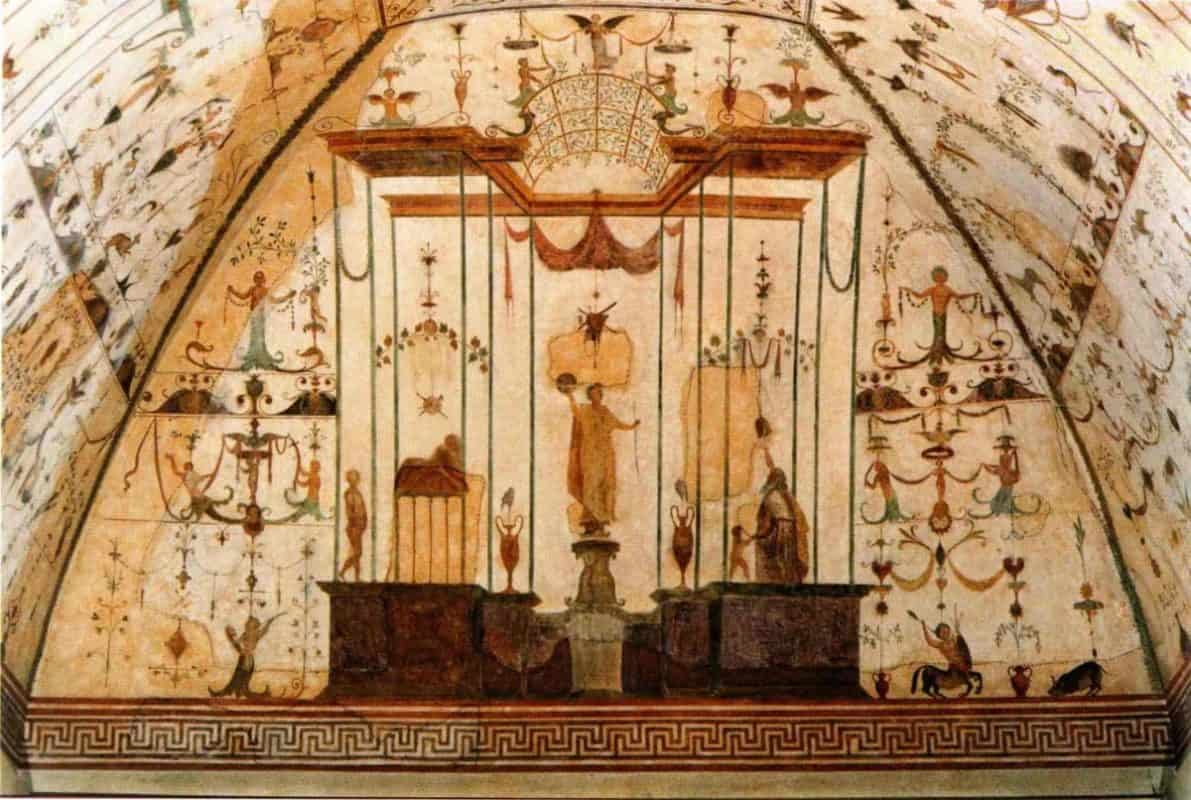 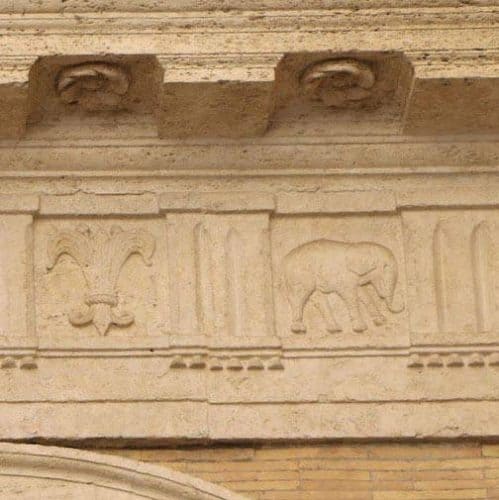 The word “coppella” comes from the diminutive of the Latin word “cupella“, which means barrel or vat: the cupella was therefore a wooden container, a sort of barrel that contained about 5 liters of wine. It is a typical dialectal expression, which you can find in several Romanesque sonnets. Therefore, the street and the square are reminiscent of the area where the workshops of manufacturers and sellers of cups were located.

Another name of the area was “Pieta Square“, with reference to the Arcus Pietatis erected here in honor of the Emperor Trajan and of which bas-reliefs were found representing the Provinces of the Empire that were recommended to the mercy of the Emperor: these decorative fragments were misinterpreted in the Middle Ages as explanatory of Trajan’s piety, so much so that Dante Alighieri himself in the X Chant of Purgatory lends faith to this legendary imperial piety and describes the episode of Trajan who does justice to the poor mother who had her son killed and who turns to him to gain revenge.

THE CHURCH OF THE HOLY SAVIOUR OF THE COPPELLE

The square, which has always been a market place and for this reason very lively, is divided into two parts by the Church of the Holy Saviour of the Coppelle, probably built in 1196 and consecrated by Pope Celestine III. In the 15th Century it was granted to the Brotherhood of the Saddlers who abandoned it in the 18th Century, when the architect Carlo De Dominicis was commissioned to build the new façade. In the 19th Century other restorations destroyed the pre-existing medieval structures, except for the bell tower which dates back to the 12th Century.

The interior with a nave and two aisles preserves a very remodeled 14th Century fresco depicting the “Dormitio Virginis“, a 16th Century wooden Christ and the funeral monument of Cardinal Giorgio Spinola, executed by Bernardino Ludovisi in the 18th Century.

Leave the church and, before you embark on another Itinerary, close the St. Eustace District Itinerary 30 thinking of the drinks that cheered the Romans in this square, when the tavern was the only meeting point for the workers who forgot their misery in front of a glass of wine. Take a break, taste a glass of Frascati Superior, an excellent white wine from the Lazio region, and recover your energy. 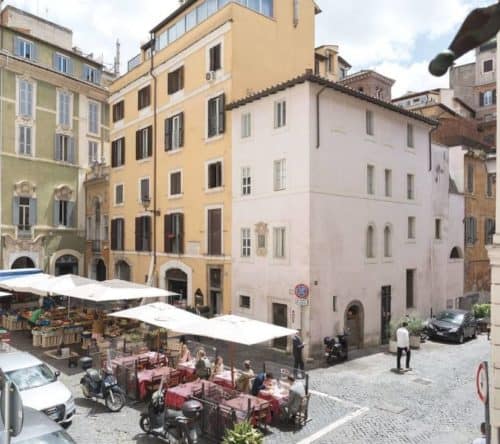 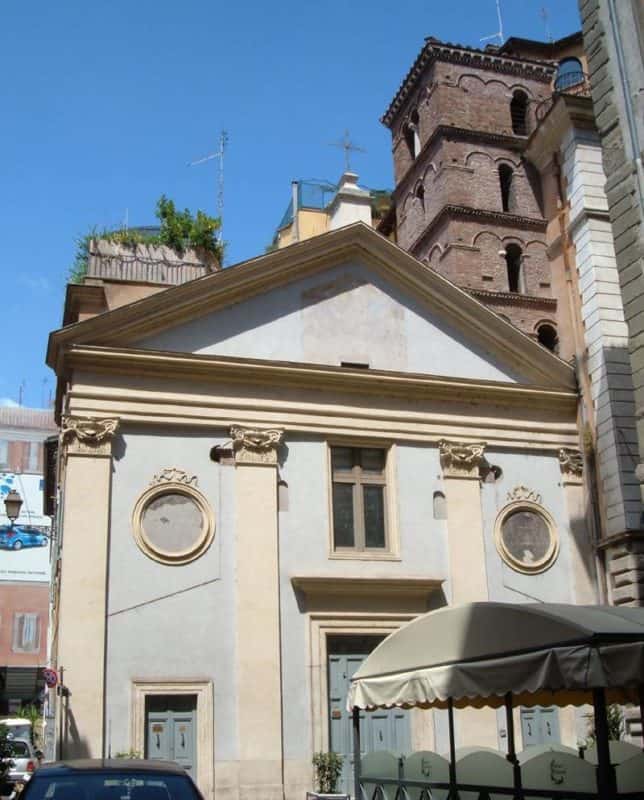 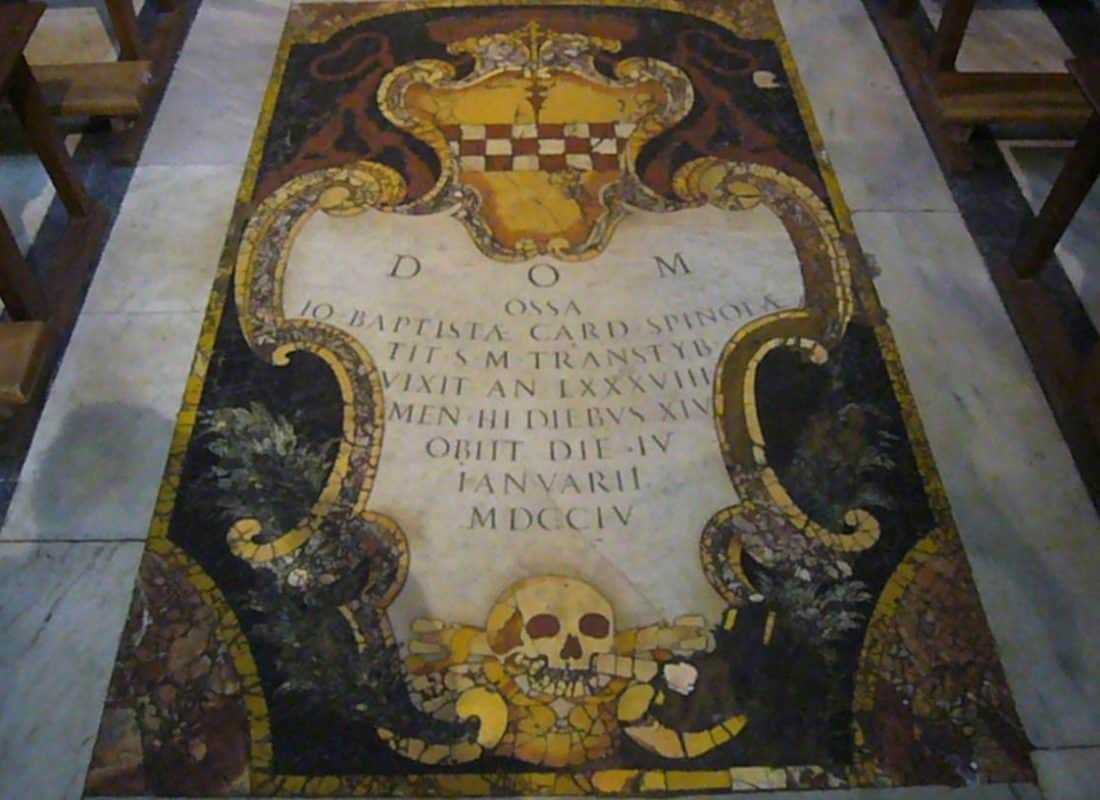