The St. Eustace District Itinerary 31 starts from one of the most extraordinary squares of Rome, dominated by the colossal Pantheon, which however will not be treated in this Itinerary, because it falls within the boundaries of the Pigna District.

Why does the square in which you are located have this name? It is a confidential nickname, with which the Roman people have always renamed the Pantheon because of its circular shape. In fact, in this area, legends and rumors overlap without a break: think that for centuries the people told that the moat around the Pantheon was created by a devil who ran countless times around the monument, enraged by the mockery suffered by a derisory magician.

The square, which as said belongs only in part to this District, was completely paved in wood in the late 19th Century, thanks to the gift of many strips of quebracho (equatorial wood covered with bitumen) sent by the Italians of Argentine who wanted, in this way, to preserve the sacredness of the place from the noise of horses’ hooves.

On the two opposite sides of the square you can admire two very symbolic decorations. On one side, at number 63, there was the old Montone Hotel, later become the Albergo del Sole (Hotel of the Sun), where the great Italian poet Ludovico Ariosto stayed in 1513, as it is mentioned in the plaque. On the opposite side, at number 57 under a small balcony, there is one of the largest and most important Marian tabernacles: in a splendid 18th Century stucco frame, the “Immaculate Virgin” painted between a putto and angels’ heads, with the Divine Dove of the Holy Spirit on top. 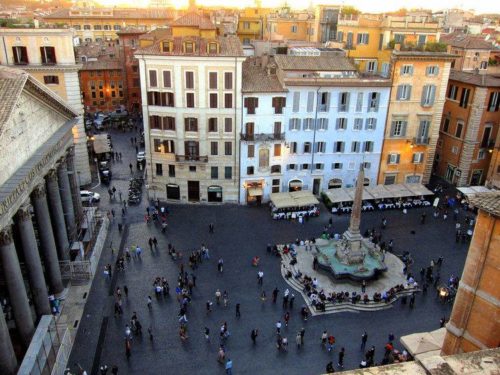 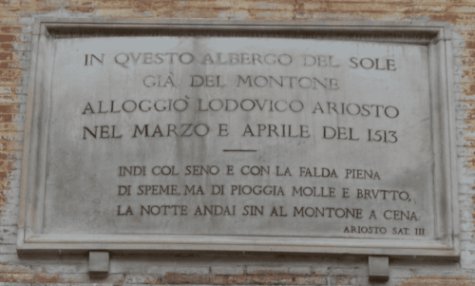 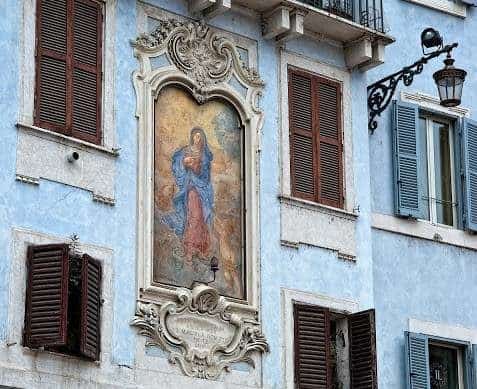 From Via della Rotonda to Via di Torre Argentina

Take Via della Rotonda and, at number 23, you will see the huge Crescenzi Palace. The Crescenzi family (whose coat of arms consists of three crescent moons with their points facing upwards) was one of the oldest and most illustrious noble families in Rome, which unfortunately became extinct in 1763. The palace dates back to the 17th Century and was built on a project by Niccolò Sebregondi: the façade (much restored) is rich in decorations, as you can see in the capitals of the columns adorned with volutes, crowns and stars. The main door is dominated by a crowned eagle, above which there is a balcony. The windows of the second floor have shelves on the sides decorated with small masks and under the lintel you can see festoons with a woman’s head in the middle. The rooms of the Crescenzi Palace were decorated at the beginning of the 17th Century by Cristoforo Roncalli known as Pomarancio with depictions of Fame, Abundance, Charity and Poetic Inspiration.

Adjacent to the Crescenzi Palace is the Melchiorri-Aldobrandini Palace, whose façade on Via della Rotonda was cut and rebuilt for road widening works, which shows a beautiful door with lion heads and a cornice decorated with lilies and rose windows.

Continue along the street, which changes its name to Via di Torre Argentina and you will come to an icon with the “Virgin and Jesus” painted in an oval frame, on the corner of Via de’ Nari. Take this street, passing on the left another aedicule with a triangular tympanum with the image of the “Madonna and Child“, and turn into Via Monterone where, at number 2, you will see the Naro Palace.

The Naro family was known in Rome since the 15th Century, and had inside it two cardinals and many men who became Knights of the Sacred Order of Malta: the Naro Palace shows on the architraved portal the family coat of arms, two decreasing crescents that you can see also under the cornice.

Opposite, near number 70, you can admire one of the most exquisite and elegant baroque aedicules in a blaze of gold rays and bas-relief clouds: a small classical temple with lintel that contains a lovely painting of the Presentation in the Temple, with the Virgin, the Child and a high priest.

At number 79 you can see the Andosilla Palace, on whose severe façade there are many architraved and framed windows, and at number 76 the 16th Century Capranica del Grillo Palace, designed by Antonio da Sangallo’s students but unfortunately totally altered by modern restorations. 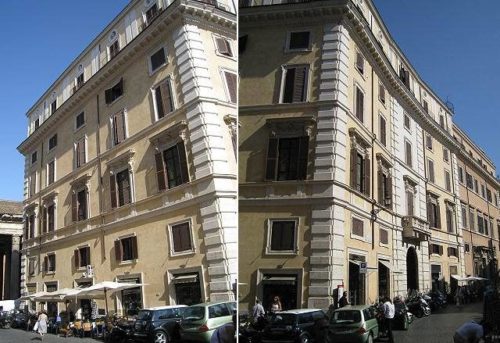 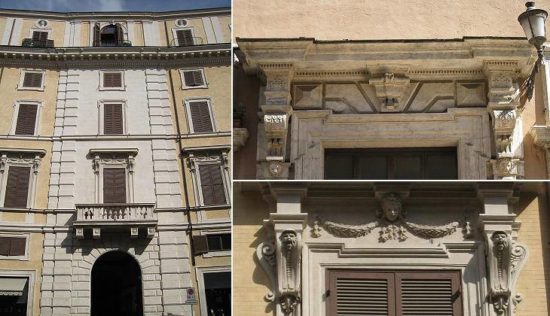 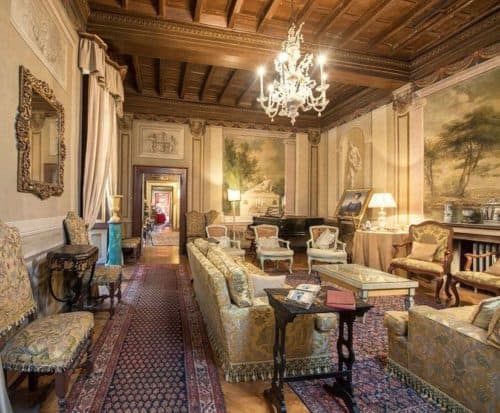 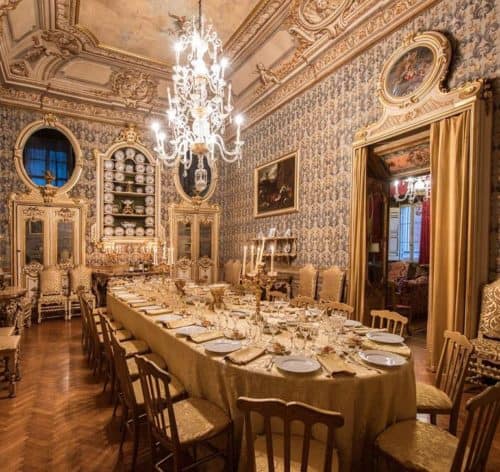 The Church of St. Mary in Monterone

THE CHURCH OF ST. MARY IN MONTERONE

To proceed with the St. Eustace District Itinerary 31, enter now (if you find it open) in the small and somewhat hidden Church of St. Mary in Monterone, whose remote origins are unknown, but certainly prior to 1186, the date of a bull of Pope Urban III in which the church is named. Restored three times (12th, 16th and 17th Century), the church was probably built on the site of a Temple dedicated to Giuturna, Roman goddess of water sources: the two perimeter walls of the church, south and west, should correspond to two walls of the Temple.

It is believed that the name of St. Mary in Monterone is derived from the Monteroni family from Siena, who lived on the road and who also gave the name to it. In the old Monteroni’s house went to live the Camporese family, a real dynasty of architects who participated in the projects of the façade of the Vicariate, the new port of Anzio, the cemetery of Verano, the Wedekind Palace and the so-called Horseshoe in Via di Ripetta.

The current façade of the church, built in 1682 during the restoration works commissioned by Pope Innocent XI, is divided into two orders, with a portal with a curvilinear tympanum and small oval windows at the bottom and a large window at the top.

The interior is divided into three naves by eight columns with different Ionic capitals, perhaps recycled from the aforementioned Temple of Giuturna. Among the works we point out the beautiful “Assumption of the Virgin Mary” by Giovanni Gagliardi (1830) and, on the high altar, the Madonna between Saints by Pompeo Batoni, a painter well known in Rome in the 18th Century. On the left wall of the presbytery, you can see the funeral monument of Cardinal Stefano Durazzo, with a winged skeleton supporting the medallion with the portrait of the deceased (1667).

THE CONVENT OF THE REDEMPTORIST FATHERS

Leaving the church, admire the Convent of the Redemptorist Fathers, an eclectic and striking corner building, in clear contrast with the simplicity of the church’s façade, built in the 18th Century by the architect Giuseppe Sardi as a typical expression of the restless spirit of the Roman Rococo: once there was a hospice for pilgrims here, built by the Monteroni family to welcome Sienese pilgrims. 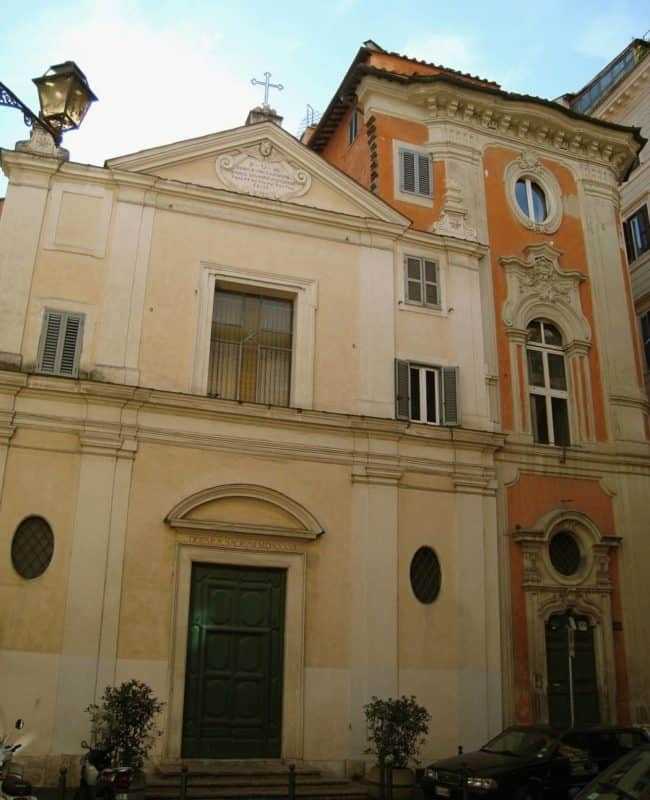 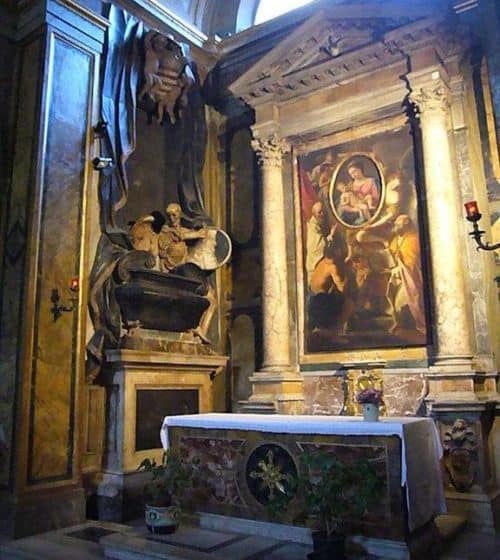 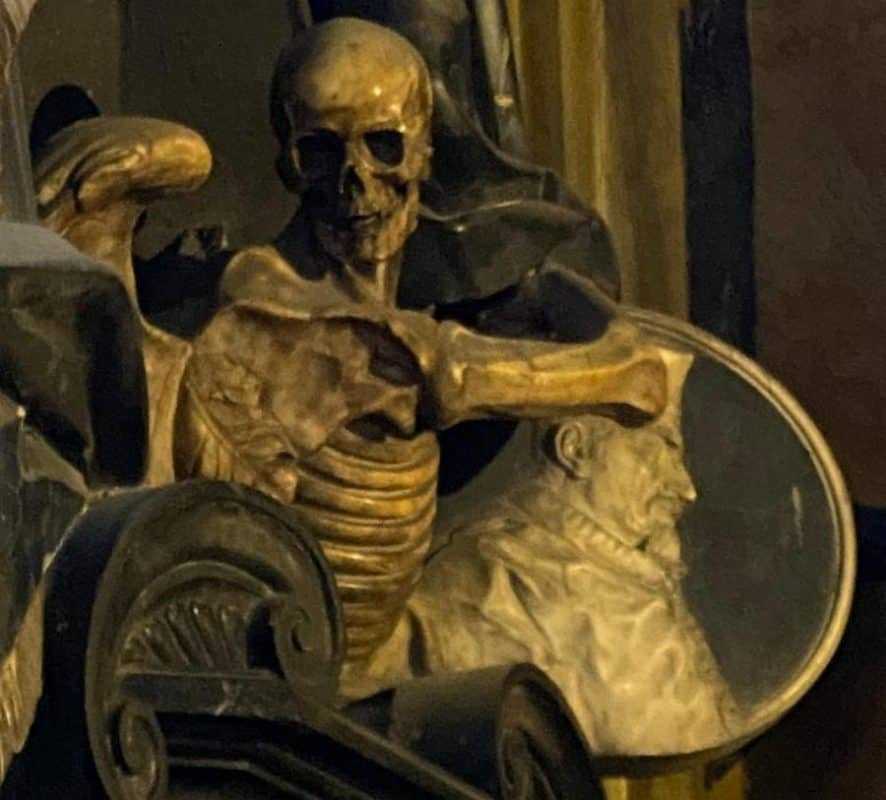 The ancient Baths of Agrippa

THE ANCIENT BATHS OF AGRIPPA

Not far from where you are now, in the area north of the Argentine Tower Square, between Corso Vittorio Emanuele II and Via di Santa Chiara, stood the oldest public baths in Rome, built by Marco Vipsanio Agrippa, faithful collaborator of Augustus and great admiral, around 25 B.C. and finished in 19 B.C., fed by the Virgin Aqueduct.

Restored twice in the I Century A.D., then again by Emperor Hadrian in the II Century A.D. and finally by Emperor Constantius in 345 A.D., they consisted of rooms irregularly arranged around a large circular room of 25 meters in diameter, probably half preserved in the shape of the Via dell’Arco della Ciambella. The Baths of Agrippa were decorated with very famous statues, such as the Apoxyomenos by Lisippo (a copy of which remains in marble inside the Vatican Museums: if you would like to admire it, please book the Vatican Museums Tour organized by Rome Guides). 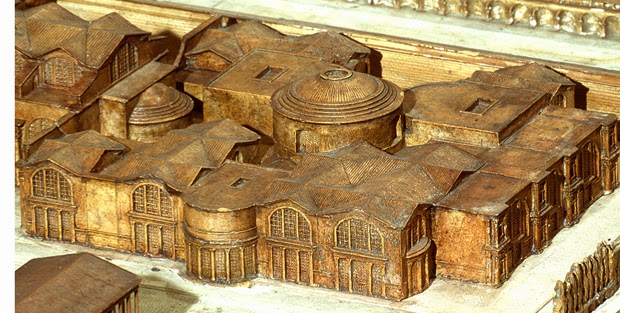 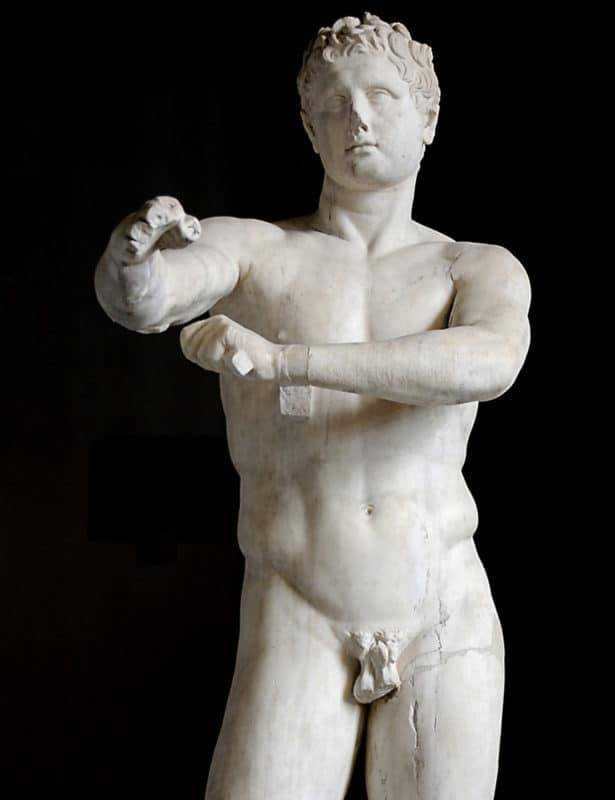 To reach the Valle Theater, final location of the St. Eustace District Itinerary 31, take Via dei Redentoristi, having on the left side the icon of the Virgin Mary and the sign of the level of the Tiber flood of December 28th 1870.

Where today is the widening of the Valle Theater, there was once the Janni Palace, demolished during the works of 1936 and rebuilt in the Massimi Square. The Valle Theater was built in 1726, entirely in wood, by the architect Tommaso Morelli on behalf of Camillo Capranica, and should remind you (for shape and structure) the theater that Pompeo Capranica built in 1678 in his palace near the Church of St. Mary in Aquiro. The theater was then rented to the Valle family, who kept it until 1753.

At the beginning of the 19th Century, the Papal Government imposed to the owners the rebuilding in masonry, in order to guarantee the safety of the spectators: the architects Giuseppe Valadier and Giuseppe Camporese were appointed for this purpose. Unfortunately, the misunderstandings between the two architects, the first of whom wanted to enlarge the theater at the expense of the palace, were insurmountable, and the work resumed under the direction of Gaspare Salvi. Other works followed over time, both in decoration and structure, until the recent consolidation in 1975.

The neoclassical façade, elaborated by Giuseppe Valadier, is divided by eight Ionic semi-columns on a high base: you can admire small loggias with balustrades, arched and rectangular windows, niches and lunettes.

Inside, the ceiling of the theater is gracefully decorated with festoons of flowers, putti and figures representing drama and comedy surrounded by flames, painted by Silvio Galimberti.

THE CURIOSITIES OF THE VALLE THEATER

The Valle Theater is famous for two curiosities.

The first is that in the theater have followed performances of comedies by Goldoni and operas by Cimarosa, Mozart, Rossini, Donizetti and Verdi. Since the 18th Century, on such occasions, female roles were always played by women, in contrast to the tradition of the time: among the actresses who performed in this theater, we can mention the famous Eleonora Duse and Sarah Bernhardt.

The second curiosity concerns the loyalty of the Capranica family to the Royal House of Savoy. Inside the Valle Theatre there was in fact a royal stage, frequented by the Savoy family, which was accessed through a reserved entrance of honor, located in the courtyard of the palace. When the Capranica family, fierce monarchists, heard that the President of the Republic Enrico De Nicola wanted to sit in the Royal Box, the order was given to wall up the entrance immediately, so that he was forced to pass through the ordinary entrance as a “common mortal”.

Adjacent to the Valle Theater, from 1585 to 1890 a small puppet theater was active, called the Little Valle Theater. Still today the Roman people remember the very funny master puppeteer Antonio Torrini, nicknamed “er Sor Manciola” because he had no left arm: this man, who died in 1885, was a true Roman, with a natural wit and a speech certainly not scanned and chastened, who during the shows often quarreled with the spectators in the audience reserving them very harsh and vulgar expressions. 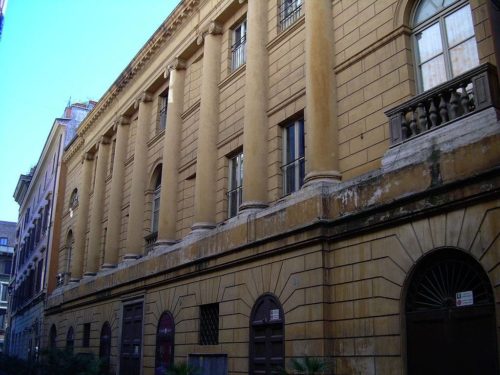 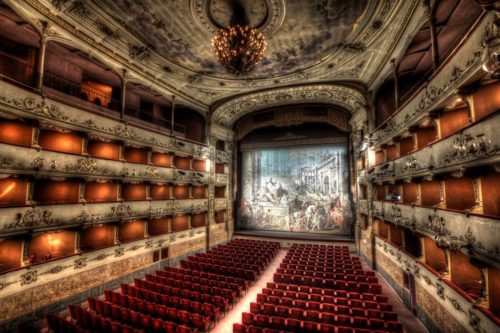 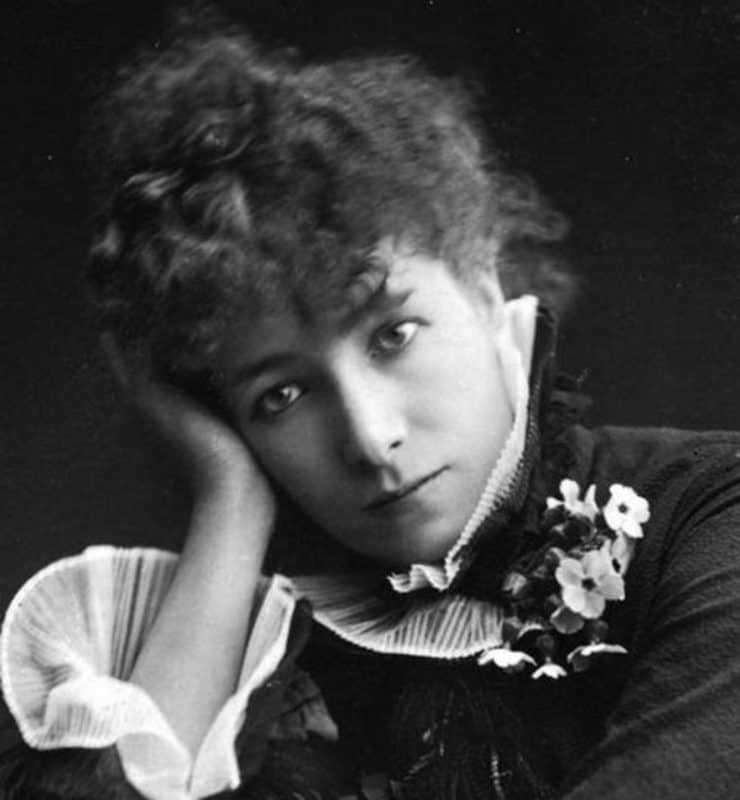