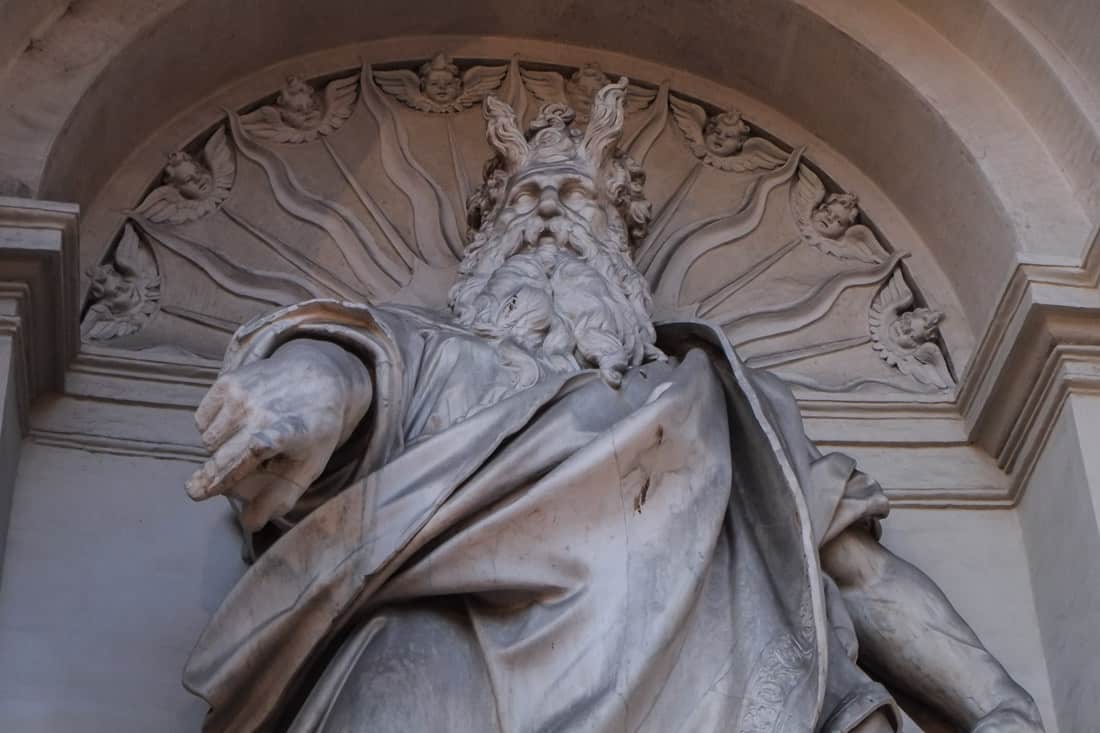 The Itinerary 10 of the Trevi District, shorter than the other ones, concerns the upper part of the district, an area between St. Bernard Square, Via Bissolati, Via di San Basilio and Barberini Square.

This area is among those that have suffered the most from the transformations that Rome has undergone in the modern times: the slopes of the Quirinal around the Barberini Palace have in fact changed radically since the last decades of the 19th Century.

An aesthetic balance that had not been disturbed either by the construction of the Barberini Palace or by those of the two major churches in the area, St. Susan and St. Nicholas from Tolentino, and which had remained almost intact until the taking of Rome, but which was radically changed by the opening of two new roads: Via Barberini and Via Bissolati.

The tour starts from St. Bernard’s Square, which was originally the end point of the Felice Water Pipelines, celebrated by a fountain that houses the statue of Moses in the center, sculpted by sculptors Leonardo Sormani and Prospero Antichi, made in the second half of the 16th Century and heavily criticized by Roman citizens for the awkward proportions of Moses.

On the left of the widening there is the valuable Church of St. Susan, whose origins are very ancient (3rd Century A.D.): the legend speaks of the existence of a basilica placed immediately outside the nearby Baths of Diocletian, called “ad duas domos” (i.e. at the two houses) because it was built on the place where there was the house of one of the first popes of Rome, Gaius, adjacent to that of his brother, the presbyter Gabinius.

The daughter of the latter, Susan, after having refused to marry the emperor’s son, was beheaded following the persecution of the Christians wanted by Diocletian. Her uncle, once he became Pope, ordered that the martyr be liturgically commemorated inside his own house, traces of which were found in the basement of the present church, to which the structures of the original three-nave basilica are superimposed.

During the Middle Ages the primitive church underwent some changes, with restoration by Popes Sergius I, Hadrian I and Leo III. In 1475, Sixtus IV entrusted it to the order of the Hermits of St. Augustine, for them then completely rebuilt at the expense of Cardinal Rusticucci, who was its owner from 1597 and completely transformed the basilica plan of the building, eliminating the two side naves, replaced by chapels.

The work, which also included the decoration of the interior, was entrusted to the architect Carlo Maderno, who also designed the facade, at the center of which opens the majestic portal surmounted by a triangular tympanum, with the statues of St. Felicita and St. Susan on either side, by Valsoldo.

On the upper order, the large central window is flanked by the statues of two other saints, Gaius and Gabinius, sculpted by Stefano Maderno and surmounted by the elegant triangular tympanum, which encloses the coat of arms of Cardinal Rusticucci.

Through the portal, dominated by a bas-relief with the Saint’s severed head, one enters the interior, reduced to a single wide nave with transept, with apse and two chapels on each side. The whole is of remarkable elegance: on the walls you can admire the frescoes by Baldassarre Croce with the main scenes of the saint’s life, painted as if they were tapestries moved by the wind.

Of great value are also the four statues placed at the sides of the nave, at the top of the side pillars, by sculptors Francesco Vacca (Ezekiel and Daniel) and Valsoldo (Isaiah and Jeremiah).

Finally, admire the painting placed on the high altar, “Death of St. Susan” by Tommaso Laureti (late 16th Century) and the frescoes in the left chapel, by the Peretti family, with scenes from the life of Saints Genesio and Eleuterio, painted by the painters Giovan Battista Pozzi and Cesare Nebbia at the end of the 16th Century.

Since 1922 the church, officiated by the Paulist fathers, belongs to the American Catholic community of Rome. 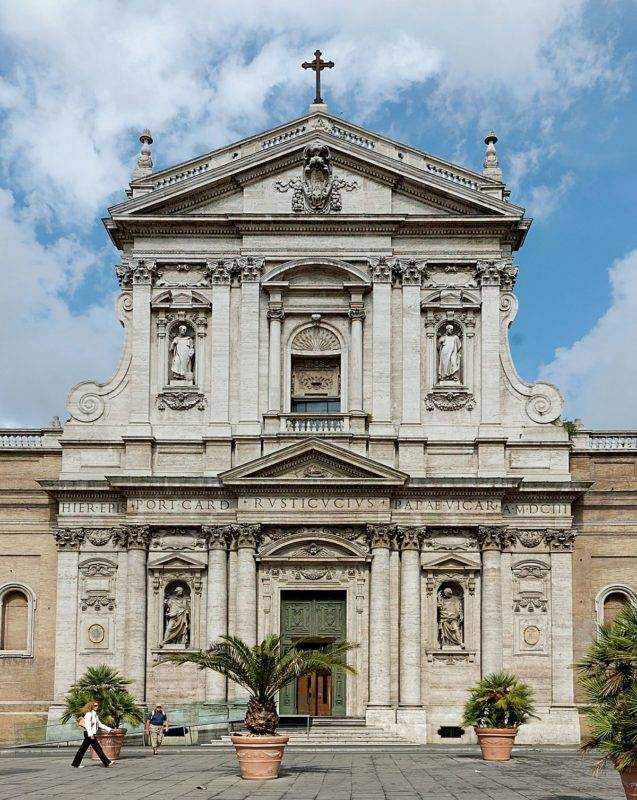 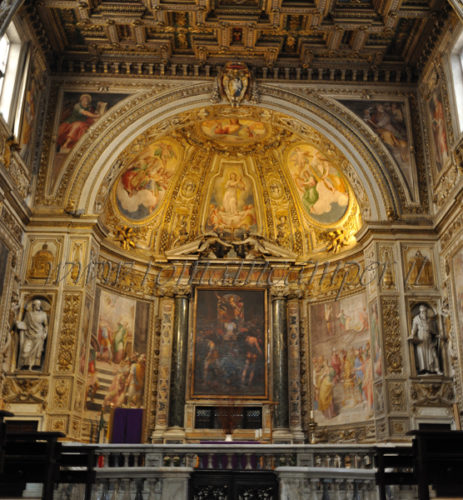 From Via XX Settembre to Via Barberini

Leaving St. Bernard’s Square, walk along Via XX Settembre, in the direction of the Quirinal Square: immediately after the church there is the garden of the Corazzieri Barracks (number 13), which occupies some areas already belonging to the convent of St. Susan.

Arrived at the entrance of the slope of St. Nicholas from Tolentino, we find ourselves in front of the Caprara Palace, with its typical 19th Century appearance, built by order of Count Odoardo Caprara in 1884, on a project by the architect Giulio Podesti.

Now take the climb of St. Nicholas, which until 1916 was nicknamed Vicolo Sterrato (“dirt alley”), and flanked the boundary wall of the lush Barberini Gardens, where, until 1872, the large umbrella of a centuries-old pine tree, called “Barberini Pine“, so well known that it was portrayed in a painting by the painter Roesler Franz.

Cross via Barberini, opened by Marcello Piacentini between 1926 and 1932, until you come to a large building on the right: the Pontifical Germanic College of Hungary.

This historical institution, whose origins date back to the 16th Century, was moved to the rooms of the former Costanzi Hotel, built between 1864 and 1970, which had hosted, among its many important clients, also Giuseppe Garibaldi.

In 1886 the seminarians, who went around dressed in red and were therefore jokingly nicknamed by the Roman people “gamberi cotti” (cooked shrimps), were housed in the hotel, demolished in 1939 and replaced by the current building, designed by the architect Giovannozzi.

Church of St. Nicholas from Tolentino

CHURCH OF ST. NICHOLAS FROM TOLENTINO

A few steps after the “house of cooked shrimps“, reach a widening on which overlooks another important church, dedicated to St. Nicholas from Tolentino.

Until the beginning of the 17th Century there was a small church dedicated to the Saint, which stood isolated between vineyards and gardens, and was used by the Augustinian fathers to host the novices of the order. In 1620 the Augustinians enlarged the church, entrusting the work to the Milanese architect Carlo Buti; however, the work proceeded very slowly, due to lack of adequate funds, until Prince Camillo Pamphilj, nephew of Pope Innocent X, decided to contribute financially to the construction of the church.

The story, however, is intertwined with a fragment of romanticism. One day Camillo’s wife, Olimpia Aldobrandini, fell very seriously ill, and the prince made a vow: he undertook to give the convent, if Olimpia was cured, he would give the convent a life-size statue of her, entirely in sterling silver. After the healing of the princess, the project was modified with papal dispensation: no longer the statue, but the construction of the church.

The Pamphilj commissioned the direction of the works to one of his trusted architects, Alessandro Algardi, but in fact they were executed by his skillful pupil, Giovanni Maria Baratta, author of the scenographic facade, with its elegant vertical thrust (1670).

Preceded by a high staircase, the facade is tripartite with Corinthian columns and is crowned by a wide curvilinear tympanum. The doves with the olive branch in their beaks, the heraldic symbol of the Pamphilj family, are placed on either side of the two niches that flank the main door, through which one enters the interior.

The interior is in the shape of a Latin cross, very sumptuous, with a single nave with three chapels on each side. The most important works are undoubtedly the fresco of the dome, painted by the painters Coli and Gherardi in 1670, which represents “The ascent to heaven of St. Nicholas“, and the sculptural group placed on the high altar, made by Baratta on a design by Algardi, which depicts the “Virgin, St. Augustine and St. Monica appearing to St. Nicholas from Tolentino“, by sculptors Ercole Ferrata and Domenico Guidi.

According to legend, St. Nicholas, seriously ill, invoked the Virgin Mary, who appeared to him together with the other two saints to offer him blessed bread: in memory of this miracle, the Augustinians distributed small blessed breads, called by the people “San Nicola’s sandwiches“, which according to tradition had the power to heal some diseases.

Some chapels of the church deserve a special mention, and in particular the second on the left, destined to the Gavotti family and considered one of the masterpieces of the Roman Baroque. The architecture of the monument is by Pietro da Cortona, who built it in 1668: the interior is decorated with polychrome marble, reliefs and some remarkable sculptures, works by sculptors Fancelli, Ferrata and Raggi. Also noteworthy are the frescoes in the dome, also by Pietro da Cortona. 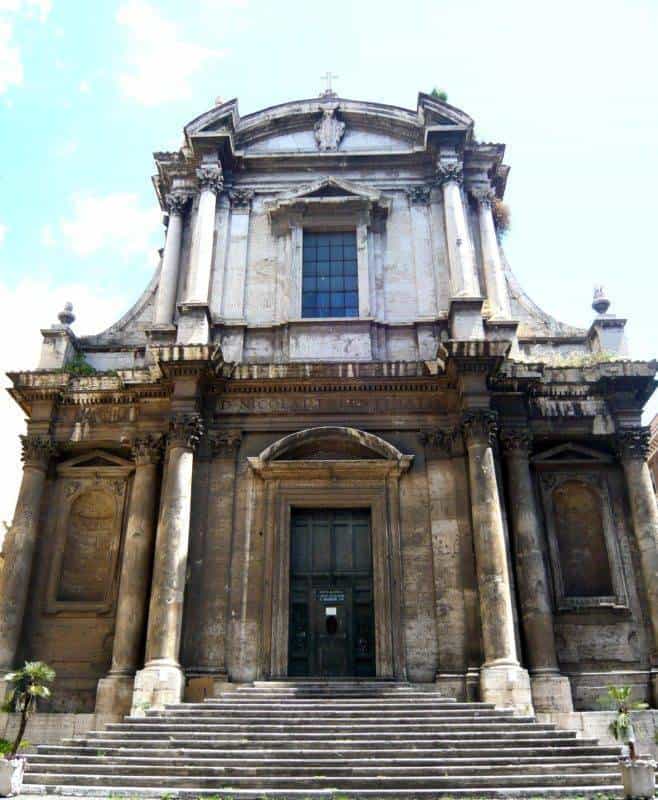 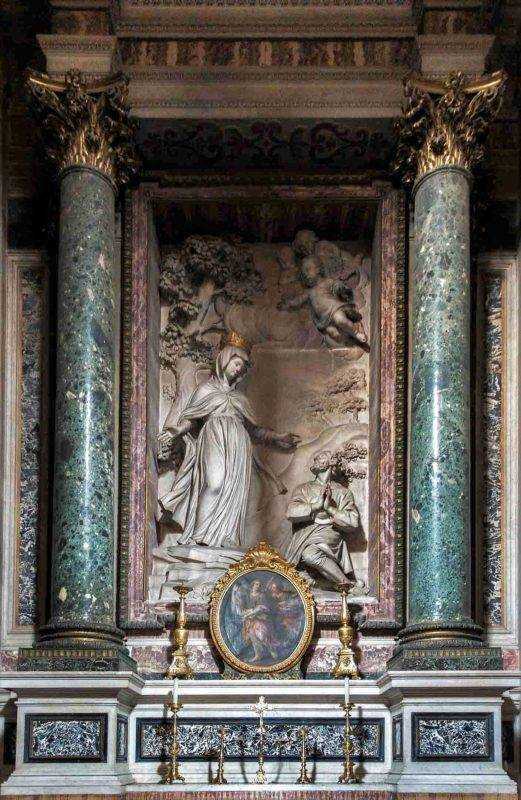 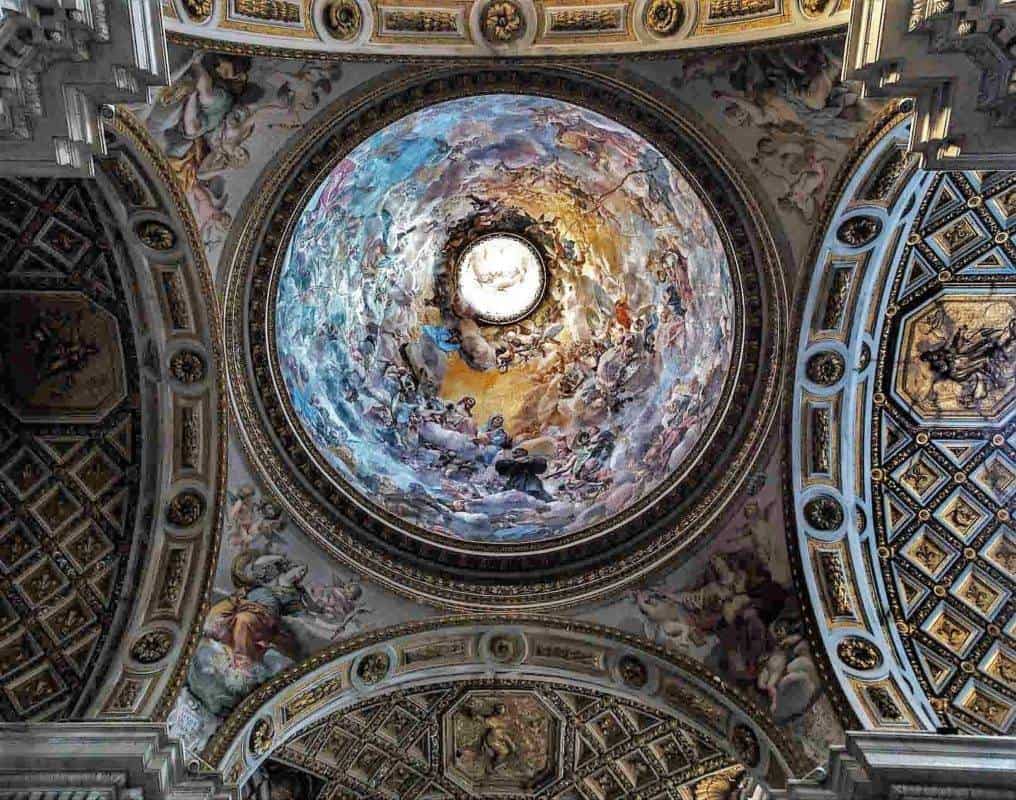