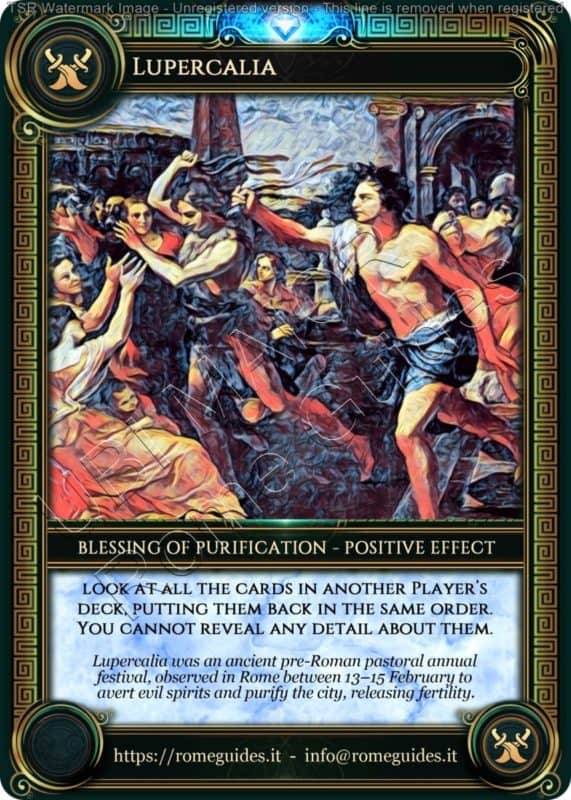 The Lupercalia was one of the most ancient and famous festivities of the Roman calendar during which the symbolic purification of the people took place. Celebrated on February 15th in honor of the Faun Luperco, god of fertility and protector of the herds, the Lupercalia was a unique event that involved the whole city in a whirlwind of excitement.

The feast was celebrated by the priests Luperci divided into two different colleges, the Quintilii and the Fabii, which tradition wanted to be founded respectively by Romulus and Remus; later, they were joined by another college of priests, the Iulii, in honor of Julius Caesar.

The Luperci met in the Lupercale, the cave at the foot of the Palatine Hill where, according to legend, the she-wolf had suckled the mythical twins: there they sacrificed some goats and a dog, passing the blade soaked in blood on their foreheads and then cleaning the knives with a woolen cloth soaked in milk, while they drank wine and laughed heartily.

After a sumptuous banquet all the Luperci, covering only their genitals with the shreds of skin obtained from the animals just sacrificed in imitation of the faun Luperco (who was always represented half naked), began a crazy ritual race through the city, running along the Holy Road that crossed the Roman Forum, hitting with their whips, also made of the skins of sacrificed animals, all the people they met on their way. This ceremony served to purify the people, especially women who voluntarily made themselves hit, convinced that those blows made them fertile and future prolific mothers.

The Lupercalia continued to be celebrated throughout the Imperial Age, although with some limitations, such as that wanted by Augustus who forbade the
participation to the boys who were too young. Not even Christianity, in its first phase, managed to undermine it: still in 495 AD, Pope Gelasius I complained about the persistence of such an abject pagan festival, tied to archaic traditions.