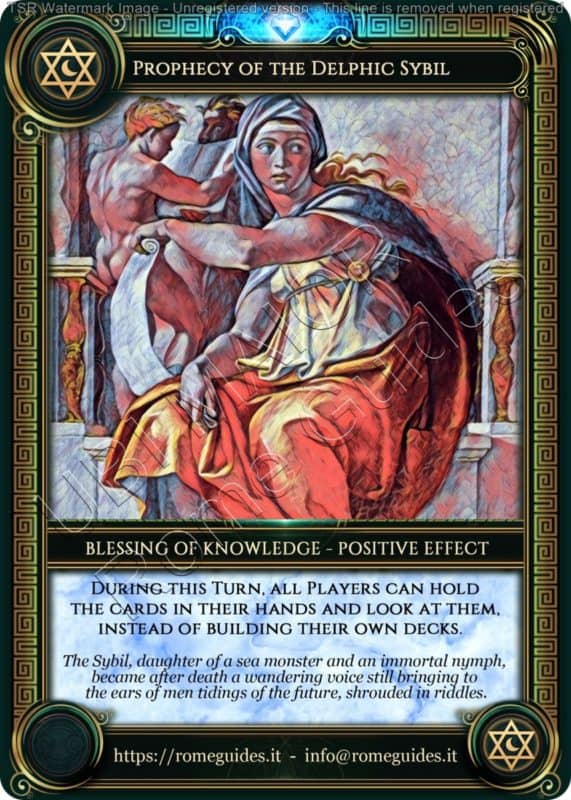 PROPHECY OF THE DELPHIC SYBIL

The Delphic Sibyl was the priestess of Apollo who, inside the Sanctuary of Delphi, emitted her vaticinis in a state of mental trance, probably induced by inhaling the hallucinogenic vapors that came out from a crack in the ground or by chewing hallucinogenic vegetables, and then revealed the prophecies in a confused form to a priest, who interpreted them for the supplicant.

The position was held by selected women in the city of Delphi, with no age limit, until 392 AD, when the practice was banned by the Roman Emperor Theodosius I, who, after he had declared Christianity to be the State religion in 380 AD, suppressed all pagan cults.

The supplicants who came to Delphi to consult the Sibyl, often after a long journey, were selected by the priests who evaluated the actual need for their request.Before the consultation was customary to sacrifice a goat, whose body would be washed with water from the source of the sanctuary: the organs of the animal, especially the liver, would have been examined by priests, in the role of haruspices, to divine the success or failure of the meeting with the Sibyl.

It was also customary to pay a generous cash offering to the sanctuary, the amount of which also conditioned the priority of admission in the presence of the Delphic Sibyl.

The suggestion of the Delphic Sibyl struck also Michelangelo Buonarroti, who included her inside the decoration of the Vault of the Sistine Chapel: on her powerful body, slightly turned to the left, stand out the eyes that look to the right with an expression of surprise, as if to represent the coming of the vision that will give origin to the prophecy.