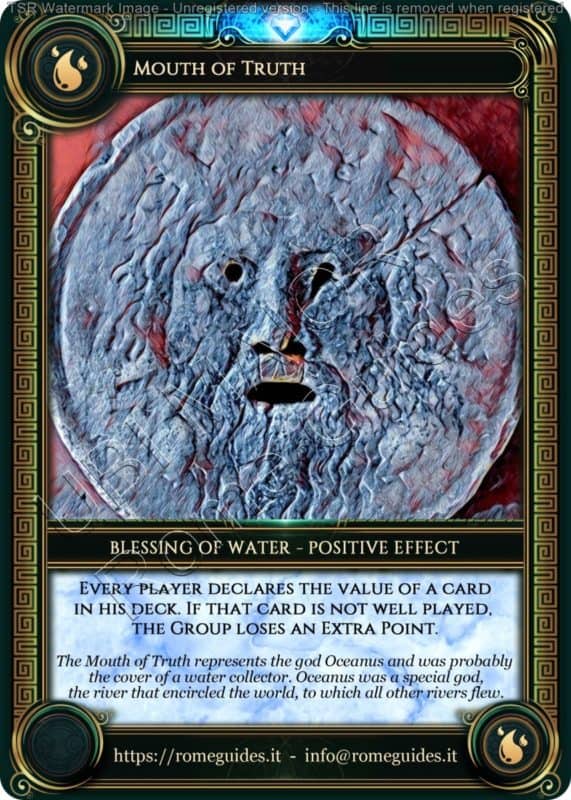 The Mouth of Truth is an ancient marble mask, walled up in the pronaos wall of the Church of St. Mary in Cosmedin since 1632. The mask depicts a bearded male face, probably the god Ocean, with pierced eyes, nose and mouth: presumably, at the time of Ancient Rome, the Mouth of Truth was a simple manhole, with the effigy of a river or sea deity who “swallowed” the rainwater.

The Mouth of Truth has always enjoyed a legendary fame: during the 11th Century, in the medieval guides for pilgrims, the Mouth of Truth was attributed the power to pronounce oracles. In the Middle Ages, there was also the legend that it was created by the magician and scholar of the 6th Century Virgil Maron, who created it for the use of husbands and wives who doubted the fidelity of their spouses: whoever, putting his hand into the Mouth of Truth, had declared the false, would have felt the Mouth close on the hand of the liar, biting it and cutting it off.

In the 15th Century, many Italian and European travelers came to Rome just for the purpose of testing the fidelity of their spouses.

The fame of the Mouth of Truth, however, dissolved at the end of the 15th Century. The story goes that an unfaithful woman was led by her suspicious husband to the Mouth of Truth to be tested, but managed to save his hand with a trick: the night before, indeed, the woman asked her lover to show up on the day she would be tested, to simulate himself as a madman and to hug and kiss her in front of everyone, even at the risk of being punched and kicked out.
The lover carried out perfectly what she requested; in this way the woman, at the moment of slipping her hand into the Mouth, could swear quietly that she had been embraced and kissed in her life only by her husband and by that man whom everyone had seen. Having told the truth, the woman was able to withdraw her hand from the tremendous Mouth of Truth unharmed, even though she was guilty of adultery: the infallible Mouth of Truth had been deceived by a simple trick!