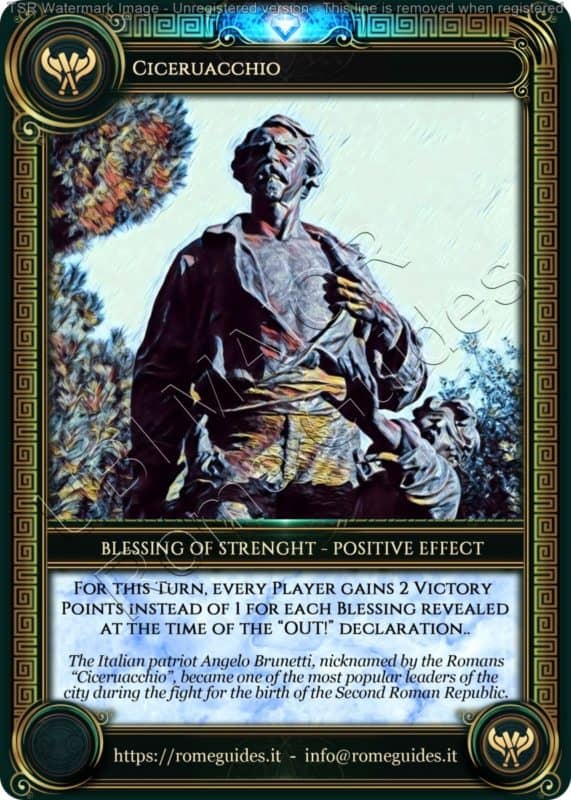 On August 10th 1849 died, shot by Austrian soldiers, the patriot Angelo Brunetti, defender of the Roman Republic of 1849. His nickname was Ciceruacchio, which according to someone derived from his eloquence (Cicero had been the most famous lawyer of Ancient Rome) and for someone else from his robust size (“ciccio” means chubby).

Ciceruacchio, who in his youth worked as an innkeeper, reaching a certain wealth, was very sociable and much loved by the Roman people: thanks to his innate dialectical ability, which he could never cultivate with education (he spoke only in Roman dialect), he soon became an informal representative of popular feelings.

Ciceruacchio became a leading figure on the Roman political scene after the election of Pope Pius IX in 1846: he was the spokesman of the hopes aroused by the new Pope, organizing events in his favor even outside Rome. He even had the words “Long Live Pius IX” embroidered on his jacket and was received several times in audience by the Pope. The enthusiasm did not last long and the hopes were followed by a progressive disillusionment.

The turning point occurred in 1848, a year of great revolutions: the Piedmontese King Charles Albert began the First War of Independence and Pius IX sent his soldiers to support the Piedmontese army against Austria, only to change his mind after a few days and withdraw the troops.

A couple of days later, the papal governor Pellegrino Rossi was assassinated with a stab wound. Although the perpetrator of the crime was never identified, the main suspect became Luigi Brunetti, Ciceruacchio’s eldest son, who fled Rome under a false name. Even Pope Pius IX, frightened, fled to Gaeta, where he launched an appeal to the Catholic powers to help him recover the lost throne, while in Rome the Roman Republic was constituted.

Ciceruacchio played a fundamental role, both through his innate oratorical ability and through his function of supply officer to the besieged city, but Rome fell. The commander of the Austrian military department ordered the immediate shooting of many patriots: Ciceruacchio asked that at least the life of his thirteen year old son Lorenzo could be spared, but he was the first to be killed, in front of his father’s eyes. Angelo Brunetti and his other son were also killed.

In 1907 was inaugurated and placed on the Janiculum Hill a monument that reconstructed the moment of the shooting of Ciceruacchio and his sons. He represented for strength, attitude and active participation in the political life of his city a milestone for the Roman Republic.