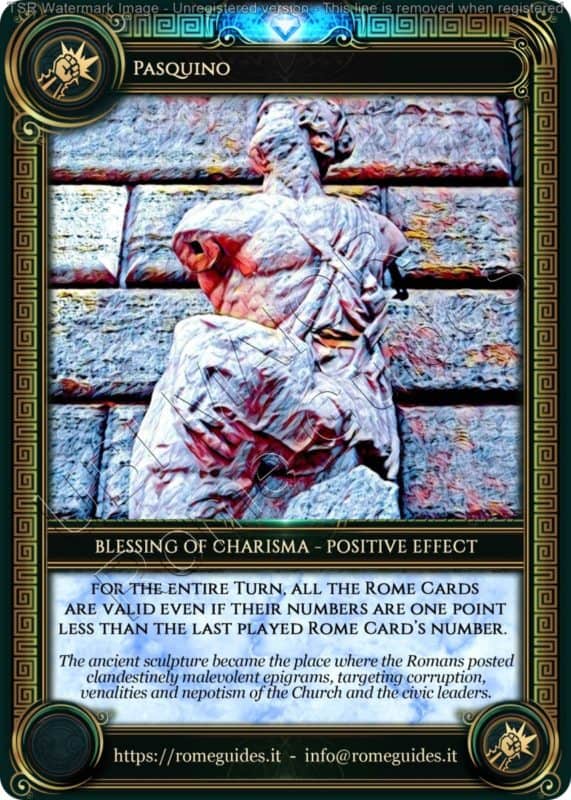 Among the most colorful legends of Rome, there are also the “talking statues“: the most famous of them is Pasquino, which became popular between the 16th and 19th centuries. The statue, which perhaps decorated the Stadium of Domitian (which stood where Navona Square is today), has a damaged face and has neither arms nor legs. It is therefore very difficult to determine which character it represents: most likely it is a hero of ancient Greece, such as Ajax or Hercules.

It was found in 1501 in the square where it is still located today, during the renovation of Palazzo Braschi. It was Cardinal Carafa, who was in charge of the renovation, who insisted that the statue be saved despite the fact that many believed it to be of little value.

According to tradition, the statue was named Pasquino thanks to an artisan of the neighborhood who was particularly good at composing satirical verses. The satire became the main feature of this statue: at night, the Roman citizens hung ironic messages around the neck of Pasquino, so that in the morning they could be seen and read by all, before being removed by the Civic Guard.

These stinging invectives were called “Pasquinate“, just from the name of the statue that expressed the discontent of the people for the corruption and abuses of the potentates. The most prominent figures, targeted by satire, soon began to detest the statue and its rhymes: many Popes began to think about eliminating the statue.

Hadrian VI tried to throw it into the Tiber, but was stopped by his cardinals who warned him against the possible retaliation of the Roman people. When Benedict XIII decided to put some guards to watch the statue at night, then the Pasquinate multiplied exponentially, so the same Pope issued an edict that provided the death penalty for those who had been caught posting them.

Over time, Pasquino became the true opponent of the excesses of the papal court and his invective faded only with the end of the temporal power of the Popes, with the breach of Porta Pia. During Fascism, on the occasion of Hitler’s visit to Rome, Pasquino made a harsh criticism against the huge expenses for the pompous scenery that had been set up for the arrival of the Nazi dictator. Even today the statue does not fail to express itself in a pungent manner, despite repeated attempts to silence him.