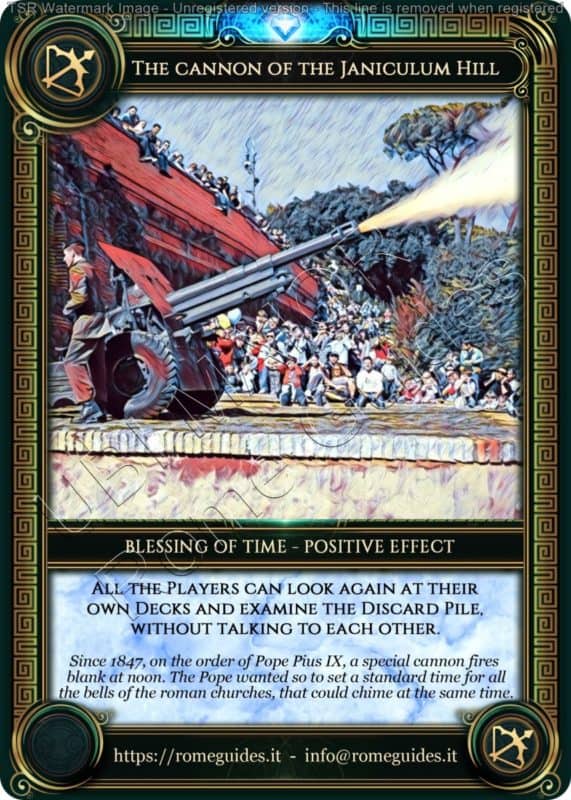 THE CANNON OF THE JANICULUM HILL

In 1847, under Pope Pius IX, Rome had a problem with the synchronization of the bells. Too often, indeed, it happened that the counting of the time of each single bell was done by the sacristans of the various churches of Rome, with the result of hearing uncoordinated and misaligned sounds.

Thus, in order to avoid too much discretionality and an excessive discrepancy between the various churches in Rome, the Pontiff decided to have a blank shot fired at noon to synchronize all the bells in the Capital of the Papal State.

Originally, the cannon was located in the St. Angel’s Castle, where the artilleryman received a traditional “homemade” signal from the Roman College to fire the shot: the descent of a large wicker ball and a hoisted flag on the ceiling of the building.

The cannon arrived at the Janiculum Hill only in 1904, after a brief passage of one year at Monte Mario. In 1925, to indicate noon and trigger the shot, the telegraph finally arrived, being a more precise and technological method.

During the Second World War, the blast was replaced, for reasons of public order, by the sound of a siren, only to become active again in 1959 after an appeal by the famous Italian radio and television presenter Mario Riva.