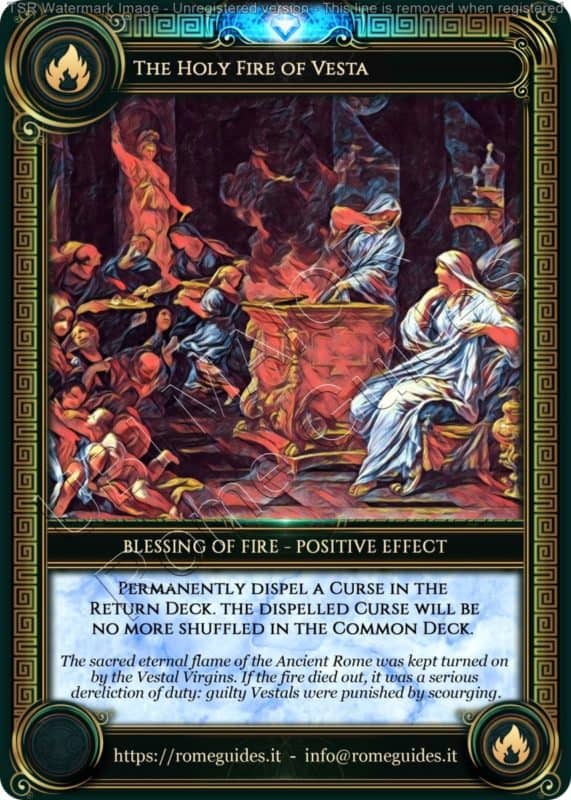 THE HOLY FIRE OF VESTA

In the Ancient Rome, to the fire was reserved a devotion of particular importance associated to Vesta, goddess of the fireplace. Vesta was the elder sister of Zeus; courted by Poseidon and Apollo, the goddess had the privilege of maintain her virginity forever, obtaining great honors and worship in all men’s homes and temples.

A fire burned day and night in the Roman Forum, inside the Temple of Vesta: the fire was kept alive by the Vestal Virgins, subject to Virgo Vestalis Maxima, who symbolically represented the entire community and formed with the Pontifex Maximus the most important sacerdotal couple of Rome.

The Vestal Virgins were chosen by the Pontiff according to certain characteristics: between 6 and 10 years old, in good health and belonging to patrician families with both parents still alive. Their “service” lasted thirty years and was divided into three stages of ten years: the first ten years they had to learn the “trade”, the second ten were in charge of worship and the last ten instructed the novices. After thirty years they were free to return to society and marry, although they were no longer very young.

Each Vestal had to keep her virginity for the period of service. Physical purity had to coincide with the purity of the heart. It is not a coincidence that they could testify without oath and enjoyed wide privileges: they were reserved places of honor in public places, were maintained at the expense of the state and could write their last will, as well as asking for mercy for a condemned man who they had met accidentally in their path.

Among their duties there was the preparation of ingredients for any public or private sacrifice and, mainly, the custody of the sacred fire that burned at all times, every day and every night of the year. The fire was never to be extinguished because it was a symbol of the eternity of Rome, under penalty of flogging the Vestal responsible for the surveillance shift.

The sacred fire in the temple of Vesta was officially “extinguished” in 391 AD by order of Emperor Theodosius who, following the Edict of Thessalonica (380 AD) and the recognition of Christianity as the only official religion, prohibited pagan public worship and regulated the closure of all pagan temples and their priestly colleges, male and female.