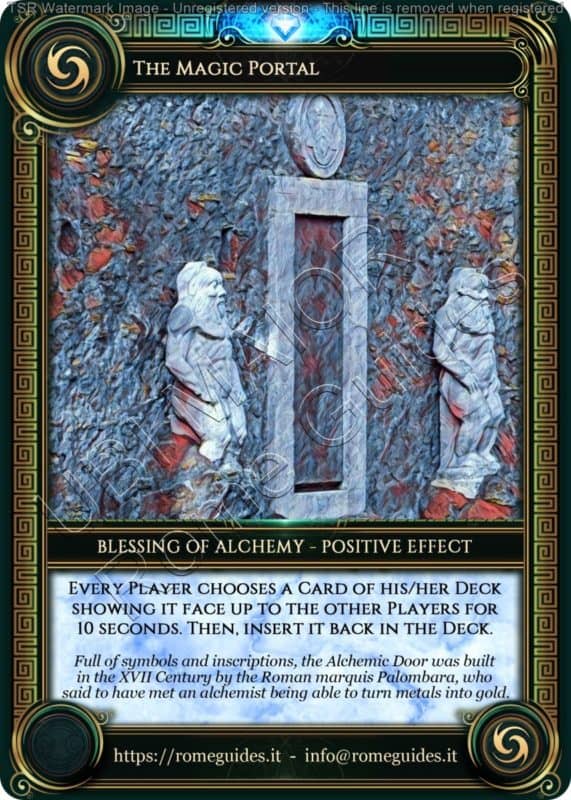 In Vittorio Square, not far from Termini Station and the Basilica of St. Mary Major, it is possible to notice a curious assemblage of statues and esoteric symbols. The Magic Portal, also known as the Alchemical Door, was built between 1655 and 1680 by the Marquis Palombara in his residence, Villa Palombara. In 1873 the Magic Portal was dismantled and rebuilt in 1888 in the gardens of Vittorio Square, adding next to it two statues of the egyptian god Bes, which were in the gardens of the Quirinal Palace.

The Magic Portal was accompanied by alchemical and esoteric symbols engraved in marble, related to the great alchemical passion of the Marquis Palombara. According to legend, the alchemist Francesco Giuseppe Borri, who had just been released from the prisons of Castel Sant’Angelo following accusations of heresy and poisoning, was hosted by the Marquis Palombara in his villa for several years.

Legend has it that Borri spent a night in the gardens of the villa in search of a mysterious herb capable of producing gold.

The next morning he was seen disappearing forever through the door, leaving behind some golden straws, the result of successful alchemical transmutation, and a mysterious paper full of enigmas and magical symbols that should contain the secret of the philosopher’s stone.

The symbols engraved on the Magic Portal were actually classic illustrations of the books of alchemy and esoteric philosophy of the second half of the 17th Century, of which the library of Marquis Palombara was particularly rich: they followed, with some slight differences, the sequence of the planets associated to the corresponding metals, in full alchemical spirit.