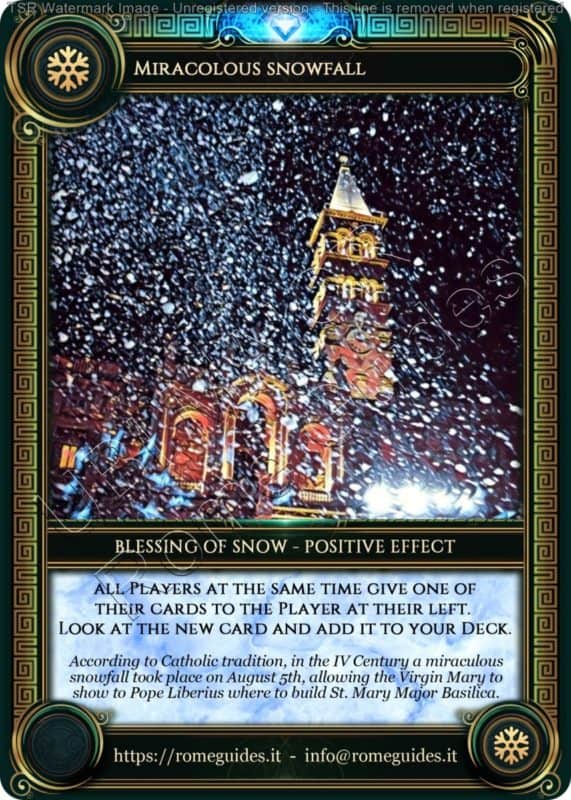 The Basilica of St. Mary Major is one of the four Major Basilicas of Rome and is considered the mother of all Marian churches in the world, competing with the other Roman church of St. Mary in Trastevere.

The foundation of the church of St. Mary Major is connected to a famous legend.
In the 4th Century AD, under the pontificate of Pope Liberius, a noble and wealthy Roman patrician named John and his noble wife, having no children, decided to offer their goods to the Virgin Mary for the construction of a church dedicated to her.

The Madonna appreciated their wish and appeared in a dream to the couple the night between August 4th and 5th, indicating with a miracle the place where the church would have been built.The following morning the Roman couple went to the pope to tell him about their dream: since the Pope had also had the same dream, they went to the indicated place, the Esquiline Hill, which was found covered with snow in the middle of summer.

At that point, the Pontiff traced the perimeter of the new church following the surface of the snowy ground and had the sacred building built at the expense of the noble couple.

Since then, the Romans remember that event as “the miracle of the snow“. Every August 5th, in the Basilica of St. Mary Major, the miracle is commemorated with a rain of white rose petals, falling from inside the dome during a solemn liturgical celebration. Externally of the Basilica, in the square, a sound and light show accompanied by classical music is usually organized.