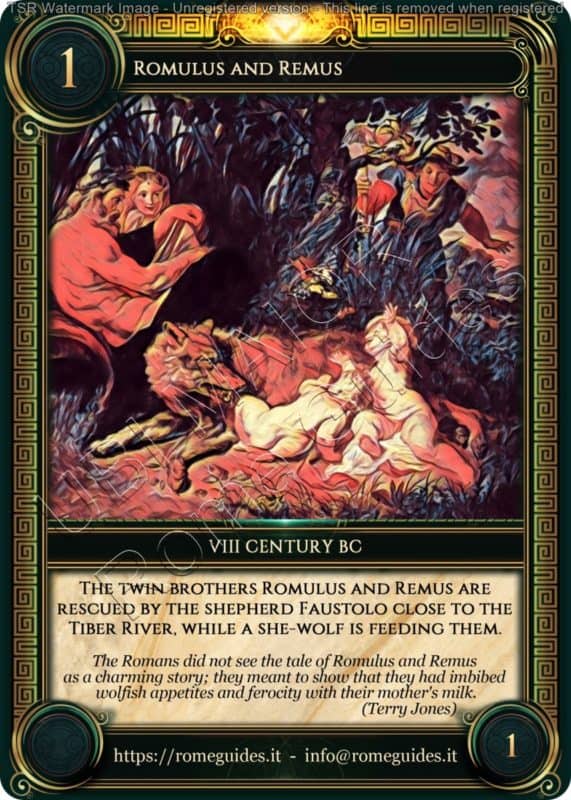 Based on the narrations of Titus Livius, Virgil and Dionysius of Halicarnassus, the history of Rome would begin with the arrival in Italy of Aeneas who, after escaping the destruction of Troy (XIII Century B.C.) together with some companions, would have landed on the coast of Lazio at the end of a long journey: here Aeneas founded the city of Lavinium. Latino, the king of the tribes already settled in the area of the landing, made an alliance with Aeneas, strengthened by the marriage between the Trojan hero and the king’s daughter, Lavinia.

This event unleashed the wrath of Turno, king of Rutuli and promised spouse of Lavinia, who, allied with the Etruscan Mezenzio, declared war against Latino and Aeneas. The violent clash ended with the victory of the Trojans and the deaths of Turno and Latino: Aeneas then took the command of the two populations, which from that moment would be commonly called Latin. A few years later, after the death of Aeneas, the throne passed into the hands of his son Ascanius, who founded the city of Alba Longa, where his descendants reigned for sixteen generations.

At the seventeenth generation the throne passed into the hands of Numitore. His younger brother Amulius, wishing to seize the throne, conspired against the king, killing his son and forcing his daughter Rea Silvia to become a vestal virgin, thus preventing a legitimate succession. Shortly after, however, Rea Silvia became pregnant: the legend says that this was due to the god Mars. Amulio, fearing that this fact could interfere with his plans, locked up Rea Silvia and, after she gave birth to a pair of twins, Romulus and Remus, ordered his guards to take the children to a bend in the Tiber river and there to abandon them to their fate.

The twins, however, survived thanks to the intervention of a she-wolf, who, hearing the wails of newborns, nursed them. Romulus and Remus were then rescued by a local shepherd, Faustulus, who raised them together with his partner Acca Larentia. Romulus and Remus, once they reached adulthood and discovered their true identity, helped their grandfather Numitor to return to the throne by killing Amulius.