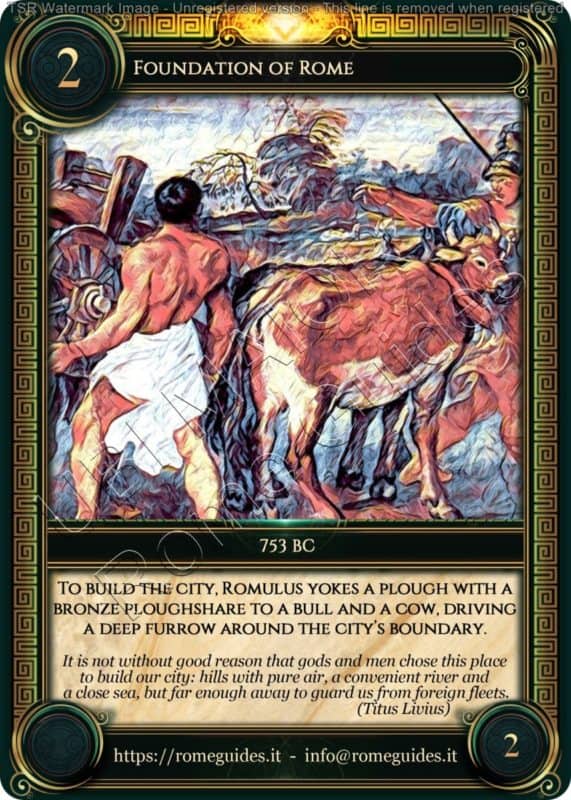 Once the right order of things was restored, Romulus and Remus manifested to their grandfather their desire to found a new city in the places where they had spent their childhood. In order to establish who would be in charge of the government of the new center, the two relied on the divine will, manifested through the flight of birds (according to the ancient practice of “auspices”).

Placed on the Aventine Hill, Remus would have first sighted six vultures, while Romulus, attested on the Palatine, would have seen twelve. At this point, a fierce dispute arose between the two brothers on the correct interpretation to give to the divine signs: according to Remus, it was the “moment” of the vision that should prevail, while according to Romulus, greater value should be given to the number of birds sighted.

At the end, the dispute degenerated into an armed clash, in which Remus found death, probably by the hand of Romulus himself. Acclaimed king by all present, Romulus officiated at that point the rites necessary to “formalize” the foundation of the city.

April 21th 753 BC, Palatine Hill.
Romulus came out of the hut in which he lived at dawn.
After having offered a sacrifice to the gods, he performed the rites necessary to gain divine benevolence.
Brandishing a ritual stick called lituus, he symbolically traced in the sky the limits of a quadrangular area. Then, he brought the drawn area on the ground so that it coincided with the four corners of the Palatine.
Then, he marked the limits of the area by placing in the ground terminal stones, that were going to draw a perimeter that is the so-called “pomerium“.
At that point, Romulus hitched a bull and a cow to a plow and drew a furrow all around the Palatine, just downstream of the pomerium.
The furrow was marked with other terminal stones, that were incorporated into the construction of the Romulean Walls, placed above the furrow. This will make the walls inviolable and sacralized.
The so-called “Square Rome” was born. The rites ended with the sacrifice of the bull and the cow, addressing a prayer to Jupiter, Mars and Vesta. These are the deities to whom the three doors of the Romulean Walls were probably dedicated.