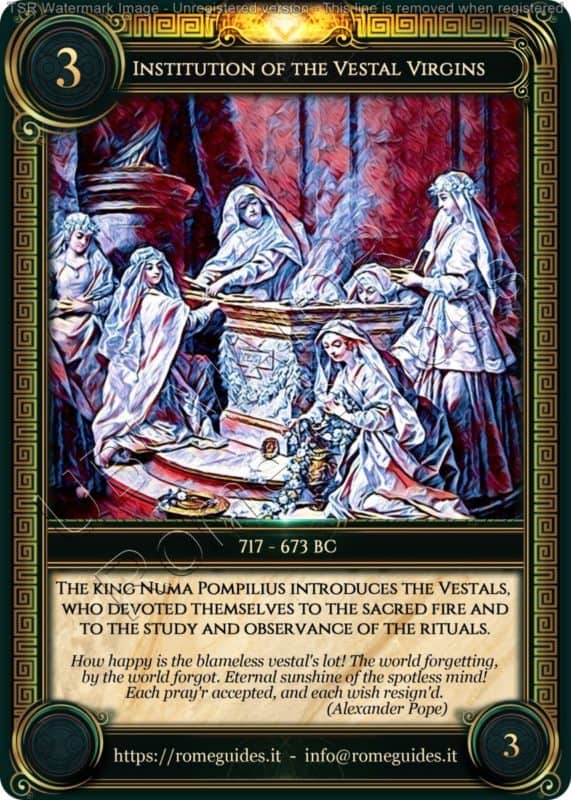 INSTITUTION OF THE VESTAL VIRGINS

To the second king of Rome, Numa Pompilius, is attributed the creation of the cult of the Holy Fire, with the establishment of an exclusively female priesthood consecrated to Vesta, the goddess of the fireplace.

The vestal priestesses, and in particular the Vestalis Maxima, were the “matrons of State” par excellence. Their career began between the age of six and ten years, when the girls were enlisted by Pontifex Maximus, who selected them among the elite Roman families: they had to be free, patrician (in the first centuries), without physical imperfections and with both parents still alive. The vestal virgins remained in office for thirty years, and during this long period they had the obligation to be virgin.

The role of the vestal priestesses was not only religious, but also political. The holy fire of the city was housed in the Temple of Vesta, where the priestesses of the goddess were in charge of guarding it, preventing it from extinguishing even for a single minute, except for the ritual extinction, which occurred on March 1st, the first day of the year in the ancient Roman Calendar.

In the Temple of Vesta, the vestal virgins had also to keep some secret and precious talismans, including the Penates of Rome and the Palladium, the statue of Pallas Athena that Aeneas, escaped from Troy, had brought with him in Italy and that guaranteed the protection of the gods.
Finally, the vestals had to make the “mola salsa“, a preparation of spelt and salt used three times a year during the official festivals, with which the animals were sprinkled during the holy sacrifices (hence the word “immolate“).

In case a vestal virgin did not behave according to the rules and customs of Ancient Rome, the punishment would have been very severe. If a vestal allowed the holy fire of Rome to be extinguished, failing in her duty of care, the punishment was the whipping, which was inflicted in a secluded place and on the body covered, in respect of her virginal purity.
Even more serious was the violation of the obligation of chastity. The sexual relationship between a vestal and a man was defined “incestum“, and was punished by burying alive the vestal priestess in the so-called Campus Sceleratus, located near Porta Collina (not far from the current Termini Central Station). The lover of the vestal, however, was stripped naked and flogged to death in the Roman Forum.

When the thirty-year office of the vestal virgin ended (ten years as an apprentice, ten as a keeper of the fire and ten as a trainer of young people), despite having a very advanced age for the times, the ex priestess could marry.