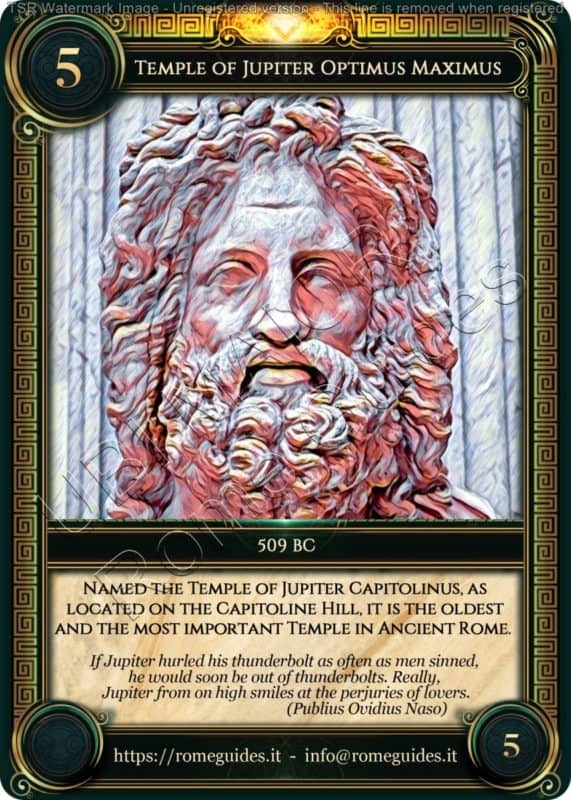 The Temple of Jupiter Optimus maximus was the most important of the temples in Rome: it was dedicated to the so-called “Capitoline Triad”, composed by Jupiter, Juno and Minerva, probably the three most important deities of the Roman religion.

According to tradition, the temple was built as a counterpart to the one dedicated to Iuppiter Latiaris, on today’s Mount Albano; the Temple, nicknamed of Jupiter Capitolinus as it was built at the top of the Capitoline Hill, was started by the king Tarquinius Priscus around 575 BC, with the construction of a huge embankment surrounded by a wall, but it was completed by the seventh and last king of Rome, Tarquinius the Superbus, with the intervention of excellent Etruscan artists and artisans (including the sculptor Vulca, from Veio, who according to the narration of the historian Pliny created the statue of Jupiter).

Although it was built during the Age of Kings, the Temple was inaugurated in 509 B.C. by Horatius Pulvillus, one of the two Consuls of the first year of the Republic of Rome.

Inside the temple were kept, in a marble case, the Sibylline Books, consulted by the Romans to understand the will of the gods in front of controversial episodes or in anticipation of wars or major events.
In front of the Temple ended the triumphal processions, while at the beginning of each year the new Consuls, who began their office, made solemn sacrifices as a sign of good luck.

The Temple of Jupiter Optimus Maximus underwent several restorations and improvements over the centuries, including the work carried out in 296 BC by the Ogulnii brothers, who replaced the fictile quadriga of Jupiter at the top of the pediment with a bronze one, created with the income from the fines imposed on usurers.
Unfortunately, the Temple was very often damaged by atmospheric conditions (especially by lightning) and was completely destroyed in 83 BC and rebuilt on the initiative of Sulla in an identical manner to the previous, except for the new statue of Jupiter, which was made of marble taking inspiration from the Zeus of Olympia. Destroyed again by a fire in 80 A.D., it was rebuilt by Emperors Titus and Domitian with great use of marble and gilded bronze.
Because of the spoliation that took place in the Middle Ages, there is almost nothing left of it, if not a part of the foundation visible within the path of the Capitoline Museums.