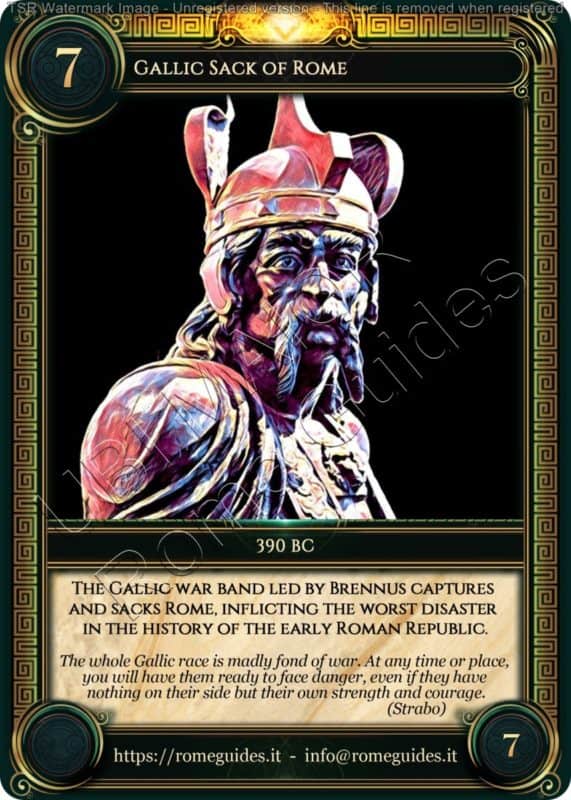 While Rome, in the middle of the Republican Age, was trying to keep under control its political and social problems, a terrible and unexpected episode occurred: in 390 BC about forty thousand Gauls warriors, led by Brennus, approached threatening the central Italy.

The Romans were immediately aware of the serious danger and sent quickly an army to face the foreigners: this army was, however, exterminated by the Gauls on the banks of the Allia river, a tributary of the Tiber. The defeat was so severe that the date of July 18th (the Dies Alliensis) was since then considered as an unlucky day (Nefas) in the Roman calendar.

At that point the terror spread in Rome: the population abandoned the city, with many who fled to the south for the fear of being massacred, while according to tradition remained in the city only the elderly senators, who did not want to leave their homes, and a group of brave soldiers survivors who entrenched themselves on the Capitoline Hill.

The Gauls looted and burned the deserted city and then, after they had killed all the senators, began to besiege the Capitol. The geese, which were holy to Juno, squawked as soon as the Gauls invaded the Capitoline Hill, and allowed the Romans to organize an extreme (but useless) defense.
According to tradition, the Gauls pretended that the Romans would pay a thousand pounds of gold in order to leave the city: the Romans realized almost immediately that the Gauls weighed the gold with rigged scales and protested, but according to legend Brennus threw his heavy iron sword on the scales, shouting “Vae Victis!” (Woe to the conquered!).

The patriotic legends created after this event narrate a final part of the story that never really happened. The Gauls remained for months undisturbed masters of the city, even after the hasty escape of the Romans, and left when they had nothing more to steal. The Roman historians, however, wrote that at the time of the delivery of gold, the brave Roman general Marcus Furius Camillus came to Rome, throwing himself against the Gauls holding the sword and shouting “Rome will be redeemed with iron and not with gold!“, freeing the city from the invaders.