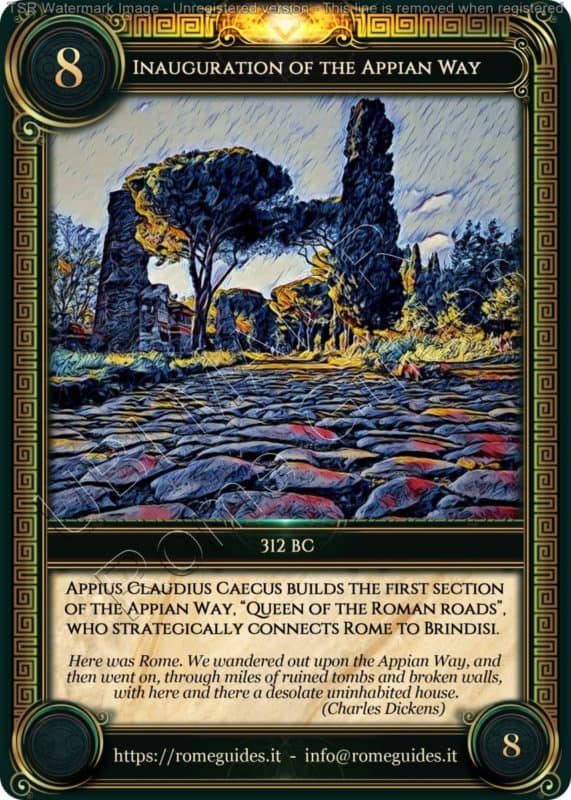 INAUGURATION OF THE APPIAN WAY

The Appian Way was the first of the great Roman roads to take its name not from the function or the place to which it was directed, but from the magistrate who had built it.

In 312 BC, indeed, the censor Appius Claudius Caecus arranged for the construction of a new road axis linking Rome to Capua, in order to allow the fast movement of Roman troops to the south during the Second Samnite War (326-304 BC). Later, the route was extended to the port of Brindisi, thus providing Rome with a direct connection with Greece, the Middle East and Egypt, essential for military expeditions, travel and trade. This intervention elevated the Appian Way to the most important road in the Roman world, so as to be nicknamed by the poet Stazio in the I Century AD as “regina viarum” (the “queen of roads”).

The Via Appia began at the Capena Gate, near the Circus Maximus, and continued to its destination according to a linear and easy route: the path was interrupted only near Terracina, where it was necessary to cross a navigable waterway that flanked the road.

The route of the Appian Way had some specific features that later became essential for the entire Roman road network: the road was about 4.10 meters wide, a size that allowed easy movement in both directions, and was flanked by sidewalks surrounded by numerous funerary monuments, which passers-by could admire in the boredom of the monotony of the journey.

The surrounding countryside was characterized by small farming villages, which at the beginning of the Roman Empire began to disappear to be replaced by large villas of wealthy Romans eager to rest in luxurious homes away from the chaos of the city. Post stations, inns, hotels, small thermal baths and services for travelers marked the route, well organized and managed by Curatores in charge of ensuring the continuity of connections between Rome and the provinces.

During the Roman history, the Appian Way was the protagonist of many historical events, among which stands out the epilogue of the revolt of Spartacus, in which 6000 rebels were captured and crucified along the Appian Way from Rome to Pompeii.