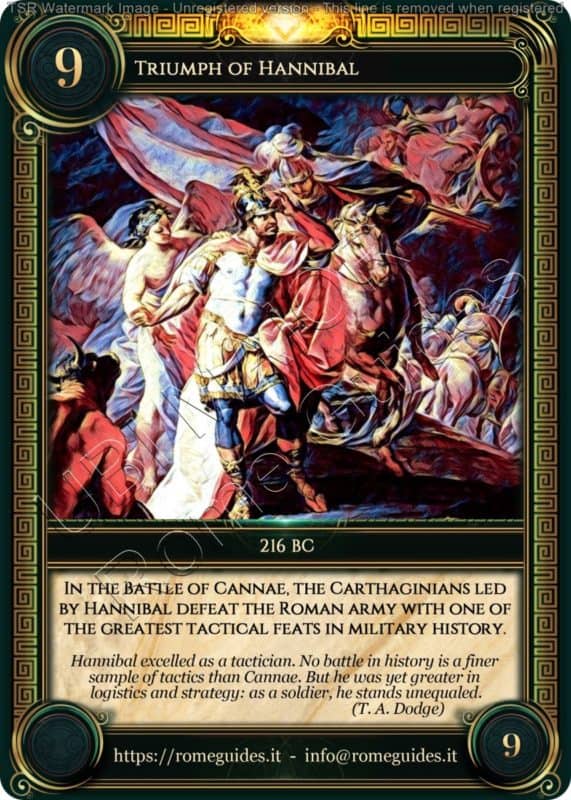 Rome, emerged victorious from the First Punic War, had established itself as the true ruler of the Mediterranean Sea with the collapse of Carthaginian hegemony. The redemption for Carthage, however, did not delay to arrive: violating the treaty according to which its conquests could not extend beyond the Ebro river, the Carthaginian army commanded by Hannibal first put under siege the city of Sagunto and then, with a reckless move, crossed the Alps at the head of 40,000 men.

Although there were many victims due to a very harsh climate, the defeats of the Romans near the Ticino and Trebbia make rush among the ranks of the army of Hannibal the Gallic tribes submitted by the Romans and eager to fight against the common enemy.

After a third defeat on the Lake Trasimeno, Rome reacted to the defeat by nominating the dictator Quinctus Fabius Maximus: he decided not to face the enemy in the open field, preferring to adopt a series of delaying tactics aimed at troubling Hannibal in his supply operations and movements.

The Roman Senate, not considering such military tactics honorable, replaced the dictator with the two consuls Lucius Paulus Aemilius and Gaius Terentius Varro, entrusting them with a colossal army of 70,000 men. It was a bad choice.

The final battle took place near Cannae, a small village in Apulia near the Ofanto river. The deployment of the Roman army was the typical one of the Republican Age, with a solid center of heavy infantry veiled by a screen of light infantry and with the cavalry on the wings: in the mind of the two consuls, this deployment had to be a real steamroller, and the battle would have been a simple formality.
Hannibal, however, perfectly understood the situation and developed a masterpiece of military art. The center of the Carthaginian army was occupied by the light infantry, much faster than the Roman one. Behind them, Hannibal placed the Celts and Iberians in mixed formation, while at the end he positioned the African veterans and the two wings of cavalry, on the one hand the Celtic horsemen and on the other the Numidian cavalry, trained to storm the enemy with javelins without ever coming into contact.

It was a massacre. The Roman army, overwhelmed by the powerful Carthaginian cavalry, immediately broke. The legendary cohesion of the Roman legions was shattered in a few hours, also because of the different styles of combat that the legionaries had to face: the Iberians hit with their pointed swords, the Gauls attacked with powerful blows, the Numidian knights bombarded with a rain of javelins.
At the end of the clash, the Roman losses exceeded 50,000 units against about 6,000 suffered by the Carthaginians.