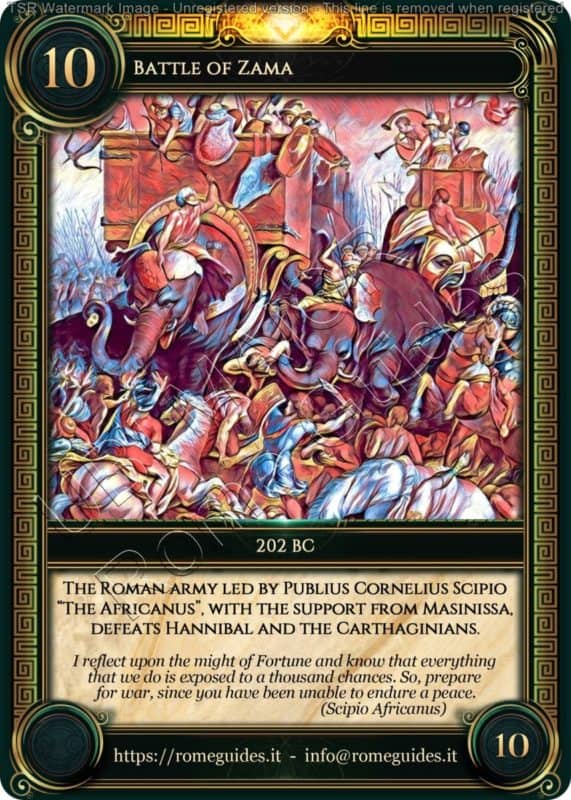 It was already fourteen years that Rome and Carthage were in war when, in 204 BC, the Roman consul Publius Cornelius Scipio asked the Senate to authorize a risky maneuver: attack directly Carthage to end the conflict. The idea was dangerous, since it was necessary to move the majority of the army in Africa, leaving Rome almost unprotected: the concept was based on the assumption that Hannibal, seeing his city on the verge of being attacked, would have folded to protect it.

At first, the Senate did not support the proposal, but still allowed Scipio to recruit volunteers and mercenaries to launch a campaign in Africa. Scipio achieved his greatest success by recruiting the prince of Numidia Massinissa, promising to help him in the conquest of the African throne. The intuition of Scipio proved to be correct: considering the victories of the Romans on African soil, Hannibal returned home. On October 19th 202 BC, the two great generals were finally face to face in Zama, near Carthage (near the modern Tunis) ready to fight the battle that would have decided once and for all the fate of the war.

The reinforcements that Scipio was able to obtain were not enough to balance the forces: the numbers of the Carthaginians were much greater, and moreover they had 80 war elephants, which Hannibal hoped to use to crush the Roman infantry.
During the war, however, the Romans had already learned what was the weakness of those huge war beasts: if they panicked, they became a danger to the army for which they were fighting. For this reason, as soon as the clash began, the Romans played the trumpets to scare the elephants that, just as Scipio had predicted, spread chaos among the Carthaginian cavalry.

The Roman cavalry took advantage of the chaos caused by the elephants to attack the flanks of the enemy, whose riders retreated leaving the infantry without protection. The attacks on the rearguard of the Carthaginian formation determined the outcome of the battle. The numbers are clear: the Romans counted about 4,000 dead, while the Carthaginians about 24,000 dead and 10,000 soldiers prisoners.

Hannibal managed to save himself and escape from the battlefield, but his fate was outlined: not only had lost almost all his army, but the humiliating defeat destroyed in a single stroke all the prestige that he had laboriously gained during the war.