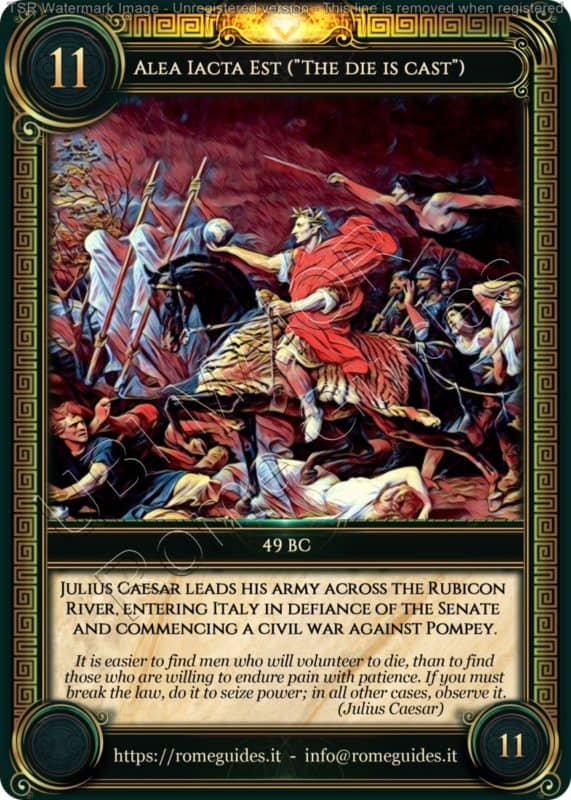 In the cold winter night between January 10th and 11th 49 BC, at the head of the 5000 soldiers and 300 horsemen that formed the Legio XIII Gemina (his most trusted unit, with which he had besieged Gergovia and Alesia, defeating Vercingetorix), Gaius Julius Caesar crossed the Rubicon river, thus starting the civil war that opposed him to the Roman Senate and to his rival Pompey.

The Rubicon river, in the Republican age, was the extreme northern boundary of the Pomerium, the boundary that separated Rome from the rest of the world and that the advance of the Roman legions had moved farther and farther from the perimeter of the city walls: the Roman laws forbade to lead armed troops beyond the borders of the Pomerium, under penalty of the automatic declaration of hostility towards the State.

Caesar, after the conquest of the Gallia, had received from the Senate the order to leave the proconsulate, to dismiss his army and to return to Rome: he understood that behind these orders was the ambition of his rival Pompey and of the Roman Senate.

At that point, Julius Caesar decided to cross the Rubicon River followed by his soldiers, exclaiming in Greek, according to the chronicle of the historian Suetonius, a phrase translated (perhaps incorrectly) into Latin as “Alea Iacta est!” (The die is cast).

The event, more symbolic than really effective from a military and strategic point of view, had the desired effect and sanctioned a real breakthrough in the history of Ancient Rome, disrupting political and institutional rules established over time: the senators hostile to Caesar fled to the East, while the Roman Republic finally realized how difficult it was to contain the ambition of competing parties (Populares versus Optimates) given the amount of the interests involved.