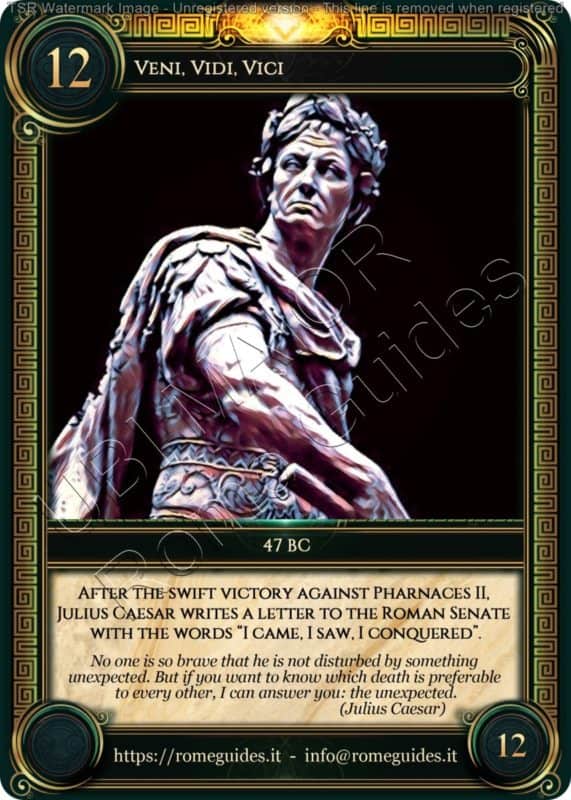 In 47 BC in Eastern Turkey took place the Battle of Zela, which takes its name from the modern city of Zile: this battle was fought between the Romans led by Julius Caesar and the army commanded by Farnace II, son of Mithridates VI and king of Pontus.

The defeat suffered twenty years earlier by Mithridates still burned in the soul of the Romans, who could not bear to be defeated in battle. When Mithridates was beaten by Pompey, Farnace rebelled against his father, who was forced to commit suicide, and he gave the Pontus to Rome, which transformed it into a Roman Province.

Taking advantage of the civil war between Caesar and Pompey, Farnace began a campaign of expansion, invading Colchis and occupying Cappadocia. The kings of these territories, frightened by the assaults, asked for help to Caesar’s lieutenant in the Asia Minor, but he was defeated by Farnace near Nicopolis.
Julius Caesar had to operate personally: at first he went to Antioch, subduing Syria, and then he moved to Cilicia and Cappadocia, heading against Farnace, whom he met on August 2nd 47 BC.

Farnace’s army occupied the hill dominated by the city of Zela, while Caesar led his army to a nearby hill. While the Romans were finalizing the emplacement, the enemies suddenly moved against them, catching them off guard as the Romans considered illogical to abandon an advantageous position like that of Zela to attack an uphill camp.

After the first moments of confusion, in which the Romans received the biggest losses of men, Caesar was able to organize his army (more trained and experienced than the enemy) in a line of defense, and then moved to the counterattack. The army of Farnace was forced to retreat haphazardly from the hill, only to be completely defeated.

It was a bloody but very short battle: it lasted less than five hours, at the end of which the army of Farnace, composed of 20,000 men, was completely annihilated.
After the victory, Caesar went to Zela and from there sent to Rome the famous message “Veni, vidi, vici” (I came, I saw, I conquered), and then carved these words on a marble cylinder.