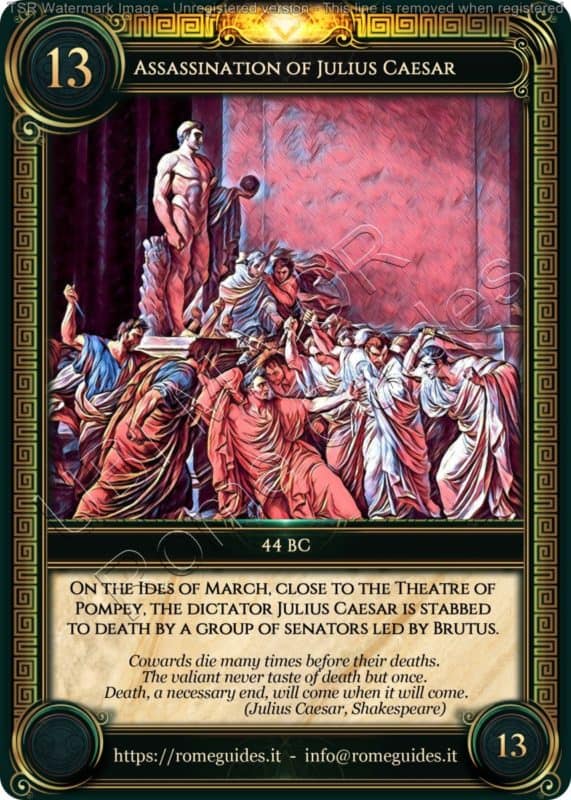 After having won the civil war against Pompey, Julius Caesar, who was already Pontifex Maximus, also became a Dictator for Life: with a series of reforms, he centralized in his hands always more power, adding to the dictatorship important civil prerogatives and gaining the most important privileges of the Tribunes of the Plebs.

Some people in Rome began to fear that Caesar wanted to establish an absolutist government, erasing the prerogatives of the Senate and the nobility. Twenty-three conspirators then organized a plot to kill the “tyrant”, in which participated not only some followers of Pompey graced by Caesar, but alsofew dictator’s friends , as Marcus Junius Brutus and Gaius Cassius Longinus. The lawyer Marcus Tullius Cicero, however, was not informed of the conspiracy because he had excessively appreciated the clemency and generosity shown by Caesar to the defeated opponents.

The implementation of the conspiracy was set for the Ides of March 44 BC: it was considered not impossible, given that Caesar, after the oath made by the senators to protect him, had discharged his bodyguard and was always unarmed in public.

In spite of the adverse omens and the attempts of a slave, of his wife Calpurnia and of the haruspex Spurinna, who tried to warn him about potential dangers, at 11.00 a.m. Caesar left his house without a guard escorting him and walked along the Holy Road between two wings of cheering crowd. Arrived in the Curia, while the conspirator Trebonius held the general Mark Antony with an excuse, Caesar was surrounded by conspirators.

Tullius Cimbrus threw himself at his feet, pretending to implore him and pulling his toga: it was the agreed signal. Publius Casca struck Caesar with his dagger, wounding him; he reacted shouting “Oh naughty Casca, what are you doing?“, pushing him away. Then the other conspirators were on him. When he saw the blade of Marcus Junius Brutus shining, Caesar fell bleeding at the foot of the statue of Pompey, ironically his enemy during the civil war a few years earlier.

The senators fled in panic, while the conspirators scattered in the squares to inform the people of the event. The body of Caesar remained in the Curia of Pompey for hours, before the doctor Antistione during his autopsy (the Lex Aquilia of 286 BC provided that it should be proved that the death had been violent and not natural causes) declared that the stab wounds received were twenty-three and of these only the second was fatal.

For sure Caesar did not pronounce the famous phrase “Tu quoque, Brute, fili mi“ (You too, Brutus, my son). According to the Roman historian Suetonius, he could have whispered at most the Greek expression “Kai su teknòn” (you too, son), because that was the language of the Roman elite; however, this version of the facts is doubted by Suetonius himself, according to whom Caesar, on that fateful day, emitted only a groan, without being able to utter a word.