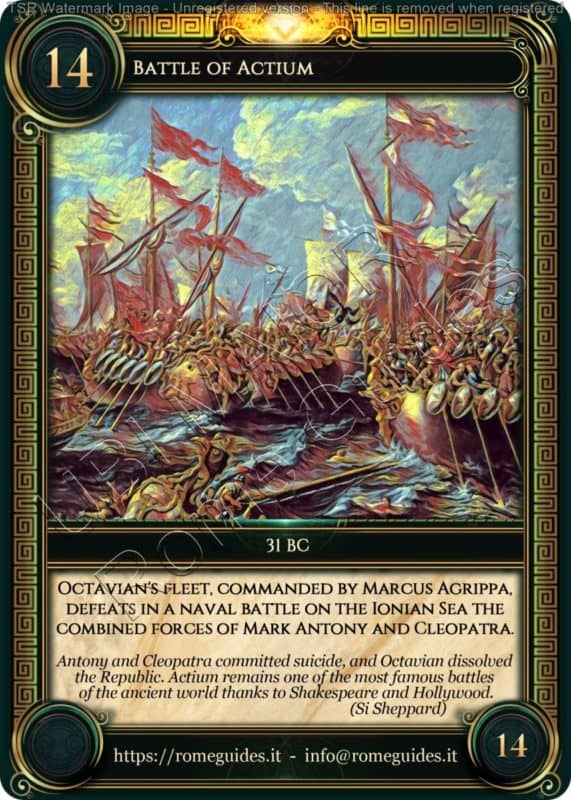 Two years after the assassination of Julius Caesar, in the Battle of Philippi, the triumvirs Anthony, Octavian and Lepidus defeated the conspirators Junius Brutus and Cassius Longinus. The Roman people hoped that the era of civil wars was finally over, but it was not so: thanks to an agreement sanctioned by the marriage between Mark Antony and Octavia (Octavian’s sister), Octavian controlled the Western Provinces, while Antony administered the domains of the East.

In the East, Antony met the queen of Egypt Cleopatra, whose charm had already seduced Julius Caesar. A loving and political alliance was born between the two, with Antony beginning to reign in Alexandria as an Eastern monarch, dreaming of an empire larger than that of Alexander the Great.

In 34 BC, Mark Antony drew up his last will, declaring in it that the new conquests and the territories already acquired from Egypt would have been divided between the three children he had with Cleopatra and Caesarion, son of Julius Caesar and Cleopatra.

Nothing remained for Rome, nothing was assigned to the Roman family of Mark Antony, who decided to repudiate Octavia in favor of Cleopatra. Octavian did not miss the opportunity and forced the Senate to declare war on Egypt: another civil war of Rome was disguised as the war of the Roman West against the weakness of the Eastern world.
The initiative started by Antony and Cleopatra, who decided to declare war on Rome by sailing with their fleet in the direction of Magna Graecia, but the bad weather played in favor of Octavian, forcing their fleet to move back to Greece, in the Bay of Actium.

On September 2nd 31 BC, in the bay of Actium, the fleets of Antony and Octavian faced each other. The battle was uncertain until midday when, suddenly, Cleopatra ordered to her sixty ships to retreat, forcing a disoriented Anthony to make the same choice: it was the episode that marked the destiny of the battle and the defeat of Anthony and Cleopatra. Octavian, following the suggestion of his admiral Marcus Agrippa, ordered his soldiers to launch fiery darts against the enemy ships, which began to catch fire: thousands of men died in the Greek waters of Actium, in a naval battle that saw Romans against Romans in a fratricidal clash.

Octavian won thanks to his strategy and the essential tactical and technical contribution of Marcus Agrippa. A year after the victory of Actium, Alexandria fell into the hands of Octavian; Antony preferred suicide to the dishonor of capture, and eleven days later Cleopatra decided to follow the fate of her lover thanks to the poison of a snake.

Octavian had Caesarion executed and turned Egypt into a Roman Province. The Battle of Actium decreed the beginning of the Principate of Octavian Augustus, who defined himself before the senators “primus inter pares” (first among equals), inaugurating the era of the Roman Empire.