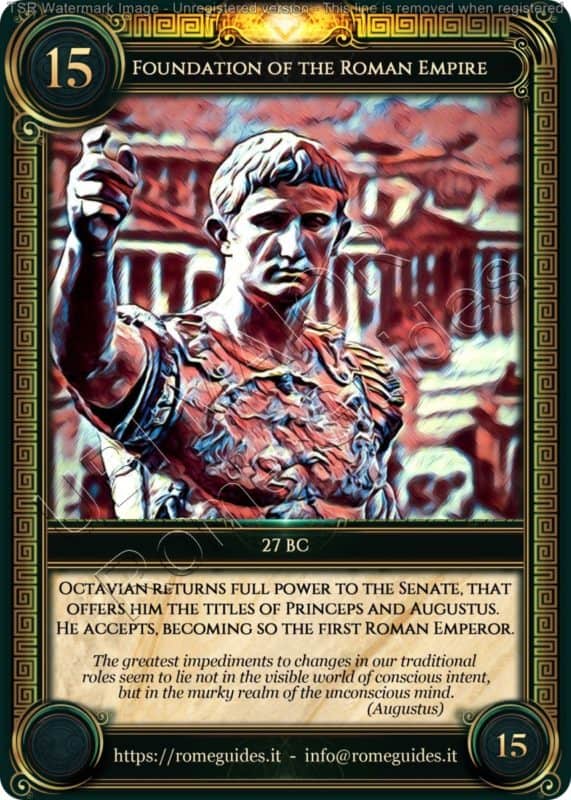 FOUNDATION OF THE ROMAN EMPIRE

With his victory over Mark Antony and Cleopatra in the Battle of Actium, Octavian had immensely strengthened his position, but he found himself managing a city that had been ravaged by civil wars for decades and was now almost lawless. In spite of this crisis, however, Rome was still not entirely willing to accept the control of a despot.

Octavian was clever. First, he disbanded his army and held elections: in this way he easily gained the prestigious position of Consul. In 27 BC he officially returned power to the Senate of Rome, and offered to give up his personal military rule and occupation of Egypt: not only the Senate rejected the proposal, but he was also given control of Spain, Gaul and Syria. A few weeks later, the Senate also granted him the appellation of “Augustus“ (venerable).

However, Augustus knew that the power necessary for absolute government would not have come from the Consulate. In 23 BC he renounced this office, but worked to achieve some prerogatives related to the ancient republican magistracies.

First of all, the Senate granted him for life the Tribunicia Potestas, originally connected to the Tribunes of the Plebs, which allowed him to convene the Senate, to submit matters to the Senators, to put the veto to the decisions of all the republican magistracies and especially to benefit from the sacred inviolability of his person. Octavian Augustus also received the Imperium Proconsulare Maius et Infinitum, the supreme command over all the militias in all the Provinces.

The conferral by the Senate of these two prerogatives therefore gave him supreme authority in all matters concerning the government of the territory. This was a real constitutional reform, with which Augustus concretely assumed the powers of an Emperor, although he continued to use the title of “Princeps”.

Octavian Augustus was not an extraordinary military strategist, but he was a master in the art of propaganda, with his popularity enhanced by the celebration of special games and events. The pacification of the civil wars was celebrated as a new golden age by contemporary writers and poets, such as Horace, Livy and especially Virgil.