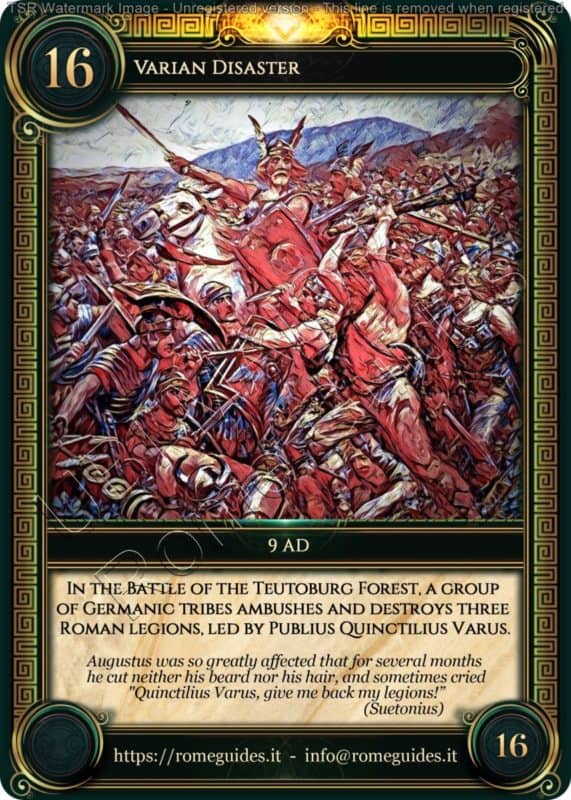 The Roman historian Suetonius reported that Augustus wandered around his house, head-butting doors and letting his beard grow in mourning, while shouting “Quinctilius Varus, give me back my legions!“. This was the violent and angry reaction of the Emperor when he realized the tremendous defeat of Varus and his army in the wooded Germanic lands in the month of September of 9 AD, which left an indelible mark in the historical memory of Rome.

What is commonly called the Battle of Teutoburg was actually a series of battles, lasting four days in total, which had as its epilogue the destruction of the army of Varus at the foot of the hill of Kalkriese.

Thirty years before, as soon as he became the first emperor of Rome, Augustus had launched himself to the conquest of the territories in the north-east, where the Germanic tribes lived: with his military campaigns, Augustus was convinced to have subdued the inhabitants of those lands, and for this reason he began to send in Germany his own Governors.

In the year 7 AD Publius Quinctilius Varus arrived. As it was customary in the lands of recent incorporation, the Governor carried out periodic expeditions with the aim of asserting Roman power and to establish the new administrative system. During the spring of the year 9 AD Varus organized a routine mission during which, in addition to collecting taxes and administering justice, he would have reviewed the garrisons located on the other side of the Rhine. In addition, if necessary, he would have taken punitive action against the tribes most reluctant to Roman rule.

Varus used three legions (the XVII, XVIII and XIX) in addition to six cohorts of infantry and three auxiliary wings of cavalry, for a total of 17,000 soldiers accompanied by about 4,000 civilians, including wives and children of the soldiers.

Counting on being in friendly territory, and trusting the information reported by Arminius, Varus did not give any importance to the news that arrived on the annihilation of some small Roman contingents by Germanic bands. In reality, behind these episodes there was nothing but the troops commanded by the same Arminius, who had designed a meticulous plan of attack: Varus, influenced by Arminius, on the way back decided to change the route to go to punish the guilty ones.

On September 7th, Arminius left with a handful of horsemen under the pretext of going to seek reinforcements: he had actually intended to join his army, about 25,000 men from different tribes.
The following day, the Romans entered the Teutoburgo Forest, which was so intricate that it slowed down the pace of the march and lengthened the column considerably, increasing the distance between the vanguard and the rearguard. Right there, in the middle of the forest, the expedition began to suffer the first coordinated attacks. As if that were not enough, a huge downpour made the terrain impracticable and limited further the movements of the Roman troops.

For two days the Germans never stopped ambushing, causing numerous casualties and undermining the morale of the Romans. Now aware of the situation, Varus decided to march towards the Rhine, where there were some Roman garrisons: on September 10th, however, the troops were still in the wooded area, in the middle of the dense vegetation.
When Arminius appeared with his cavalry, the hell broke out. The devastation caused by the attack was so overwhelming that Varus decided to commit suicide with his own sword, an example followed by the rest of the officers. Without command, the surviving forces tried to resist one more day, but on September 11th, decimated and demoralized, the troops were attacked by German forces led by Arminius. It was a massacre. Few managed to escape to tell what happened, while the Germans freely slaughtered and looted.

The news of the disaster and the panic spread quickly not only in the neighboring Provinces, but also in Rome, which feared the Germanic invasion of neighboring Gaul. Despite all the campaigns organized to punish the Germans and recover the lost confidence and pride, it was not possible to restore Roman dominion in those territories.