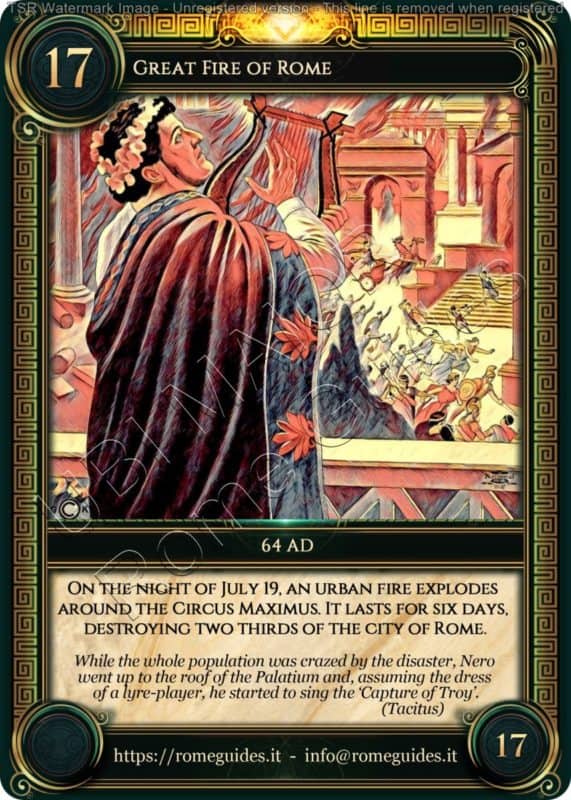 In 64 AD, in the city of Rome dominated by the Emperor Nero, there was a devastating fire, the most disastrous that has ever touched the Eternal City.

According to historians, the first outbreak of the Great Fire of Rome exploded close to the Circus Maximus, specifically in the area between the Palatine and Caelian hills. The neighborhood in question was characterized by the presence of workshops that made extensive use of flammable substances (cloth, wool, wood). These materials constituted a perfect trigger: the fire quickly moved to the stands of the Circus that, contrary to the image spread by classic Hollywood movies, were made of wood and not marble.

In the middle of summer, then, the conditions were perfect to favor the propagation of the flames that, pushed by the dry wind, passed quickly from one building to another. The houses stood adjacent to each other, separated by narrow and winding alleys that, besides not constituting valid barriers to the spread of fire, prevented people from escaping and rescuers from intervening.

For six days the flames raged in Rome without any of the strategies implemented to limit them gave favorable results: the Romans also tried to demolish entire buildings in order to create a vacuum around the fire and prevent it from spreading.
According to the chronicles of Tacitus, it was all useless: the fire devoured everything it came in contact with until the end of the sixth day, when Rome, now devastated for more than half of its surface, was under the illusion that everything was over.

Unfortunately, however, the flames returned to rise in the Emilian Gardens owned by Tigellinus, a faithful of Nero, who had long influenced the choices of the Emperor with ideas of unconventional economy. Again according to the historian Tacitus, one of these ideas was to finish razing the city to the ground in order to rebuild it with a new name that reminded Nero: Neronia.