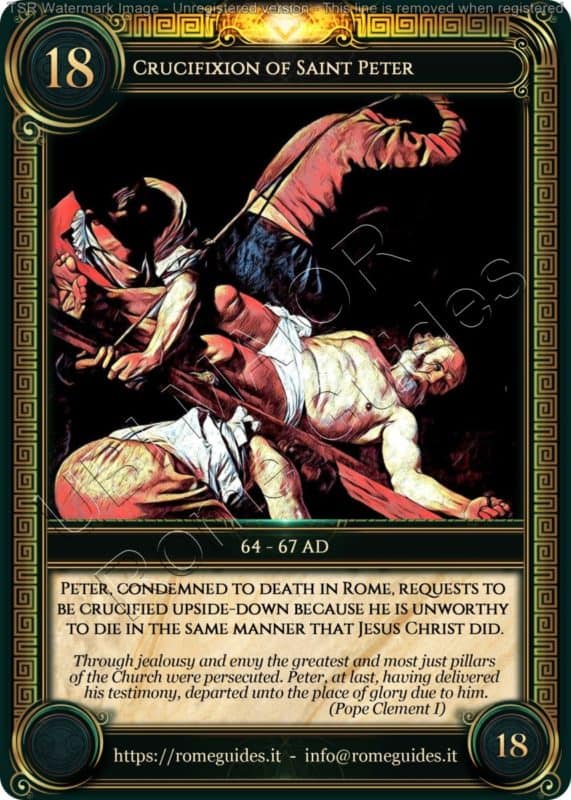 The Emperor Nero, to get rid of the accusation that he had caused the fire of Rome in order to make room for his Domus Aurea, threw the blame on the Christians, a religious community considered strange and mysterious at the time: their way of life, so secluded and different, seemed made on purpose to arouse the distrust of the people and accredit the worst suspicions. And so, under the empire of Nero, the first persecution against the Christians took place, during which Peter and Paul also died.

According to the historian Tacitus, the Christians were condemned to death with refined cruelty, so that their death was the target of mockery and derision, clearly visible in the gardens of Nero, as if they were shows similar to gladiators games or chariot races: some Christians were covered with animal skins and fed to dogs, others were smeared with pitch and burned alive slowly on tree trunks as flashlights in the night, and others were nailed to the cross.

Just such a crucifixion fate had to happen to the most illustrious of the Christians of that time, St. Peter.

In the iconology of the Saint, Peter is indeed always depicted crucified upside down. According to Christian tradition, it was the apostle himself (that must have been about 60-70 years old at the time of his martyrdom) who asked to be crucified upside down, as a sign of humility to Christ, who had been crucified with his head up before him.

Also if there is in Rome, at the top of the Janiculum Hill, the Bramante’s Temple built on the legendary place of the crucifixion of St. Peter, his martyrdom took place in the Ager Vaticanus: usually indeed the condemned ones were buried near the place of martyrdom and, according to the Acts of the Blessed Apostles, the body of Peter was buried “under the terebinth, next to the place of the naumachia in the Vatican“.

The place of St. Peter’s burial was a place of great veneration from the beginning and, according to tradition, also marked by a terebinth, a tree that would correspond to the turpentine tree.The terebinth is mentioned in many passages of scripture: this tree, because of its size and longevity, was used as a memorial to the dead.