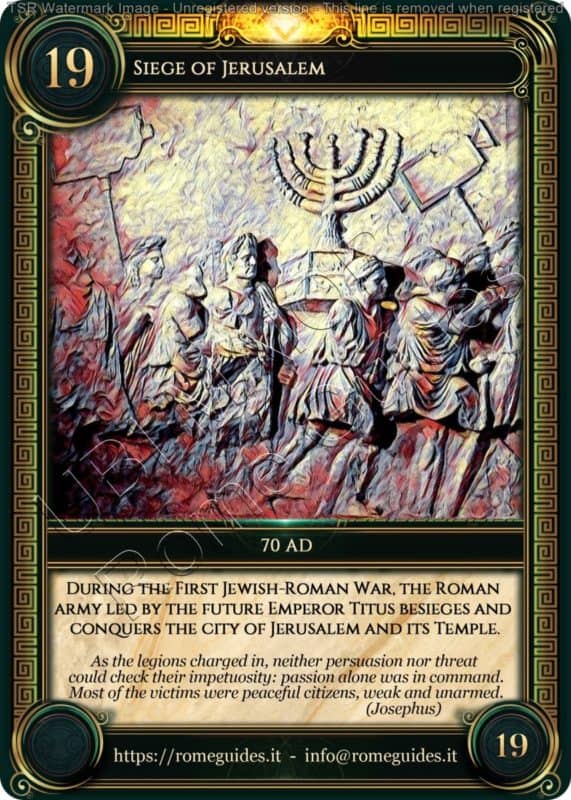 The destruction of the Temple of Jerusalem, in 70 AD, is an event that happened in the context of the First Judaic War that was fought between the Roman Empire and the rebellious Jews and that lasted from 66 to 70 (even if it continued with aftermath until 73 with the taking of the fortress of Masada).

The relations between the Romans and the Jewish community had become increasingly tense. In 66, the Procurator Augusti of Judea, Gessio Floro, demanded that a considerable amount of gold was taken from the Temple and, finding a strong opposition from the Jews, sent forward his soldiers, which caused the death of 3.600 people. This was the beginning of other clashes that led to a real revolt of the Jews in which also the Governor of Syria Gaius Cestius Gallus intervened, finding himself overwhelmed by a heavy defeat.

In 66, when Nero was informed of the defeat suffered in Judea, he was seized with great anxiety and fear and believed that only the general Vespasian would be up to the task and able to conduct a so important war, which threatened to expand to the whole East.

At the beginning of the military campaign (in 67 AD), Vespasian could count on three legions of 6,000 armed men each (the Legio V Macedonica, the Legio X Fretensis and the Legio XV Apollinaris, whose legatus was his son Titus), 23 cohorts, 6 cavalry alae and a large number of allied troops (15,000 armed), for a total of 60,000 armed men.

In January 70 AD, however, Vespasian was reached by the news that the Emperor Vitellius had died and that the Senate and the people of Rome had proclaimed him as Emperor: eager to sail to the capital, he sent his son Titus with large military forces to conquer Jerusalem and end the war in Judea.
The subsequent siege of the city of Jerusalem culminated on August 9th 70 AD with the burning of the Temple, while the banners of the legionaries were raised on the Eastern Gate.

A detailed account of the events of the entire war was written by the Jewish historian Flavius Josephus, who was initially one of the leaders of the revolt against the Romans in northern Galilee but later surrendered to the troops of Titus and Vespasian and became their ally. Based on his account, the numbers of the First Judaic War were 97,000 captured prisoners and over a million casualties, a number far greater than any other war before that time.