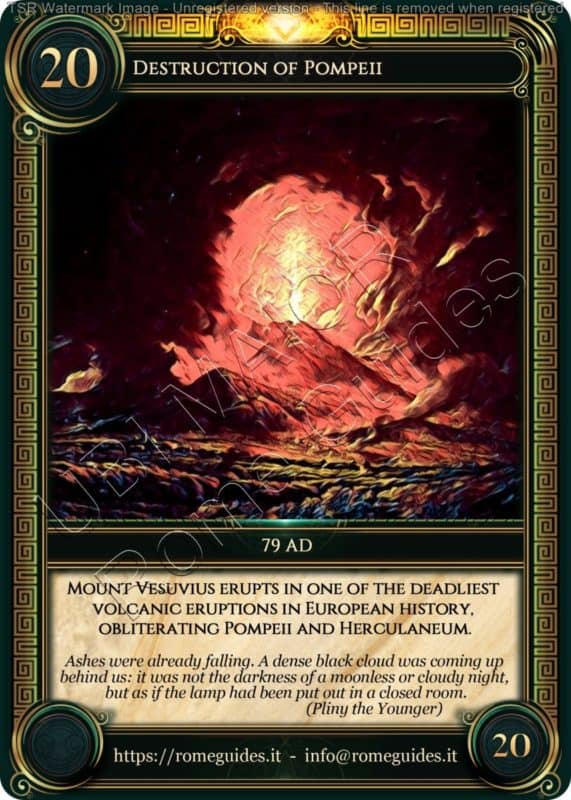 On August 24th (or perhaps October 24th, as proposed by some scholars according to recent findings) of 79 AD Vesuvius woke up, marking the history of volcanology with the most famous and spectacular eruption in the history of the world, which razed to the ground the cities of Pompeii and Herculaneum.

This tragedy was preceded by a violent premonitory earthquake in the area of Vesuvius that, in 62 AD, caused the collapse of some buildings with serious damages hitting also Naples and Nocera. At that time the event was not connected to the eruptive activity of the volcano, and for this reason during the period following the catastrophe the houses were rebuilt and the life of citizens resumed in full tranquility.

Seventeen years later, a strong seismic shock struck once again the vesuvian area. Even in this case the inhabitants, accustomed to the trembling of the earth, did not let themselves be influenced by the tremors and continued to crowd the squares and the roads of Pompeii and Herculaneum. It was a fatal mistake.

The awakening of Vesuvius occurred in three phases. According to the traditional version, the first one took place around 1.00 pm on August 24th, when a volcanic conduit opened after the contact between the magma and the water which triggered a series of explosions. In the second phase, over the volcano a column of gas formed, that obscured the sun and was accompanied by ash and white and gray pumice. Finally in the third and last phase, which occurred in the late morning of August 25th, the destruction of the surrounding cities was completed.

Among roars, ashes and lapilli someone tried to go away from the city, while others just found shelter in their homes. In Pompeii, shortly after the eruption, hundreds of people died suffocated by toxic gases, heat or killed by the collapse of the roofs. In Herculaneum the tragedy was consumed in particular during the night and in the early hours of the morning of August 25th when, after an apparent pause in the eruptive activity, many persons preferred to return to their homes. The magmatic material arrived in the city with a speed close to 100 km per hour and did not spare anything, including the few who tried to save themselves in the sea, which were overwhelmed by the flames and by the water that began to boil.
After about 25 hours of eruption Herculaneum, Pompeii and most of Stabia ceased to exist.

The eruption of 79 AD was described in detail in two letters written by Pliny the Younger, who experienced the tragedy in first person: “A cloud was rising, but whoever looked from afar could not specify from which mountain: no other plant better than the pine could reproduce the shape. Indeed, soaring so as to suggest the idea of a very tall trunk, it then expanded into what could be called branches“.
The date of the eruption would also be documented in the same letters of Pliny the Younger where you can read “nonum kal. septembres“, or 9 days before the Kalends of September (August 24th). Recent archaeological discoveries, however, have suggested that the eruption has occurred in the fall of that year, and precisely on October 24th.