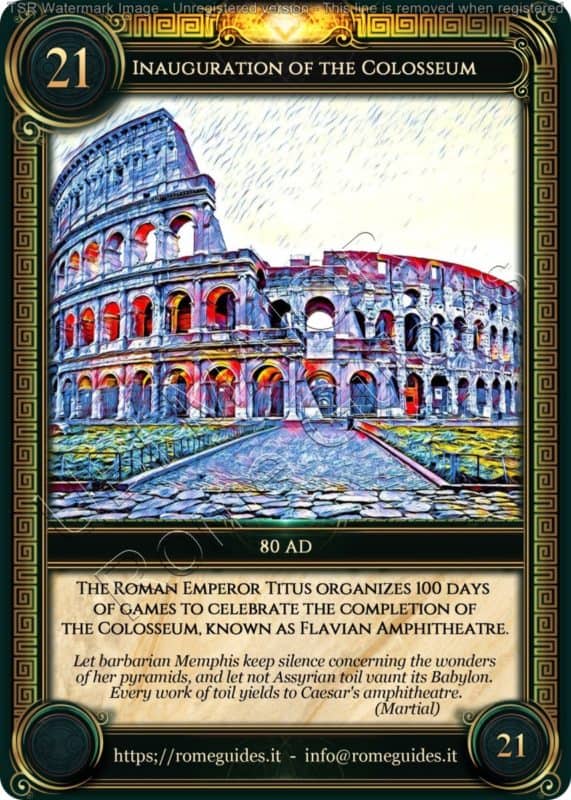 INAUGURATION OF THE COLOSSEUM

The construction of the Flavian Amphitheater was started by Vespasian in 71 AD and completed by his son Titus in 80 AD, in order to create the largest amphitheater of the ancient world. The name Colosseum became popular only later, probably in the Middle Ages, and derived from the proximity of the colossal bronze statue of Nero that stood near it.

The Colosseum was built with the specific purpose of giving Rome a place worthy of the fame of its gladiatorial games, which were previously held in the temporary wooden structure built by Nero in the Campus Martius after that the old Amphitheater of Statilius Taurus had been destroyed in the famous fire of 64 AD. Previously, the gladiator games took place in the Roman Forum, which was equipped for these occasions with mobile wooden structures.

The inauguration of this monument was a very solemn event in the history of Ancient Rome: it is described in great detail by the poet Martial, who in his work entitled “De Spectaculis” narrated what he saw with his own eyes during that particular ceremony.

The inauguration of the Colosseum was a grandiose event that lasted about 100 days, during which at least 9000 animals were killed. The inauguration was remembered not only for the spectacular hunts between men and animals (Martial narrated a fight between an elephant and a bull, with the elephant that, after the victory, knelt down in front of Titus, as if it were a spontaneous recognition of the strength of the Emperor), but also for the famous fights between gladiators: Martial lingered in particular on the fight between Priscus and Verus, whose outcome was totally unexpected. The two gladiators began to face each other armed with sword and shield, then both lost the shield and continued the battle until the people did not invoke the intervention of Emperor Titus, who sanctioned a historic verdict: the gladiators had fought so bravely, demonstrating the same immense value, that they were declared both winners.

Also the historian Cassius Dio, speaking of Titus and the memorable inauguration of the Colosseum, narrated a battle between four elephants and above all a famous naval battle: “Titus suddenly filled the amphitheater with water, and brought in horses and bulls and other trained animals that were instructed to stay in the water as well as on land. Then he brought in some ships, with men impersonating the soldiers of Corfu against those of Corinth”.