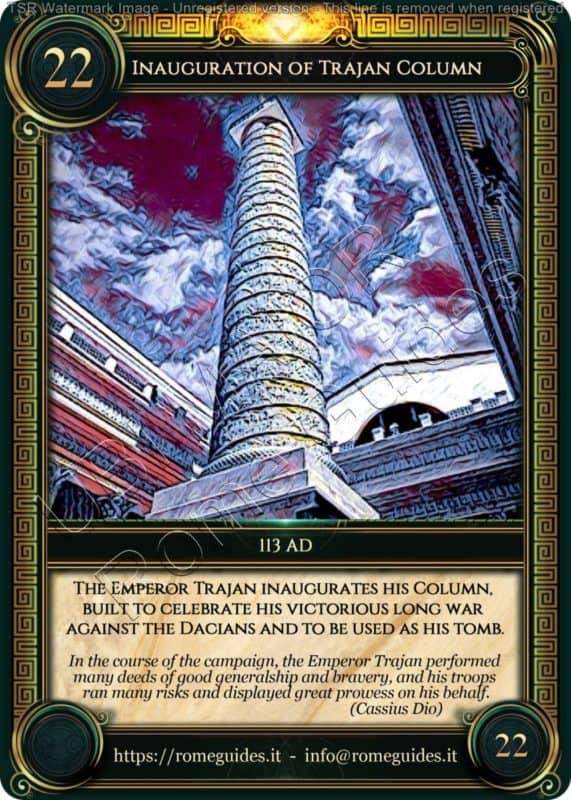 INAUGURATION OF THE TRAJAN COLUMN

The Trajan Column was erected in Rome to celebrate the conquest of Dacia by the Emperor Trajan: it was placed in the Forum of Trajan, in a small courtyard behind the Basilica Ulpia between two libraries.

The Trajan Column was an absolute innovation in Roman art and represented a completely autonomous artistic expression: it was inaugurated in 113 AD, with a long spiral frieze that wraps it from bottom to top describing the Dacian Wars (101-106), probably based on the lost Commentarii of the Emperor Trajan. An inscription from the Fasti Ostienses has also given us the exact date of the inauguration, May 12th.

The column had a practical function, witnessed by the inscription: on one side it had to remember the height of the hill before the excavation for the construction of the Forum of Trajan, and on the other side it had to hold the ashes of the Emperor after his death. In addition, the spiral frieze was intended to recall the exploits of Trajan celebrating him as an extraordinary military leader.

The Column of Trajan, one hundred Roman feet high (29.78 meters), consists of eighteen colossal blocks of Parian marble, each weighing about 40 tons and has a diameter of almost four meters. Originally, a bronze statue of Trajan was placed on top.

The high basement is adorned on three sides by bas-relief stacks of weapons, while the corners of the pedestal are arranged four eagles, which support a laurel wreath. In the inner cell of the base the ashes of Trajan and his wife Plotina were placed: from there a spiral staircase of 185 steps starts to reach the top, illuminated by 43 slits.

The 200 meters of the continuous historiated frieze are rolled 23 times around the shaft, as if it were a roll of papyrus or cloth, and feature about 150 scenes animated by about 2500 figures. The size of the frieze increases with height, so as to correct the upward perspective distortion.

The narration is organized chronologically: not only the salient scenes of the battles are represented, but also less important episodes such as scenes of marches and transfers of troops, construction of camps, speeches to the troops, ambassadorships, sacrifices to the gods, the torture of Roman prisoners by the Dacians, the suicide of the Dacian leaders with poison and the presentation of the head of Decebalus to Trajan. The scenes are set in well-characterized contexts, with rocks, trees and buildings: for this reason they seem to refer to specific episodes clearly present in the mind of the creator, rather than generic idealized representations.

The Column of Trajan was probably embellished by a splendid polychromy, and presented on the bas-relief small bronze weapons in miniature, put in the hands of the characters and today unfortunately lost.