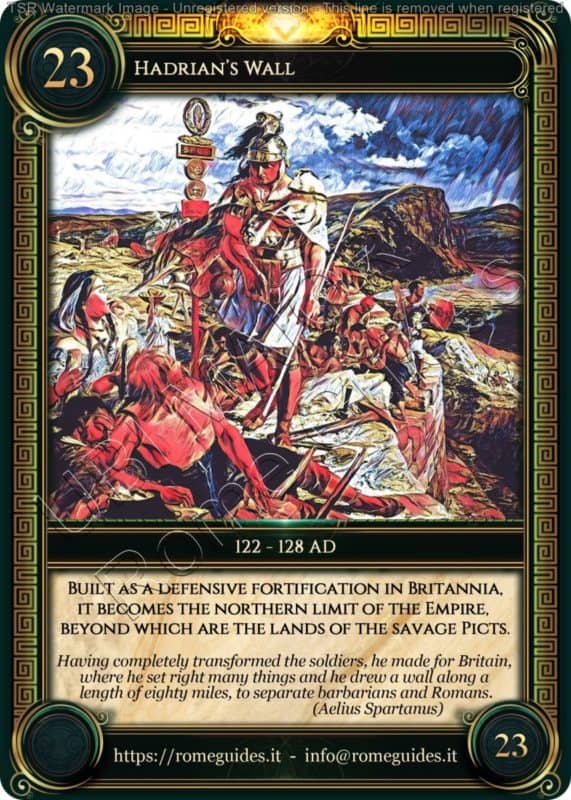 The Hadrian’s Wall (Vallum Hadriani) is a gigantic defensive work built between 122 and 128 AD, which ran from coast to coast for a length of about 72 miles (120 km). Hadrian’s Wall was intended to define the northern border of the Roman Empire in Britain, having as secondary objectives the limitation of immigration, the control of smuggling and the management of indigenous tribes north of the wall.

Publius Aelius Hadrian was a great traveler: he visited almost every Province of the Empire, personally inspecting and approving the sites he intended to use for his projects. Hadrian’s building projects, especially in Greece, are legendary and his predilection for ambitious works is exemplified by the Wall.

The work was begun in stone (unlike other fortifications that were initially made of wood) starting from the east and proceeding westward along rugged terrain, creating in the mind of the observers a shining example of the engineering glory of the ancient Romans.

This ambitious building project was completed within six years by the Roman legions settled in Britain. The wall was initially 3 meters wide and about 6 meters high to the east of the river Irthing, while it widened and lowered to the west of the river: along the wall there were between 14 and 17 defensive fortifications, garrisoned by Roman troops, and a very long moat (vallum) 6 meters wide ran parallel to it.

A few years later, in 142 AD, the moat was partially filled to facilitate the passage of troops intent on building the Antonine Wall, built by Emperor Antoninus Pius: with the construction of this new wall, the Hadrian’s Wall was abandoned as an outpost.

Following the Roman retreat from Britain, large portions of the wall were removed for building work by local inhabitants: some stones from Hadrian’s Wall still appear today in Monkwearmouth-Jarrow Abbey. In later centuries, other huge portions of the Wall were removed, used by British troops to provide pavement in the muddy paths during the suppression of the Jacobite Revolt of 1745.
Hadrian’s Wall might have completely disappeared if not for the efforts of the antiquarian John Clayton who, in 1834, began buying up the land around Hadrian’s Wall in an effort to preserve it. In 1987, the remains of Hadrian’s Wall were declared a UNESCO World Heritage Site.