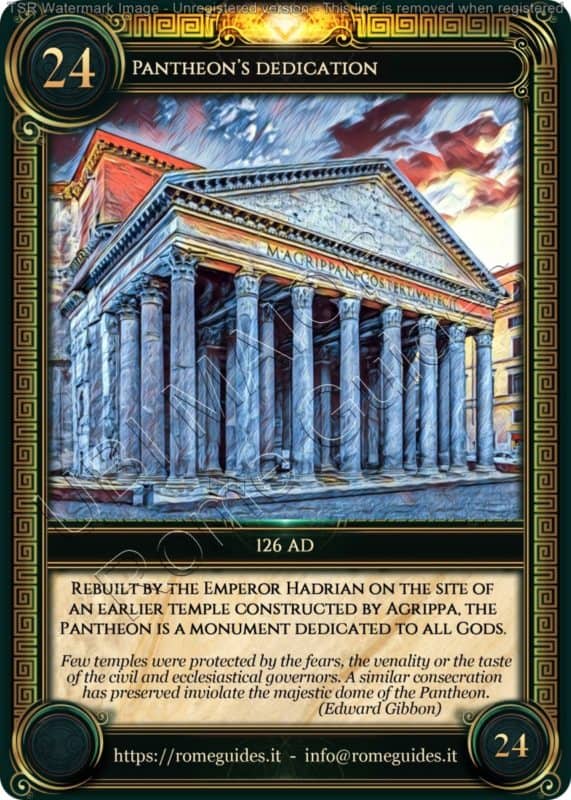 “The most beautiful remain of Roman antiquity. A temple that has suffered so little that it appears to us as the Romans must have seen it in their time“: it is how the writer Stendhal described the Pantheon in the 19th Century. Source of inspiration for the greatest architects of all ages and always admired for its beauty, harmony of lines and the perfect calculation of the geometry of the masses, the Pantheon is indeed the best preserved example of monumental Roman architecture.

Its history began in 27 BC, when Marcus Vipsanius Agrippa, son-in-law and close friend of the Emperor Augustus, had a first temple built in this area dedicated to “all the gods”. The present form, however, is due to the Emperor Hadrian who had it rebuilt between 118 and 126 AD, enlarging it, reversing its orientation and opening in front of the new temple a large porticoed square.

The building is composed of a cylindrical structure preceded by a portico with Corinthian columns; on the frieze of the entablature is preserved the original inscription with the dedication to Agrippa.

The large circular cell is surrounded by thick masonry walls and eight large pillars on which the weight of the peculiar hemispherical concrete dome is distributed, larger than that of St. Peter’s Basilica. What is most surprising about the architecture of the Pantheon are its dimensions: the height of the building is equal to the diameter of the dome, just over 43 meters, a characteristic that reflects the classical canons of rational Roman architecture.

The inner part of the dome is decorated with five orders of 28 coffers (number considered perfect because it is given by the sum 1+2+3+4+5+6+7) that shrink towards the top. In the center there is an oculus with a diameter of 8.92 meters, which allows natural light to penetrate and illuminate the whole building. On the summer solstice, the sun’s ray entering through the dome’s large eye projects a huge disc of light onto the floor, the same diameter as the oculus.

In case of rain, the water enters the Pantheon and disappears in the 22 almost invisible holes in the floor, which is mostly original and consists of squares and rounds of porphyry, yellow antique, granite and pavonazzetto marble.

Fallen into a state of abandonment and subsequently sacked by the barbarians, in 609 A.D. it was donated by the Byzantine emperor Foca to Pope Boniface IV who consecrated it dedicating it to St. Mary ad Martyres and preserving it in this way from the spoliation that affected many other ancient monuments in the Middle Ages.