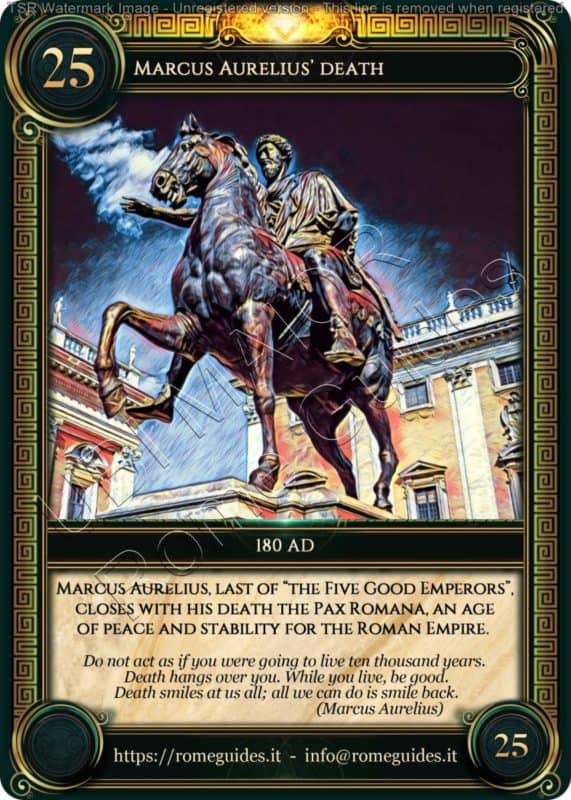 The Emperor Marcus Aurelius, considered one of the most enlightened thinkers and administrators of the Roman Empire, was a great lover of philosophy and used to repeat a famous phrase of Plato: “Cities would flourish if they were ruled by philosophers or if rulers ruled with philosophy“.

Unfortunately for him, Marcus Aurelius, so fond of peace, died on the military field. Sick with a mysterious disease (perhaps plague) in the camp near Vindobona during the third Campaign against the Marcomanni and Quadi (started in 178 AD), he called near him his son Commodus of which he had already begun to test the immorality and cruelty.

Marcus Aurelius asked his son to complete the war operations so that he was not pointed out as a traitor, but Commodus replied that he feared for his health and intended to leave the camp immediately for fear of being infected. Marcus Aurelius did not contradict him, leaving him free to act as he wanted, but begged him at least to wait a few days, until his death.

He certainly did not fear his death: “How beautiful is the soul that keeps itself ready, if it is necessary, to free itself immediately from the body“.
By now Marcus Aurelius wished to die. He fasted for five days in order to hasten death, and then on the sixth day he called his closest friends to him and asked them, “Why do you weep for me?” and seeing that they turned away from him fearing contagion, he exclaimed, “I see that you wish to take leave of me, but I do so before you and bid you farewell“.

On the seventh day, seeing his condition, he again called his son Commodus beside him then, after turning him away, he covered his head as if he wanted to sleep and during the night he expired.
It was 180 A.D. and died that day a great thinker and an extraordinary philosopher: in his memory was erected in Rome the beautiful and high column topped by the statue of the Emperor, to commemorate the victories on the Germanic front.

Commodus, his successor, turned out to be a real disgrace for the Roman Empire, and made widely regret the moral and military qualities of his father.