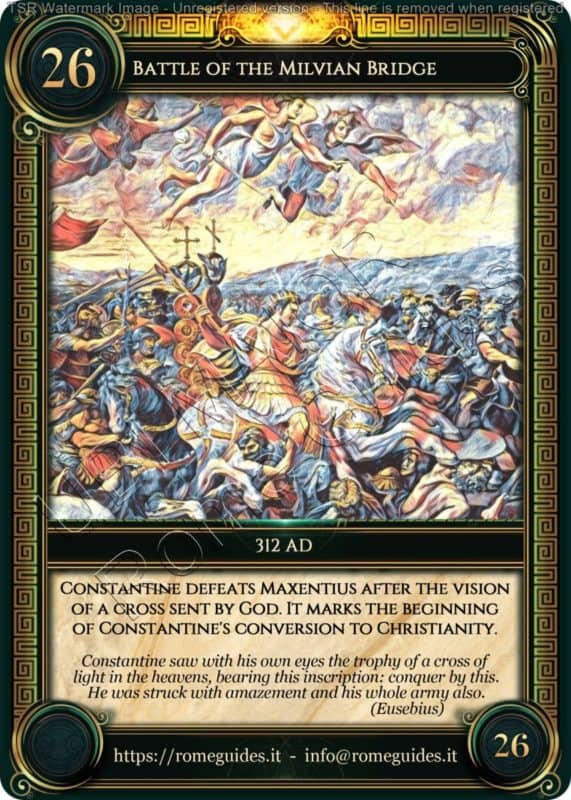 BATTLE OF THE MILVIAN BRIDGE

The so-called Battle of the Milvian Bridge, which took place on October 28th 312 AD, ended the reign of Maxentius and led to the affirmation of Constantine, with the beginning of a new era for the Roman Empire. Maxentius had proclaimed himself Roman Emperor in 306 AD, administering Italy and Africa and also obtaining the approval of the Roman Senate.

Reached Italy in the spring of 312 AD, Constantine defeated the army of Maxentius first in Turin and then in Verona, using the Flaminia Road to move towards Rome. The encampment was built in the small town of Malborghetto, on the right bank of the Tiber near the Milvian Bridge, which was behind the troops of Maxentius.

In that place Constantine affirmed that he had, in the late afternoon of October 27th, a miraculous apparition, narrated by Eusebius of Caesarea: looking towards the sun, Constantine saw a bright cross and under it was written in ancient Greek “Εν Τουτω Νικα”, translated in Latin with the sentence “In hoc signo vinces“ (with this sign you will win).

The problem was that Maxentius committed a huge mistake, placing his troops with the Tiber behind them. Constantine attacked immediately, destroying the wings of the military units of Maxentius, then assaulted the enemy infantrymen, realizing that they were not protected on the flanks. There was a violent and prolonged fight, which took place in the area of Saxa Rubra, which ended with the heavy military failure of the army of Maxentius. He, with part of his armed forces, tried to cross the Tiber river to get to safety, but drowned in its tumultuous waters because of the collapse of a wooden structure that his military engineers had built a short distance from the Milvian Bridge. The body of Maxentius was recovered and his head was brought in solemn parade by the military contingents of Constantine to celebrate the victory.

Constantine was welcomed triumphantly in Rome and formally declared the only existing emperor of the West. He dedicated his affirmation to the God of the Christians, whose systematic oppressions he prohibited: thanks to his protective work, Christianity could expand without its believers being repeatedly subjected to harmful and aggressive actions, while its official ministers of the cult obtained several advantages.