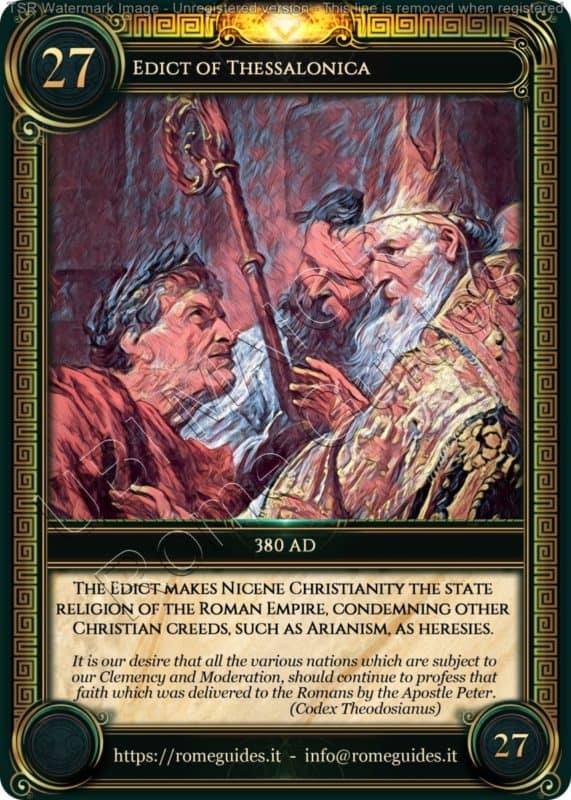 At the Council of Nicaea in 325 AD, the Emperor Constantine took over the presidency: the problem under debate was of a strictly theological nature, since the Arians denied the divine nature of Christ. The Council ended with the approval of the formula of faith concerning the oneness of God and the trinity of the divine persons.

After the death of Constantine, the religious situation remained very tense: the western part of the empire remained compactly Nicaean under Constantus, supporter of the confession of Nicaea, while the East, governed by the pro-Arian Constantius, rejected the trinitarian formula.

The crucial turning point in this complicated theological challenge came after the defeat of Adrianople in 378 AD, when the inexperienced Emperor Gratian called the general Theodosius to share with him the government of the Empire: as a firm believer in the Nicene faith, Theodosius was immediately interested in solving the religious problem, and on February 27th 380 AD he issued the Edict of Thessalonica.

In the Edict, Theodosius declared that Christianity was the official religion of the Empire, prohibiting, at the same time, Arianism and all pagan cults. The text of the document was very clear:
“We want all the peoples that we keep under our dominion follow the religion that St. Peter the Apostle taught to the Romans, now professed by Pontiff Damasus and Peter, bishop of Alexandria, a man of apostolic holiness; in accordance with the apostolic teaching and the Gospel doctrine, we will believe in the one divinity of the Father, the Son and the Holy Spirit in three equal persons. Those who follow this rule will be called Catholic Christians, while the others will be considered heretical fools; they will await both God’s vengeance and the severe punishments that our authority, enlightened by Divine Wisdom, will deem it necessary to inflict on them”.

A few months later, on November 24th 380, Theodosius decided with a sensational act to expel from Constantinople the Arian bishop Demophilus, replacing him with Gregory of Nazianzus, the patriarch of the small local community that followed the Nicene faith.