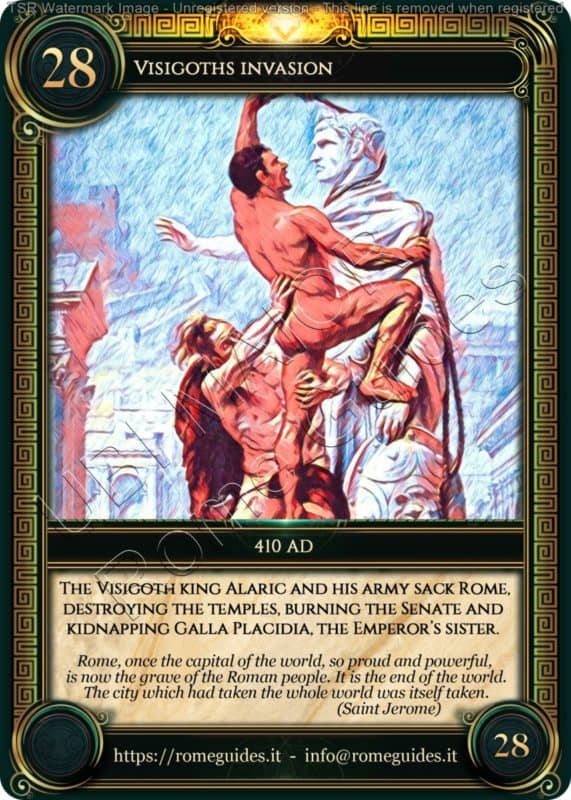 The Sack of Rome in 410 A.D. was the last act of a multi-year conflict between the Roman Empire and the Visigoths, a barbarian population coming from the Scandinavian countries. The Emperor Theodosius had managed to contain the Visigoth invasion by signing a non-aggression pact with the Visigoth king Atanaric.

At the death of Theodosius, however, the new barbarian king Alaric took advantage of the division of the Empire between the two sons of Theodosius: Arcadius in the East and Honorius in the West.
Honorius, succubus of a group of nobles who manipulated his will, condemned to death his general Stilicho, accused of being in connivance with Alaric: with the elimination of the most important military exponent of the Empire, the road to the Capital was opened to the Visigoths.

Once gained what he wanted, Alaric retired to the Roman countryside, but in 409 AD he again besieged Rome, with the intention of pushing the Senate to deny Honorius and to nominate as Emperor a person acceptable to him. Honorius, in spite of Alaric’s attempts to negotiate, was adamant: at this point a siege broke out, lasting five months, which brought Rome to its knees.

In the night between the 24th and 25th of August 410 AD, someone opened the Salaria Gate, allowing the Visigoths to break through the walls: the barbarians carried out plundering and destruction, looting homes and sacred places, emptying the warehouses of the city and imprisoning many Roman citizens.

After the Sack of Rome, Alaric decided to move towards Africa, considered the granary of the Empire. However, a storm in the vicinity of Reggio Calabria destroyed his fleet and Alaric, who fell ill, died suddenly near Cosenza. His death was seen by many as a divine revenge and provided an opportunity for St. Augustine to develop an apology of Christianity.