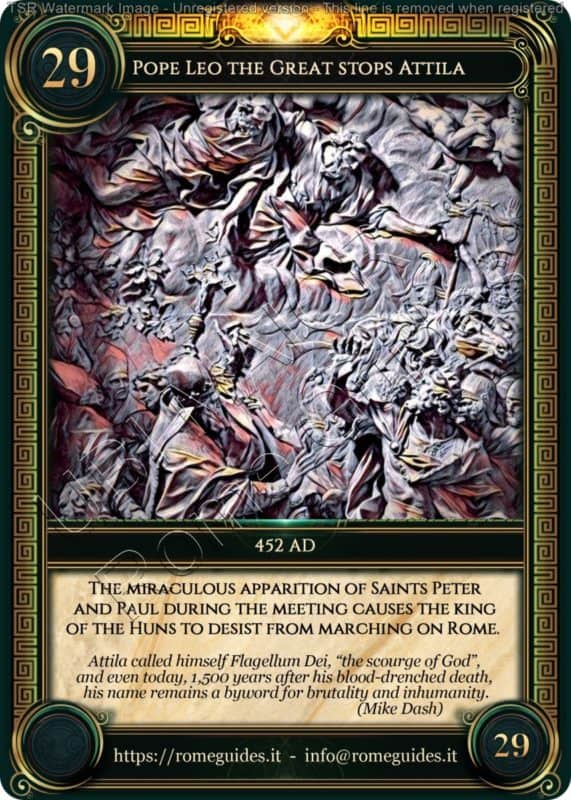 Leo I, Pontiff from 440 to 461, was the first Pope to whom posterity recognized the title of Magnus, or Great.
Leo the Great is known for having faced Attila, the leader of the Huns, armed only with the papal cross: after meeting him in 452 AD near the Mincio river, he convinced him not to march on Rome and to retreat beyond the Danube river.

The Hunnic ruler Attila is the most famous of the barbarian kings who challenged the Romans in the last decades of the Western Empire. He had the merit of unifying his people by conquering vast territories, and countless legends flourished about his ferocity, so much so that he was nicknamed the Scourge of God and that a rumor developed that no grass grew where he passed: he was even charged with episodes of cannibalism.

In the Germanic sagas, however, Attila was often represented as a wise, loyal and even merciful monarch; for the Hungarians, who have always considered themselves descendants of the Huns, Attila has always been considered a kind of hero.

In 452 Attila, after having sacked Aquileia, turned menacingly towards the central regions of Italy. A delegation from Rome, led by Pope Leo the Great, met the barbarian king not far from Mantua. After that meeting, Attila left Italy, most probably for military and political reasons, but the aura of sacredness emanating from the personality of Leo played an important role in that decision, making the Pope’s fame grow even more. The legend diffused in Christian circles was that St. Peter and St. Paul appeared next to the Pontiff, and that Attila was terrified by this vision and decided to give up the assault.

A few years later, in 455, the Pope Leo tried to repeat the feat, going to meet the Vandals’ king Genseric, who had already reached the walls of Rome: this time the Pope was not able to prevent the violent occupation of the city, but at least he obtained that the population was not subjected to tortures and massacres.