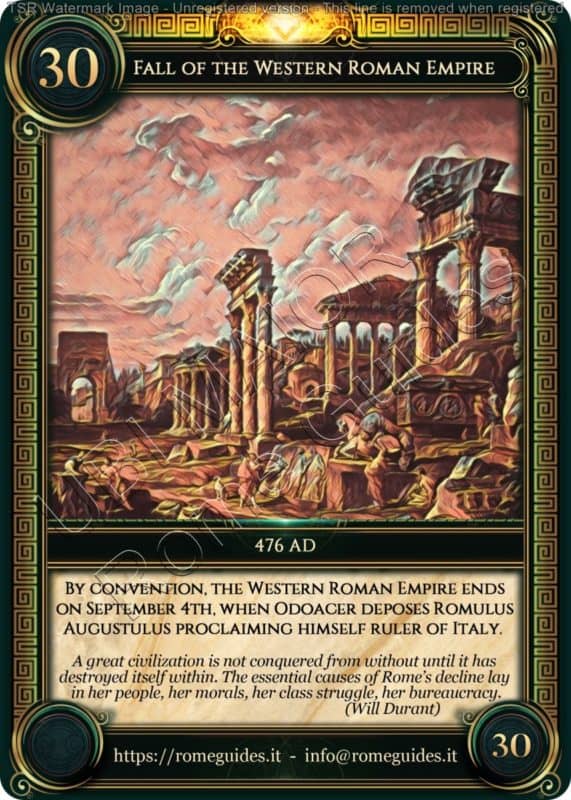 FALL OF THE WESTERN ROMAN EMPIRE

395 AD is the year in which, by convention, is dated the final separation between the two empires, the Western Roman Empire and the Eastern Roman Empire, with its capital in Constantinople: the second one was much more modern and powerful and with the authority to influence everything that happened in Europe. The Western Roman Empire formally ceased to exist on September 4th 476 AD, when the Germanic general and king of the Eruli Odoacer deposed the very young emperor Romulus Augustulus, sending him into exile in Naples and taking the title of Rex Italiae.

Romulus Augustulus, indeed, was not a proud and combative ruler, but a simple boy of thirteen years old who had been put in power by his father, the Roman general Flavius Orestes: in addition to his young age, he did not even enjoy the legitimacy of Constantinople, a detail that greatly reduced his authority at the political level. To gain power, Flavius Orestes used the soldiers commanded by the barbarian Odoacer, who was not an invader who came to destroy the city, but a foreigner who was serving in the Roman army, which in those years was almost entirely consisting of mercenaries.

However, when Odoacer, strengthened by his victory, asked for a third of the lands of Italy for himself and his soldiers, Flavius Orestes refused categorically, instilling discontent in the troops. The soldiers reacted with great violence, killing Flavius Orestes and defeating his army in Pavia. At that point, they besieged Ravenna (which had then become the Capital of the Western Empire instead of Rome) and banished Romulus Augustulus forever.

Objectively, however, it is necessary to consider that the crisis of the Western Roman Empire was much more ancient and dated back to at least a century before, when the Empire stopped managing effectively the populations that pressed on its borders. For centuries the Romans had allowed barbarians to enter and live within their territory, controlling the flow of immigration and forcing foreigners to adopt customs and traditions of the Roman gens: there are many stories of people of barbarian origin who made a career, especially in the military ranks.

Over time, however, the imperial state apparatus ceased to function properly and whole hordes of foreigners began to penetrate Europe without integrating, but invading (as in the case of the invasions of Visigoths and Vandals) and replacing the local authorities, gaining a leading role in the political life of the dying Empire.