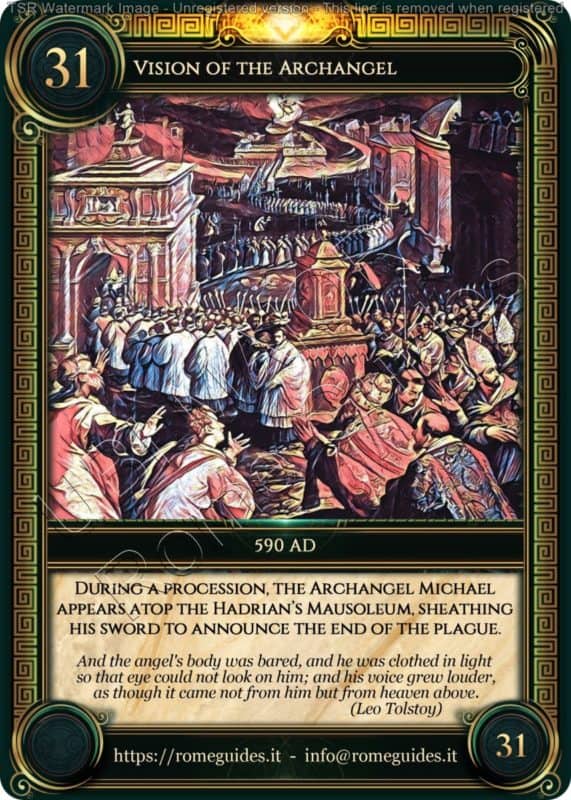 VISION OF THE ARCHANGEL

At the end of the 6th Century a severe plague devastated Rome, killing also Pope Pelagius II. The city was dirty, without water, littered with corpses in every corner of the streets, weakened by famine and abandoned by its governors: it was a very difficult time for Roman citizens, and when Pope Gregory I was elected to lead the Church he decided to immediately appeal to God’s mercy.

St. Gregory the Great (as he was later nicknamed) organized a huge procession through the city, inviting everyone to pray to God for the end of the plague. The Legenda Aurea narrated that the procession was led by an ancient image of the Virgin Mary, which was thought to have miraculously cleansed the air of the plague.

Pope Gregory ordered the procession to go on all day, making its way around the city while those who participated sang litanies. There were those who claimed that the poisonous dirt in the air escaped in front of the image of the Madonna, and that the air around it suddenly became pure and clean. Someone even claimed to hear distinctly the voices of angels around the image singing “Regina coeli laetare, alleluia!“.

The procession continued its journey through the streets of the city, until Pope Gregory arrived at the Mausoleum of Emperor Hadrian and witnessed a miraculous vision, which gave peace to his soul. At the top of the enormous Mausoleum, the Pontiff saw the archangel Michael clean a bloody sword and put it back in its sheath. Pope Gregory understood that this gesture put an end to the plague, as indeed happened, and from that moment the great Mausoleum was nicknamed St. Angel’s Castle.

Still today, on the top of it, stands the admirable bronze statue (made in 1753 by Peter Von Verschaffelt) of the Archangel Michael putting the sword back in its sheath, which is a constant reminder of God’s mercy and of his response to the prayers and supplications of his people.