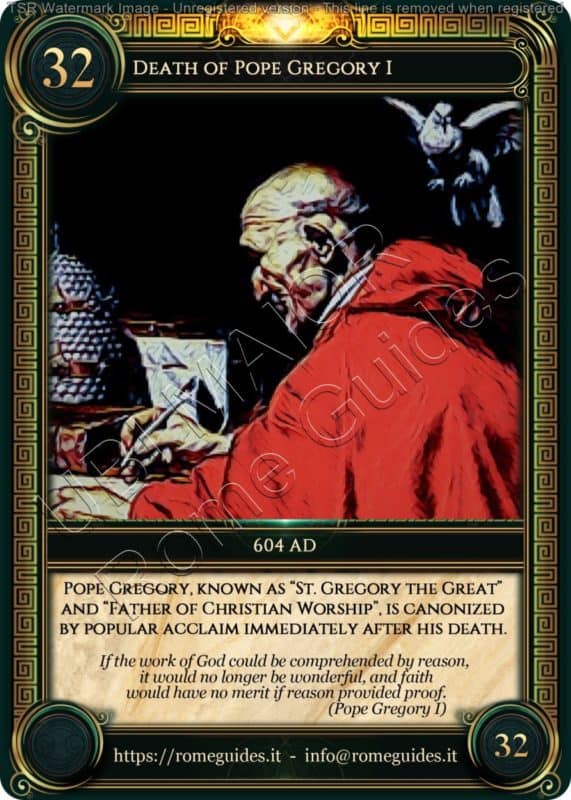 DEATH OF POPE GREGORY I

Gregory the Great was elected Pope in 590, when he was about fifty years old. He came from a wealthy patrician Roman family, and his youthful studies gave him a very high culture, particularly influenced by the doctrine of St. Augustine.

At the age of 35, after working in Rome as a Prefect, Gregory gave all his money to the poor, turned his family house into a monastery and became a monk. However, his culture was too immense to be confined in a convent, so Pope Pelagius II sent him as apostolic nuncio to Constantinople: there he remained until 586, gaining valuable friendships and extensive political experience.

When Pope Pelagius II died in 590, with the Western world in turmoil and Rome threatened by the Germanic Lombards, it was necessary to elect a man with a strong culture, energy and initiative. No one had any doubts as to who the chosen one should be: in his homilies, Gregory wrote “Cities are destroyed, our homeland is devastated. Where is the state of Rome, once the lover of the world?“

Gregory saw the Papacy as the rock on which to build a new spiritual empire and civil order, which made him an important predecessor to the medieval Popes. He converted the barbarians, firmly directed the city administration, eliminated abuses and violence, reorganized the finances and administration of the Church, wrote hundreds of homilies and commentaries on the books of the Bible, corrected the ancient liturgy and gave his name to Gregorian chant.

A man of extraordinary moral strength and unwavering faith, he died in 604 ravaged by arthritis. Considered an absolute spiritual authority of the Catholic Church and included among the four Doctors of the Western Church, he was immediately considered a Saint, celebrated on the day of his death (March 12th), and was buried in St. Peter’s Basilica. In all portraits of him, he is always accompanied by a white dove whispering in his ear: according to the traditional legend, he was discovered in this situation by his scribe, while the dove was dictating to him words inspired by the Holy Spirit.