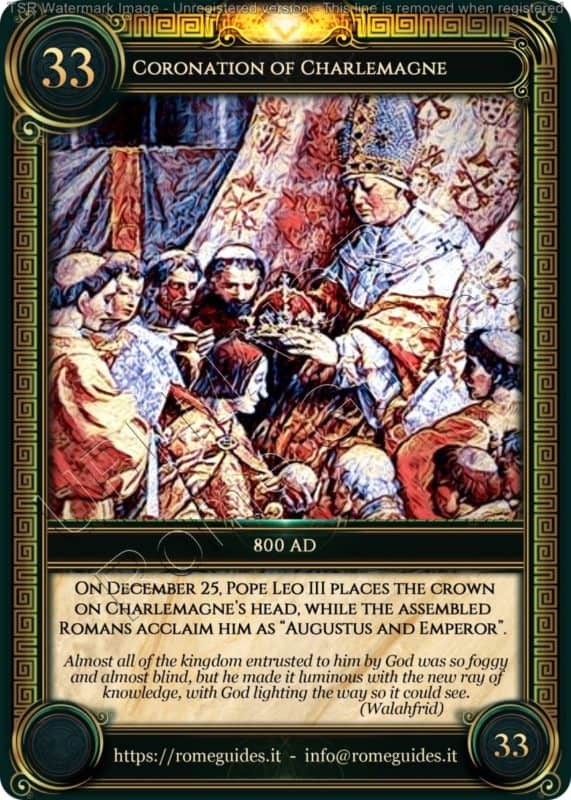 December 25th, in addition to being the date of the most important and heartfelt holiday for all Christians, is also the anniversary of one of the most important events in European history: the coronation of Charlemagne. This event had an impressive resonance because, after centuries since the fall of the Roman Empire, an Emperor had been appointed, acclaimed by the people of Rome and crowned by no less than the highest and most powerful figure of the time, the Pope, who bowed three times resting his forehead to the ground.

No one before Charlemagne had ever had the audacity to declare himself Emperor, since this title was considered excessively heavy for all individual rulers, also because formally an Emperor still existed and was the one who ruled the Eastern Roman Empire.

Charlemagne was an extraordinary man for his time: curious, polyglot, great general and above all a fine politician who had won the crown after sharing it with his brother without creating dynastic wars or rebellions. Thanks to all these qualities, under his reign the Franks experienced great economic and cultural development.

In 799, Pope Leo III was the victim of a revolt organized by his political opponents who, after accusing him of the sins of lust and perjury, captured and imprisoned him, but after a daring escape, the Pope found refuge at the court of Charlemagne. The King of the Franks, who had been appointed defender of Christianity and therefore of the Pope as well, found himself obliged to intervene to restore order to the Roman Curia: he therefore convened a council of bishops and cardinals, in which it was declared that the Pope was the highest authority on earth and that only God could judge his sins. Leo III was promptly absolved, also thanks to Charlemagne’s authority.

According to the traditional version, Charlemagne was at first surprised and then even opposed to the Pope’s will to crown him: in all probability, it was a propaganda tactic to create the image of the humble man who did not feel suitable for such an important and prestigious position. Pope Leo III, who owed his life to the King of the Franks, felt indebted to Charlemagne and therefore accepted to give him the Emperor’s crown, also to strengthen even more his position, since now there was no longer the King of the Franks to defend him, but the Emperor of the Holy Roman Empire.

On December 25th 800, during the Christmas Mass, Charlemagne was crowned Emperor, following all the rites of the tradition of biblical kings and being acclaimed loudly by the whole of Rome. This inaugurated a tradition that everyone would have to respect in the future, but above all it was the first time in centuries that Western Europe found itself united under a single banner: that of Charlemagne, Emperor of the Holy Roman Empire.