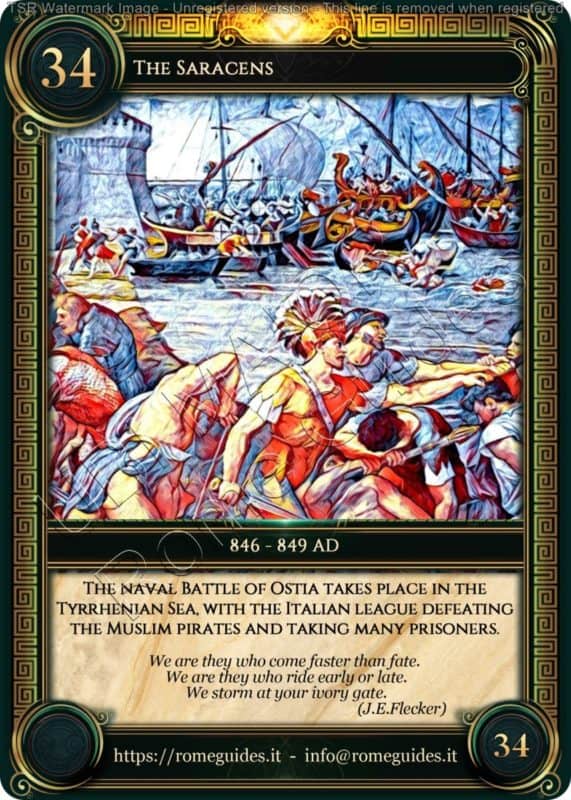 In the 8th Century, having completed the conquest of the African territories belonging to the Romans, the Saracens focused on two targets: Spain, the western gateway to Europe, and Constantinople, the symbol of imperial power. Throughout the 9th Century, the raids of the Saracen fleets continued to terrorize the coasts of Europe, and in particular those of Italy.

In 845, the Saracen fleet conquered the castle of Miseno, assaulting the bay where centuries before the Roman fleet was moored: it was a base of enormous strategic importance, since from there it was possible to organize fast raids towards all the Tyrrhenian coast. The idea was to conquer Rome: in the 9th Century, the city was far from the imperial splendor, with a population of less than 30,000 inhabitants and few citizen militia. Nevertheless, the prestige of Rome was still quite alive in the Arab world.

The Saracens arrived from the mouth of the Tiber with 73 ships and 11,000 men, and on August 23th 846 they easily conquered the fortifications of Ostia.

Although they were not able to penetrate the Aurelian Walls, built to resist large armies equipped with artillery, the Saracens attacked the two Basilicas of St. Peter and St. Paul, sacking them and stealing all their treasures.
Not satisfied, after this vilification, the Saracens marched along the Appian Way and reached Fondi, sacking the town and massacring its inhabitants, and then headed for the Monastery of Cassino, well known for its treasures. In 847, however, during the siege of Gaeta, the Saracens were surprised by a storm, and their fleet was swept away.

Pope Leo IV, mindful of the raid of 846, decided to restore the Aurelian Walls and the city gates; he also started the construction of the Leonine Walls, a horseshoe-shaped wall that, starting from the St. Angel’s Castle, was to protect the St. Peter’s Basilica. He also built two towers at the harbor of Ostia, united by a large chain, to prevent the Saracen ships could again go up the Tiber.

The precautions wanted by the Pope were justified in 849, when rumors reached Rome that a large Saracen fleet would soon be arrived. This time a large fleet was formed in collaboration with the Duchy of Naples; the Pope, at the head of the Roman militia, personally led them to join the Neapolitan ones, celebrating mass and imparting his blessing.
The battle between the Christian fleet and the Saracen fleet went on for several hours, but the outcome remained uncertain until the sky turned black and the south-westerly wind began to blow stronger and stronger. The Saracen fleet, composed of lighter hulls, was entirely destroyed, while the soldiers drowned or were taken prisoner. Most of them were put to hard labor at the Leonine Walls, which were completed in 852.