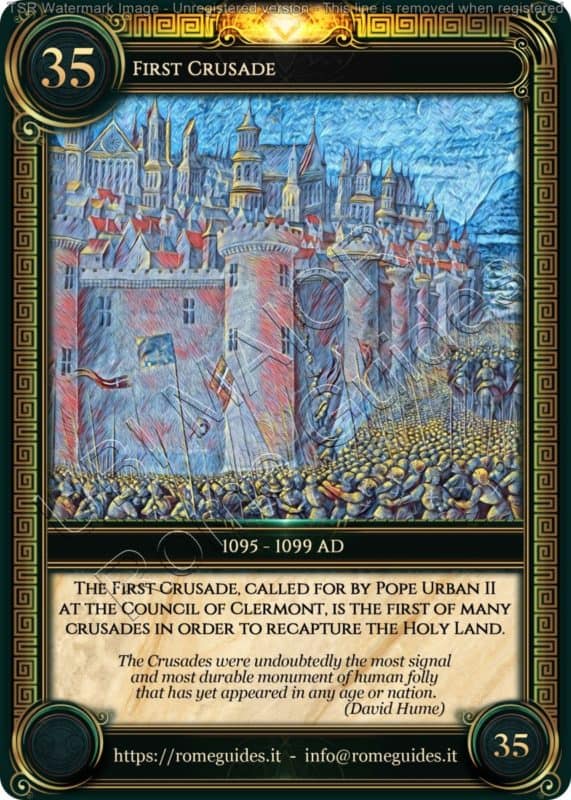 During the 11th Century, a multitude of pilgrims left Europe for the Holy Land in order to visit the place where Jesus Christ lived. During the reign of the Abbasid Caliphs of Baghdad, considering the economic benefits that Christians brought with their pilgrimage, they were free to visit the holy places: the pilgrims disembarked in the port of Haifa and from there proceeded to Jerusalem.

The situation changed in the second half of the 11th Century, when the Seljuk Turks took control of the region and began to kill the Christian pilgrims: the route became very unsafe, plagued by bandits who exterminated or imprisoned the peaceful pilgrims.

On November 27th 1095, the tenth day of the Council of Clermont, Pope Urban II called an “armed pilgrimage” in order to free the Holy Land from the infidels: the Pope therefore asked the Christian people of the West to take up weapons to help the Christians of the East. At the shout of “Deus vult” (God wants it) crowds of summarily armed pilgrims, composed mainly of poor people, women and children, left in the direction of the Holy Land.

When the pilgrims arrived in the Holy Land, however, they realized that markets had not yet been set up to feed such a large crowd: to survive, they turned to theft and looting, with the inevitable result of unleashing riots and violence that led to the almost total extermination of these pilgrims, so as to nickname this invasion “the Crusade of the Beggars“.

The first real crusade started in 1097 from Constantinople. The fighters were French, Danish, English, Normans, men in search of adventure and small feudal lords: the most famous names were those of Godfrey of Bouillon and Raymond of Saint Gilles. The first city to be conquered was Nicaea, which surrendered to the Byzantine Emperor. The bulk of the army arrived at Antioch, which was besieged for seven months: the city was conquered in 1098, when the Crusaders penetrated it, sacking it and massacring its inhabitants. In 1099, with the help of the Genoese, Jerusalem was also conquered and sacked, and then the so-called Christian kingdoms of the East were constituted.

To protect and reorganize the pilgrimages were established religious and chivalrous orders: in addition to the vows of poverty, chastity and obedience they also swore to fight perpetually against the infidels. The main orders were the Hospitallers, the Templars (so called because they lived on the site where once stood the Temple of Solomon in Jerusalem) and the Teutonic Knights.