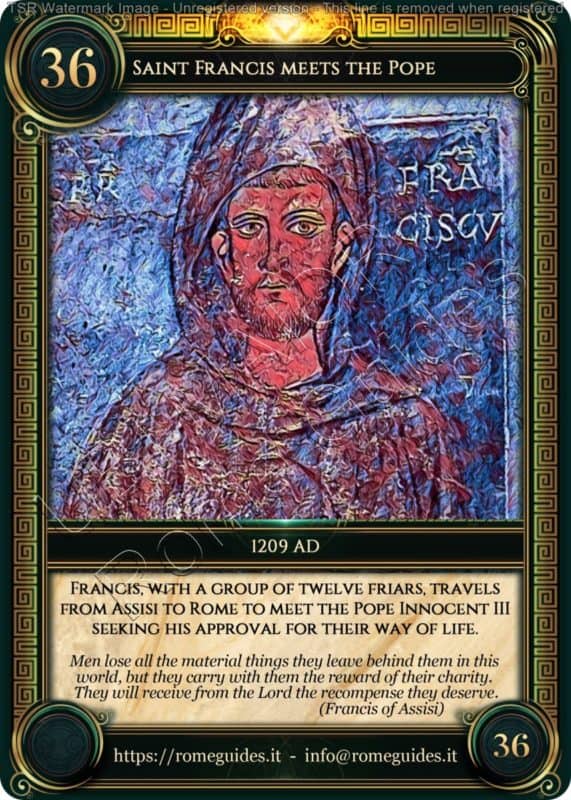 In 1209 the group of the first Franciscans gathered near the so-called Porziuncola, in the plain below the city of Assisi, beginning so a real “school of education“, where Francis transmitted to the companions the love towards Madonna Poverty, alternating to the prayer also the assistance to the lepers and the needy.

Since, however, the Franciscans were now beyond the competence of the Church and all the inhabitants of Assisi, and this could cause them some problems, the Bishop Guido recommended Francis and his group of friars to go to Rome to meet Pope Innocent III to have the Pontiff approve the first Rule of the new Order of Friars Minor.

Once in Rome, St. Francis and his companions had to wait almost three months outside the residence of the Pope, which was then located in the Lateran Palace, adjacent to the Basilica of St. John. The waiting was long and very tiring, because the Papal Guards, in the absence of authorization from the Pope, prevented them from entering the palace: Francis and his brothers were forced to sleep on the streets and live on alms.

Suddenly the Pope decided to allow them an audience: according to the traditional legend, this choice derived from the fact that the Pope had a dream, seeing the Basilica of St. John in Lateran in ruins, held up by a poor friar who supported it on his skeletal shoulders so that it would not fall. That friar, of course, was St. Francis of Assisi.

In front of Pope Innocent III, Francis set out his Rule for the friars, composed of evangelical phrases and rules of life. The Pope was happy to approve it, also because he understood that in order to counter the flourishing of popular religious movements that often spread heretical ideas, such as the Cathars, it was necessary to encourage the popular preaching of religious groups faithful to the Pope and to the tradition of the Church: after blessing the friars, he begged them to go around the world to proclaim the Word of God.