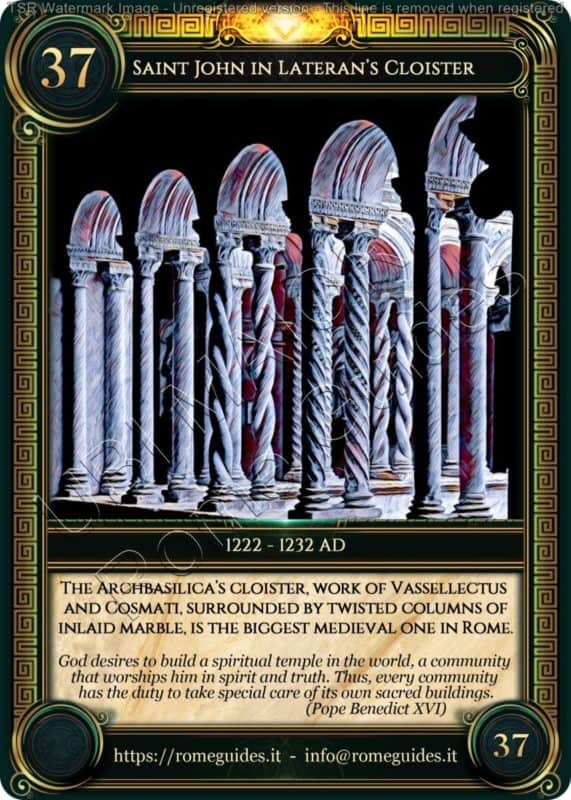 Pietro Vassalletto, a member of the famous family of Roman marble craftsmen, began to work on the reconstruction of the cloister of the Basilica of St. John in Lateran at the end of the Pontificate of Innocent III, and then continued during that of Honorius III: his son Nicholas finished it in 1232 during the Pontificate of Pope Gregory IX, as can be read in the inscription on the frieze of the portico.

The cloister, which has at its center a well known as the “Well of the Samaritan” dating back to the Carolingian period (8th-9th Century), is the largest medieval cloister in Rome, for the construction of which the Vassallettos did not recycle any ancient material.

The quadriporticus, with its Arab-Byzantine mosaic chromaticism, has five arches on each side divided by twisted, spiral, smooth or decorated with small mosaic tesserae columns. The most beautiful part of this place are the bas-reliefs above the arches that depict human masks, lion heads and leaf stems in spiral form. Below these bas-reliefs is a magnificent frieze, consisting of marble squares and rounds, which are also flanked by the figures of stars and polygons.

The decorations, which reproduce vegetable and animal motifs, make it possible to understand the strong influence of Egyptian and Arab tradition in the work carried out by the Vassalletto family.

Among the works of art inside the Cloister, it is possible to admire the copy of the Bull of Pope Gregory XI (Avignon, January 23th 1372) on the primacy of the Archbasilica of St. John in Lateran, the sepulchral monument by Arnolfo di Cambio intended for Cardinal Riccardo degli Annibaldi and the tomb fragment of the famous humanist Lorenzo Valla (1465).