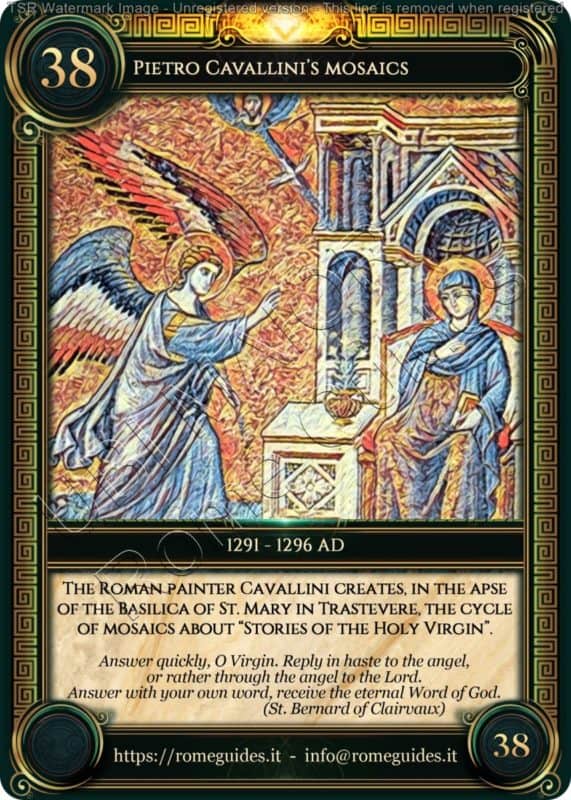 Inside the Church of St. Mary in Trastevere, below the apse and on the sides of it, the great medieval artist Pietro Cavallini created something that, without a shadow of a doubt, was his masterpiece.

He realized six scenes representing the episodes of the life of Mary: the Birth of the Virgin, the Annunciation, the Nativity, the Adoration of the Magi, the Presentation in the Temple, the Death of Mary. To these he added a seventh one, placed slightly lower, in which he represented the commissioner of the work, the Cardinal Bartolomeo Stefaneschi, presented by St. Peter and St. Paul while offering the mosaics to the Virgin Mary.

Beyond the very high aesthetic value of the work, this cycle of mosaics has an importance for the history of art that goes beyond beauty. Pietro Cavallini is the protagonist of an authentic innovation, abandoning the Byzantine staticity to make the characters act in a space endowed with a renewed “classical” breath and with a very personal use of colors: he contributed to create three-dimensional volumes defined by a soft and gradual light, almost as if he treated the mosaic with the fluency of a fresco.

In the Church of St. Mary in Trastevere, Pietro Cavallini saw the glittering gold that characterized the mosaic of the apse, and he had to deal with it: it was a true triumph of gold, precious stones and sumptuous clothes.
Therefore, Cavallini chose to represent his scenes with the traditional Byzantine background as well, but then transformed the mosaic into a painting. Pietro Cavallini worked using the mosaic tiles as if they were brushstrokes, playing on the nuances of color of tiny tiles to generate chiaroscuro effects and shimmering colors (as in the wings of his angels).

Cavallini adds to it perspective and three-dimensionality, very common among Roman artists, entering into this universe without fear, also building architectures particularly articulated as in the Annunciation.

The mosaics of Pietro Cavallini represented, basically, the first examples of a new pictorial sensitivity that matured in the last two decades of the 13th Century, abandoning so the traditional medieval static.