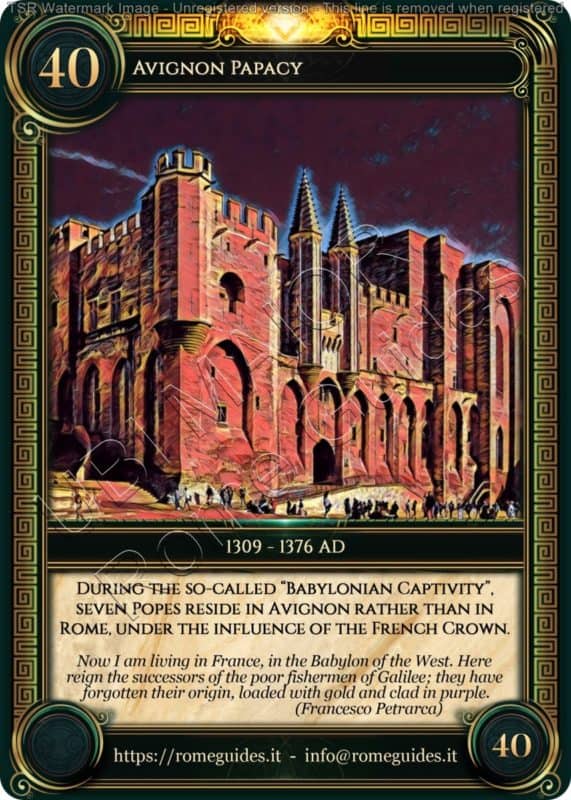 The Avignon Captivity is the historical period between 1309 and 1377, during which the papal seat was transferred to Avignon. It all started because of the contrasts between the Pope Boniface VIII and the French King Philip the Fair.

Among the measures issued by Boniface VIII there was indeed the Bull “Clericis Laicos“, with which the Pope forbade the clergy to pay to the kings any kind of subsidy without his permission. Philip the Fair completely refused the application of this Bull. Boniface VIII, in 1301, intensified the duel, issuing the second Bull “Ausculta fili“, with which he sanctioned his own superiority over all earthly powers, and the third Bull “Unam Sanctam“, with which he declared the papal power as universal, extended to both the temporal and the spiritual dimension. In reaction to this, the King of France had Boniface VIII judged as a heretic and simoniac by a council of jurists.

So, a large group of soldiers was sent to Anagni to arrest the Pope: the Pontiff avoided being arrested thanks to a popular uprising, but he could not escape from the slap that Sciarra Colonna gave him.

Boniface VIII died a few weeks later and the Conclave elected as his successor Benedict XI, who tried to heal the conflicts with the King of France, but unfortuntaly died after only eight months of pontificate.

At this point the Conclave, determined to keep a more conciliatory attitude towards the French monarchy, elected as Pope the Archbishop of Bordeaux, Clement V, who in 1309 moved the Holy See to Avignon, with the excuse that Rome was unsafe, thus beginning the period of the so-called Avignon Captivity. After more than a thousand years, Rome lost its role as the capital of Christianity.
During the Avignon Captivity, seven Popes, all French, acted under the direct control of the French monarchy.

It was only in 1377 that the Papacy was again moved to Rome by Gregory XI, encouraged by St. Catherine of Siena. The following year the Pope died and the Roman cardinals elected the neapolitan Pope Urban VI. The election, however, was contested by the French cardinals who opposed another Pope, Clement VII, forcing the various European Countries to choose between one and the other. This was the beginning of the Western Schism, which tore the Church apart.