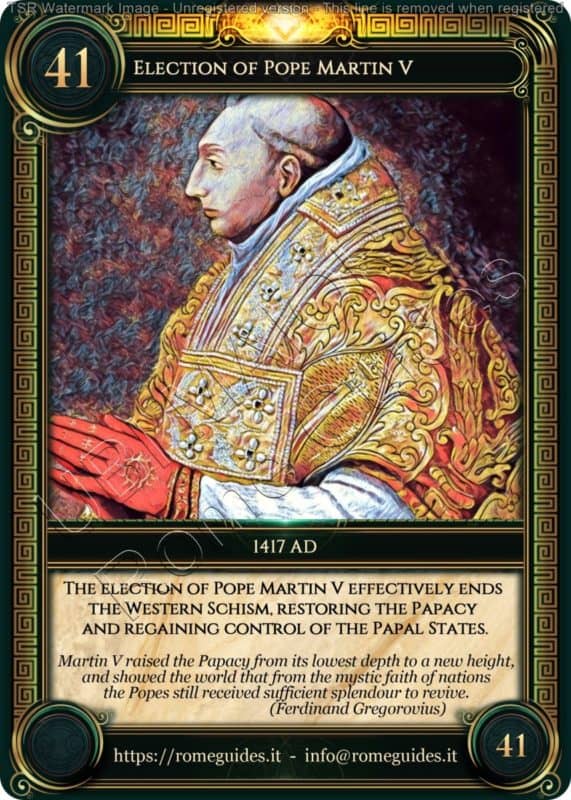 When he was elected Pope by the Conclave, on November 11th 1417, Oddone Colonna chose the name Martin V, because it was precisely on the feast day of St. Martin.

The Christian world breathed a sigh of relief at his election, because everyone loved and respected that cardinal for his integrity, wisdom, affability and humility, combined with an impressive culture, since there was no doctrine in which he was not excellent.

When he was elected, at the Council of Constance, he was 50 years old and at the peak of his physical health: his entry into Rome, on September 28th 1420, took place amidst the acclamations of an entire people that in the Pope Martin V, after the slavery of Avignon, recognized its leader. Many historians defined that day as “the second Christmas of Rome“.

As soon as he arrived in Rome, Pope Martin stayed in the monastery of the Virgin Mary of the People, but later he did not choose the Vatican as his seat, having another project.

He preferred to build a sumptuous palace on the foundations of the old family castle, which was restored several times in the following centuries and which still today contains a splendid artistic collection: the Colonna Palace, that became his papal residence.

The stay of Pope Martin V in Rome literally revitalized the Eternal City, which from being the Capital of the most glorious Empire in the world had become a mass of pagan ruins with muddy and grassy streets, with tumbledown hovels in the middle of the turreted palaces of the nobles always fighting each other.

The pontificate of Martin V shone for its vibrant activity. The Pope was able to settle the disagreements that occurred in that turbulent era, sedating popular uprisings and suppressing banditry. At the town-planning level, he had the streets paved again and the basilicas, the churches and the Capitol restored. Above all, however, the Pope gave a turning point to the Christian world, overcoming the schisms that continually arose in Europe, and gave a strong impulse to art and literature, so as to be considered the true Father of the Italian Renaissance: he was the one who called to Rome great artists such as Gentile from Fabriano, Pisanello and Masaccio.